The U.S. Air Force is a very tolerant organization.

In January 2010, the Air Force Academy decided to add a worship area for followers of Earth-centered religions. It's all about respect. Almost no one has noticed it until this week.


Sgt Brandon Longcrier became one of the most powerful people in the U.S. Air Force - he is also an official high priest who covers all druids, wiccans, New Age religious believers, and witches in general. The U.S. Air Force has added a pagan altar to its chapel so that the followers of witchcraft may practice their holy art on a regular fashion in front of all friends and they are no longer ostracized. ;-)

The bosses of the U.S. Air Force have explained that the U.S. Constitution makes the construction of a pagan altar mandatory. So on Tuesday, they built some additional stones around the altar: Daily Mail, The Washington Times, and five other sources. 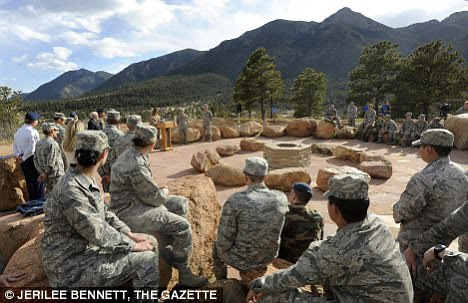 If you own a company or if you are a director or a principal, you are obliged to add a similar worship area for your employees and students who are Witch Americans. (About 1-1.5 percent of the U.S. citizens are Wiccans. If true, this actually matches Islam and Judaism, and beats Hinduism and Buddhism.) If you wonder what the shape means, the structure above is the ground floor of a future wicker man.

If you don't know, wiccans are members of a modern witchcraft religion born in the 1950s and the 1960s. On the other hand, druids were high priests of a pagan religion in the Celtic lands during the Iron Age (1200 BC - 400 AD or so). They enjoyed human sacrifice - which was not a big deal for them because they also believed reincarnation. Their beliefs were only being transmitted orally and the tradition system was largely eliminated during the era of the Roman Empire. It's back! Sgr Brandon Longcrier hasn't clarified whether he enjoys human sacrifice, too. But be careful! Weather-related petitionary prayer could cause environmental catastrophes, scientists warn.

A Texas pagan high priest has already said that this would only be possible in America. I kind of think that he is right. ;-)

CIA and the Pentagon have previously opened a new worship area for the AGW believers right in the middle of the Pentagon in Washington D.C.

The Washington Times also mention that the U.S. military has also started to use a new green ammo M855A1 which has the advantage that if you use it often, you will ultimately reduce the CO2 emissions. ;-)

(No, the real reason is that there's no lead in the projectile.)