A rather remarkable triplet of similar events with the dijet energy near 3.33 TeV is the most spectacular hint of a new particle

Note that two days ago, I discussed the string theory Z'-boson explanation of the 150 GeV CDF Wjj bump. The newest paper predicted another Z''-boson with the mass of 3.* TeV - page 7 top. With a modest dose of optimism, ATLAS has just confirmed a stringy prediction. 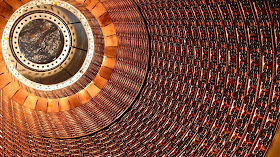 Phil Gibbs was the first man who spotted three radically new ATLAS preprints on a CERN page that at least two of us constantly watch. ;-)


The luminosity 43/pb in 2010 was small enough so that the chances of getting new exciting results were a matter of wishful thinking - a price in lottery (not necessarily the highest one) that physicists could win. Papers predicting new physics to be seen after 43/pb were "contrived" - the authors resemble gamblers who just want to imagine that sensations and Nobel prizes for them are waiting "right behind the corner".

While most authors who predict and discuss new physics at the LHC usually talk about 1/fb of the 7 TeV data or more, I think that those 200/pb = 0.2/fb is already starting to be significant and the three new papers that have found nothing are starting to substantially increase the probability that the LHC will see (almost) nothing - except for some kind of the Higgs sector.

I think that the first papers with a qualitatively higher luminosity contain much more information than the generic papers that were published "routinely". It's pretty clear that none of the standard methods can find anything new in 43/pb of the data and the new papers based on the 43/pb data quickly became redundant.

With the 205/pb of the data, it's different. The signal-to-noise ratio (the number of "sigmas") would more than double between 43/pb and 205/pb, so 2-sigma hints would become 4-sigma or 5-sigma signals in the new ensemble. That didn't happen.

However, three papers are still too little. It can't be excluded that these particular tests - dijet mass distribution and muon+MET states - were published first exactly because they don't see anything, so no further tests of their big and novel claims are needed (because there aren't any). However, the papers above already surely eliminate some models that were relatively close to the previous "boundary of our knowledge".

Some detailed impact of the three papers

The first paper on the dijet spectrum, extending this March 2011 preprint, mostly eliminates excited quarks and axigluons (and some RH black holes and perhaps other animals, but less clearly so). If you care about small hints, the first paper shows a 2-sigma excess for dijet energy of 3.333 TeV :-) plus minus 33 GeV or so, and they also show the picture of several events near this point. Because the expected number of events at even higher energy is lower, one event with the dijet energy of 4.040 TeV (the winner of the highest-energy championship) is enough to be a 1.8-sigma excess, too.

I would actually bet that the three events at 3.333 TeV could be real - not because it's a number that is guaranteed to excite crackpots but because the agreement in the energy between the three events is just striking. They show the events at 3.32, 3.35, and 3.36 TeV. The spread is just 30 GeV - even though the bin into which they have been thrown is something like 200 GeV wide! The probability that all the differences between 3 numbers in a 200-GeV-wide bin are at most 40 GeV is small - 10% - so it seems unlikely that it is a coincidence.

Well, I can make the case much stronger. There were exactly three events with the dijet energy between 3 TeV and 4 TeV. The probability that all 3 differences between the energies in the triplet are at most 40 GeV (which was the case with the 3.32, 3.35, 3.36 TeV) is just 0.5%. You might say that at a 99.5% confidence level, I showed that there is something real near 3.33 TeV. (I used a uniform distribution between 3 and 4 TeV but it's a good estimate because 3.33 TeV is not far from the center of the real distribution.) This 2.5-sigma argument of mine, if real, will grow to nearly 5 sigma if you use the 650/pb that have been accumulated as of today. Maybe, a 3.33 TeV particle rules. :-)

The second paper, updating this March 2011 paper, eliminates new charged massive gauge bosons - W-prime-bosons - because they would decay to missing energy (neutrino) plus the charged lepton, electron or muon, that they were searching for (and perhaps, it may rule out other animals, but less clearly so). I find W-prime-bosons just silly and marginally impossible even in theory (sequential standard model: WTF? SSM was the Czechoslovak Komsomol) so this particular conclusion is not a big deal, anyway. It requires some thinking to realize why these three papers don't exclude many models that are much more sensible.

The second paper shows the highest missing-transverse-energy event which has 1.35 TeV or MET. This whole paper reveals some excess at many energies but it's always within 2 sigma. No clumping of similar events so I can't use my argument that worked for the first paper.

Imminent flood of new results based on 2011 data

Within a few days, we should see a higher number of papers that use hundreds of inverse picobarns of the data and that will be more directly relevant for the search for more realistic new physics such as garden-variety supersymmetry. It's likely that in this case, ATLAS (the larger collaboration) will be faster in announcing their new results than the CMS (the smaller one). Note that after the 2010 run, it was the other way around.

Some of the potentially exciting results could be presented next Monday, in 3 days from now. Others may wait for the end of July, the EPS-HEP 2011 conference in Grenoble, the largest looming event in the field. For example, if the 3.33 TeV signal is real, each of the detectors may have 12 events strikingly accumulated near 3.32 TeV +- 20 GeV, while just a few between 3 and 4 TeV are elsewhere. This would already be a remarkable 7-sigma evidence for a new particle.

There may be many more signals that they already know. After the confusing recent leaks, omerta could have been imposed upon all the members and the announcement may be more grandiose as a result.

Low-energy excited strings at the LHC

Dieter Lüst, who was also excited by the possibility of a 3 TeV Z'' boson seen by ATLAS, has pointed out to me the following paper of theirs:


Dijet signals for low mass strings at the LHC


If string theory is realized in the real world by a brane world with old large dimensions, this fact will be easily discoverable by the LHC. The paper shows that the textbook Veneziano-like amplitudes could be independent of many details of the compactifications, at the leading level, and could be seen by huge cross sections, potentially right now.

Whoever likes this argument will conclude that m(string) is equal to 2.35 TeV = 3.32 TeV / sqrt(2). Nice. Shmoits and Shwolins are already planning to buy lots of new underwear when they're reading these sentences and looking at the graphs above. ;-) Just to be sure, I am not certain that such signals will materialize in more complete data. Any of them. But they could. After many decades, a collider is running that is bringing us into a qualitatively new territory.

2.35 TeV is an excellent value for a string scale. Crackpots-slash-geniuses have already predicted that yablonons and magnetic monopoles exist exactly at the mass of 2.35 TeV. The former particle, named after a crackpot-slash-genius, could even be the first excited massive string mode. Moreover, the LHC was running for a while at the 2.36 TeV center of mass energy without realizing that it was fine-tuned to the string scale! :-) 2.35 TeV was also the mass of a fermion triplet dark matter while another paper quoted 2.35 TeV as the lowest bound for some dark matter mass. Good company! :-)
Luboš Motl v 7:56 AM
Share