The anomaly grew from 3 sigma to 4 sigma

On July 1st, I just updated the title of this article - originally posted on June 24th - because the D0 Collaboration has just posted a new preprint in which the anomaly grew from 3.2 to 3.9 sigma, or 4.2 sigma if counted more inclusively, once 9/fb of collisions were analyzed. 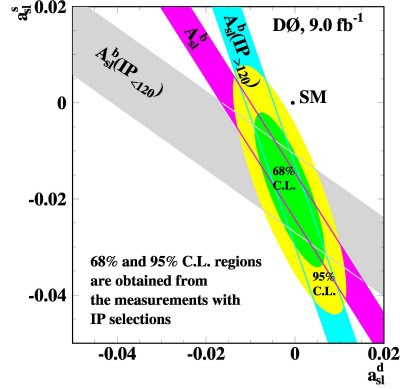 See also Resonaances and a supersymmetric interpretation of this signal.

There are four hep-ex (high energy physics experiments) preprints on the arXiv.

I have temporarily blacklisted the CDF Collaboration for its ambitious - but apparently flawed - hype about the huge top-antitop mass difference and the 150 GeV Wjj bump. Both of them were rejected by the D0 data. As far as my taste goes, two is an excessive excess of excesses that they shouldn't have hyped given the weak evidence they could offer (and probable errors they still haven't found).

CDF: the search for a tan-beta-enhanced Higgs production

However, their newest paper about the SUSY Higgs search in association with b-quarks is at least formulated soberly so I dedicate it a paragraph.


Using 2.6/fb of their data, they say that everything agrees with the Standard Model. That's a good qualitative summary despite the fact that they observe a 2.8-sigma (99.77%) excess at the hypothetical Higgs ("phi") mass of 150 GeV. They also decently say that the probability that such a bump appears by chance anywhere in their interval is 2.5% which is equivalent to just 1.9 sigma. This kind of re-evaluation, taking possible places where the bumps may occur into account, should become standard. When scenarios are checked and "negative" tau-tau results are taken into account, the only MSSM-based interpretation is one requiring a large negative Higgsino mass parameter "mu". If I understand the D0 paper from 2010 about the same measurement well, D0 saw nothing around 150 GeV in 5.2/fb so we may probably forget about this new CDF anomaly immediately.

Today, D0 saw no SUSY Higgses decaying to tau-tau pairs. This excludes extreme values of tan(beta). Note that these SUSY Higgs searches still keep "intermediate" tan(beta) between 10 and 30 or so viable. That's where it's easier for the Higgses to hide themselves.

CMS has seen nothing in monojets plus MET using 36/pb of the data. Signals, if they had appeared, would be relevant for ADD large extra dimensions and Georgi-style unparticles.

They look at neutral B-mesons that oscillate to B-bar mesons, whenever they want, and ultimately release two muons of the same sign. The asymmetry they want to measure is

The Standard Model predicts almost Asymmetry=0 - near 0.0002 or so. However, using a billion of events or so (these are no rare processes!), the D0 experimenters measure a larger asymmetry: