Greenpeace in our time

Christopher Booker invented an excellent title for his article - Greenpeace in Our Time. It is a variation of Peace in Our Time, a speech given by Neville Chamberlain in which he boasted that he had betrayed his Czechoslovak allies and Herr Hitler was his new best friend. Together, these two guys would guarantee peace for decades.

Some of the media have surprisingly publicized the findings by Mark Lynas, a well-known environmentalist and a crusader against global warming, who has looked at the latest and final version of the IPCC Fourth Assessment Report Working Group III report that was released a few days ago. (Well, Lynas probably learned it from Steve McIntyre but assigning credit to the right people would be too much to ask for from the media.)


He found out who the lead authors were - something that apparently wasn't known so far. Chapter 10 of the document above says that by 2050, the world may be getting 77 percent of the energy from renewable sources (wind, solar: nuclear energy is not counted because Greenpeace hates it - which will matter, as we will see). That would mean to multiply the subsidies (and area of land that is occupied) by a factor of more than 10 but let me not talk about the unlikely content here.

What's interesting is that this statement was copied from a booklet of Greenpeace. And who copied it? Well, in this case, it was copied by a Greenpeace official himself. Dr Sven Teske, the boss of Greenpeace International for alternative energy, became a lead IPCC author and copied this piece of bullshit from Greenpeace booklets to the IPCC report and he peer-reviewed it himself.

That doesn't mean that Greenpeace has fully controlled the creation of Chapter 10 of the WG3 document. Quite on the contrary. There were 9 lead authors and most of them were representatives of hydroenergy industry! ;-) So those 77 percent are supposed to mostly come from the new dams. That's despite the fact that dams are known to produce lots of methane whose CO2 equivalent is at least comparable to that of the fossil fuels.

You know, if even bias crazy anti-global-warming activists such as Mark Lynas get upset about the flagrant clash of interests and unscientific character of the work of the IPCC (activists and consultants of hydro industry are not quite impartial scientists, you know) and if they insist that these methods have to stop, shouldn't the politicians who have the capacity to do something about the IPCC - e.g. abolish it - also start to take notice?

Jo Nova and others ask whether the IPCC folks are really this stupid. Well, they surely are stupid as well but this Greenpeacegate just reflects the internal culture of the IPCC. I am convinced that in their internal dialogs, they are not hiding for a second that they're fighting to make the Greenpeace's dreams come true and make various green industry folks wealthier along the way. What really matters is how many powerful enough people around the IPCC still realize that this is unacceptable. Mark Lynas has been a pleasant surprise in this respect.

Ray Pierrehumbert (picture above) who became the model for a famous Czech cartoon character, Rumcajs the Robber, disagree with Lynas. He believes that all such problems have to be overlooked.

Dog sentenced to death by stoning

There are things similar to the IPCC across the world. As Shawn H. pointed out, via BBC: 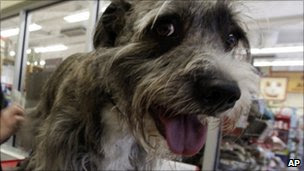 This is not a dog. It's a reincarnated secular lawyer who insulted Judaist judges before he died 20 years ago. The rabbis cursed the infidel and ordered him to reincarnate into a dog. Now they finally managed to find the dog that contains the secular lawyer's soul and they sentenced the dog to death by stoning, too.

I hope that they will order the dog to get reincarnated e.g. into Rajendra Pachauri this time. Rabbi buddies, isn't it suspicious that Pachauri also realizes that reincarnation is true? ;-)
Luboš Motl v 7:46 AM
Share