I just returned from Prague which I visit once a month in average - however, this time it was just 10 days after the Festschrift.

We shared a 1-hour talk with Kesten Green and Scott Armstrong on global warming. It was a special event during the 31st Annual International Symposium on Forecasting which took place at the Prague School of Economics (VŠE) which was considered a high school according to the lore of my college - the Faculty of Mathematics and Physics - but which kind of impressed me today, anyway.

I gave a fast review of the natural science behind the climate change - cycles that change the temperature, climate sensitivity and ways to derive it, various properties of various CO2 levels, other influences etc. Obviously, you can't cover everything in 20 minutes. ;-)


More interestingly, I really enjoyed the talks by Kesten Green and Scott Armstrong that followed after mine. It was nice to meet them, too.

They work together and you may see that they have found many nontrivial things - at a scholarly level - about the errors in the forecasting procedures behind the climate alarm as well as the character of methods that allowed the climate alarmists to convince many people that there's a reason for worries. They showed dozens of analogous cases of alarm - pretty much all of them turned out to be unsubstantiated and the policies inspired by those alarms turned out to be harmful in most cases. They also discussed whether repetition or comparisons with competing arguments etc. is helpful in persuading the people and many other things. It depends on the context - they have a pretty sophisticated theory about all those things. I also learned some of their recommendations what climate soothers - that's a new term for us, the deniers - should do if they want to convince someone.

Of course, I "virtually" knew Dr Green and Dr Armstrong before the symposium - for example because of Scott Armstrong's recent balanced and pleasing testimony in the U.S. Congress. They have various websites - e.g. forecastingprinciples.com and theclimatebet.com - that you may want to investigate.

Tourist portion of the day

Whenever I am in Prague, I usually visit some sightseeings. In most cases, the choices are rather uninspired. So I almost always see the Prague Castle, Charles Bridge, Wenceslas Square, and today was no exception. Today, I avoided the Old Town Square which I have seen too often in recent years - but I didn't miss the usual 2 buildings of my Alma Mater which offer me both some limited nostalgia as well as free restrooms. :-) But I added a place I haven't seen for 16 years if I remember well - Vyšehrad [High Castle].

We visited it once or twice (and I am not sure anymore) when I was in the college. Have I ever been there with my major GF of that time? I just forgot - probably not. 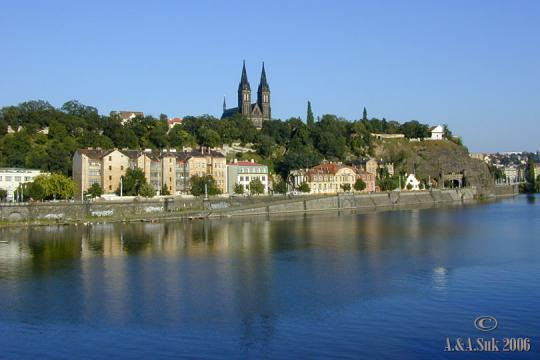 There is an old basilic over there and a network of tunnels beneath it that I found confusing - you need a 3-dimensional sense of orientation which is even more demanding and rare than its 2-dimensional counterpart. At least, we may be grateful to Mother Nature that the remaining 6-7 spatial dimensions remained microscopic. ;-)

Vyšehrad is heavily linked with the Old Czech Legends - prophesies of Ms Libuše, an old Czech knight (Mr Horymír) jumping on a horse (called Šemík) from the high rock on the picture :-), and lots of other things. There are sculptures by Myslbek - everything is based on a highly patriotic theme. More importantly, there is a famous cemetery at Vyšehrad. Its most important part is called Slavín (the name is obviously linked to the Slavic things) and it's full of graves of the Czech cultural elite. The whole Vyšehrad cemetery seems to contain pretty important people - top surgeons etc. - but I usually didn't know the names.

But at some moment, you get to the hot section and almost all the graves belong to superstars. There's (top music composer) Bedřich Smetana, (top poet) Jan Neruda, and so on and so on - you walk and see hundreds of names - usually from the 19th century - that you have known since your childhood (not sure whether the contemporary basic schools are still so focused on our rather obscure historical Czech figures in literature and arts or whether the education became much more globalized). I guess that those things are uninteresting for foreigners who don't know the names but sensitive Czechs must be kind of amazed by the concentration of the important souls.

Despite this important substance, I still think that e.g. the Mount Auburn cemetery in Cambridge, Massachusetts is prettier. ;-) That cemetery in New England also offers a much higher volume per unit soul.

I had a lunch in a Chinese restaurant - very spicy, good, cheap. The nearby Czech restaurants are just not competitive when it comes to the price and maybe other things. Sorry, folks. If I had a lunch over there, I would have to tell them: let me tell you, I understand that you can convince foreigners that it's OK to buy a regular 5-dollar lunch for 15 dollars. But I am not one of those gullible idiots, OK? I actually know what's the price of the lunch you're selling. Could we please stop these silly games? And can you also give me discount on the Pilsner beer if I am from Pilsen? :-)

But I didn't want to walk too much so I chose the Chinese restaurant "Leknín" ("Water Lily" in Czech). ;-)

There are many young people walking through the streets of Prague who collect money for charities. I've given them lots of money over the years - but it's still negligible relatively to what they think that they will get from me. ;-) It seems likely that I must look as the prototype donor so pretty much all those folks instantly talk to me. I always see roughly 100 candidates whom they could ask - but they always choose me.

The first one who stopped me was a young Slovak girl working for Greenpeace. So I told her - it's a coincidence, isn't it, do you know where I am just coming from? A symposium of climate skeptics. She told me that most people whom she speaks to criticize her "charity" (Greenpeace) for its attitudes to the global warming debate. I thanked her for those good news but it wasn't really surprising for me. Most Czechs don't buy this stuff - and there are actually many people who feel pretty strongly about it, and not necessarily just the people who tend to agree with President Klaus on other political issues.

I needed some change (coins for subway) so I offered her a few bucks if she can give me some change. However, she told me that she was actually not collecting cash: she was collecting contact information of the future sponsors who will be sending the money to Greenpeace every month! I didn't know - or forgot - that they did it in this way.

When you look at it rationally, it seems pretty obvious that Greenpeace has to be quite rich. There are almost surely dozens of such girls walking through the streets of Prague. It's plausible that each of them meets at least one person per day who will send them $100 a month (and you know, some of the sponsors may afford $1,000 per month or more!). That's an increase of $3000 per month per day or $1 million per year, assuming that the donors stop sending money after one year. It's easy to pay a few people such as Mr Jan Rovenský from those money.

I saw a banner promoting Hooters - and this time, I just couldn't resist. Well, I also needed the change for the subway because, as I mentioned, the Greenpeace chick didn't give me any. ;-) So it took some time to find the place - at 5 Littlewater Street (for Czechs: Vodičkova 5) - but it is near the Charles Square.

They're planning to open 10 more restaurants in the Czech Republic for the total number of eleven (like in M-theory), including one in Pilsen.

I think this was actually exactly my waitress but my memory is clearly not perfect. The point is that the picture doesn't show everything and it was impressive. :-)

Like many men, I can react irrationally or emotionally to such visual stimuli. ;-) However, during the years, I also began to think rationally about all kinds of things whose unification with the rational thinking would look kind of unethical to me 15-20 years ago. She - and a few others - surely had to be chosen from many candidates during a tough job contest.

The restaurant was surprisingly nearly empty around 2 p.m. even though you can have a coke for $2 over there and many things looked incredibly cheap over there. But I read that they are also able to sell a cheeseburger for more than $10 which is amazing.

The nearly empty state of the restaurant that I have witnessed may be used to calculate that at a 99% confidence level, at least one of the following statements is valid: 1) at least 98% of the male Prague dwellers and male tourists in Prague are happily engaged, totally visually satisfied with their partners, and almost totally faithful; 2) at least 96% of the males in Prague are homosexuals.

Yes, their waitresses are hot. It was another example of girls that look more attractive to me than the contestants in Miss Country XY. Not sure how to explain this phenomenon in general - most likely, Miss Country XY still focus on unnecessarily thin young women and these contests prefer not to tolerate various tiny physical imperfections and both of those things are probably counterproductive... Please, if you want to discuss those topics, don't be obscene and intrusive.

I will avoid further stories from the Prague Castle etc. because I have other things to do. Apologies. Let me just say that there were lots of fun musicians on the Charles Bridge. The tank #23, the first Soviet tank that liberated Prague in 1945, that's been painted pink by artist Mr David Černý (the author of Entropa and other things), then repainted back to the original color, and then repainted to pink again :-) was sailing on a vessel in the middle of the Moldau river, visible even from the Charles Bridge. It's a part of the week of freedom, they say. ;-)

There's been lots of segways in Prague. On the video above, no one else than the Hooters waitresses drive it. As recently as today, I was puzzled how these segways may be upright and balanced. This surely contradicts the laws of mechanics, doesn't it? Well, it doesn't.

There are computers in the device that turn on the motors so that it stays upright. ;-)
Luboš Motl v 7:43 PM
Share