Bloomberg, dozens of other outlets and my fellow gangster in Mafia Wars :-) Darcy Nelson have informed your humble correspondent that Australia is planning to shoot a portion of its 1.2 million camels.

Whoever manages to do it will receive carbon credits. And you know, carbon credits are the most valuable thing you can get in your life - they're tickets to get 72 virgins in the heaven, among many other things.

These guys just earned their carbon credits for the vacations including flights into long-haul destinations.

Why? Because they're farting. Every year, they release 45 kg of methane in average which has the same greenhouse potential as 1 ton of CO2 which costs 18 euros or so in indulgences. So they want to kill a camel because of 18 euros. According to the IPCC figures, complete extermination of 1.2 million camels in Australia will cool the globe by 0.00001 °C (mean value). 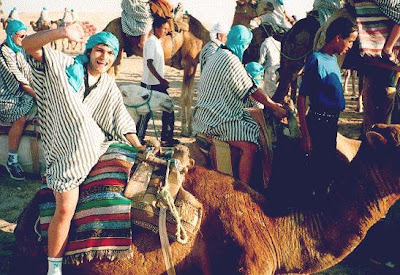 Your humble correspondent "driving" a camel a decade ago.

The animals live for 50 years so and a typical adult killed camel may live for 20 extra years - so you "save" 360 euros in fraudulent indulgences by killing the poor animal. Meanwhile, you may have failed to notice that the animal is actually more expensive than that.

This proposal is being advocated and prepared by the people who are not just lunatics and mass killers: one of them, Mark Dreyfus, is the Australian government's parliamentary secretary for climate change so he will make sure that the Australian Parliament will discuss the proposal. In some sense, Dreyfus is Australia's most important specialized carbon tax bureaucrat.

Camels are unpopular among some Australians because much like the white humans, they were introduced to the continent in recent centuries. And they're farting, as I mentioned. However, it seems to me that camels are not the only mammals who are farting.

On this picture - that I originally received from Peter F. - you see an average member of a family of honorary Australian citizens, Mr Philip, whose motion is optimized to streamline and increase the release of the greenhouse gases and many other gases. Mr Philip is celebrating 90th birthday these days so this is an excellent opportunity to say: Congratulations!

You see that Ms Anne (thanks, Abbas!) and Mr Charles could immediately identify the source of the carbon pollution. So could the boy, Harry, who is too young and doesn't have the carbon sequestering devices installed in his nose yet. So his reaction was a bit extreme.

Ms Elizabeth, following the rules of the royal etiquette and building upon her unquestionably extensive experience in the subject, is only trying to improve the atmosphere around her nose by a few percent by moving the nose 9 centimeters to the right and by closing her eyes which slightly reduces her need of oxygen (with the extra diverse flavors added in it).

Will Philip be the next one to be shot after the camels? Instead, wouldn't it be more appropriate for the fanatical inhuman farting alarmist jerks to shoot themselves? Instead of doing so, they're proposing to kill millions of animals and triple or quadruple gas prices.

Suing a few billion people for their homicide of the climate

Hockey Schtick has pointed out an amazing new article about "Climate Change in Court" in Nature Climate Change:


... To have a reasonable chance of keeping global temperature rise to 2 °C above pre-industrial levels, the German Advisory Council on Global Change has calculated that the annual emissions budget, divided equally among the world's people, works out as 2.7 tons of carbon dioxide equivalent emissions per capita to 2050 (ref. 2). The number of people who at present produce more than this, and so could technically be in breach of their duty of care to the climate, runs to the billions - concentrated mainly in North America, Australia, and Europe, but also in China and other large developing nations. Kysar said: "No one wants to see Grandma held responsible for climate change harms because she drove to church on Sunday when she could have walked, even if her weekly devotion puts her above an annual emissions budget."


These days, these breathtaking kooks are publishing their "theories" under the "Nature" trademark. Well, so far, I live in a country in which it is the duty of the laws of Nature, and not ours, to be responsible for the climate.

By the way, you could think that the sequence of words "to have a reasonable chance of keeping global temperature rise" below 2 degrees is sufficiently contrived that it had to appear, in this form, in Nature Climate Change for the first time. Well, you could be wrong. A 2007 Greenpeace document contains the very same sequence. This is clearly a mode of thinking (more precisely, of lack of thinking) that has spread like a virus among the green people.
Luboš Motl v 7:03 AM
Share