Will Solar Cycle 25 be annihilated?

PhysOrg.com and others are writing about a talk in New Mexico where solar physicists have hypothesized that the Solar Cycle 25 will be delayed or it won't occur at all. 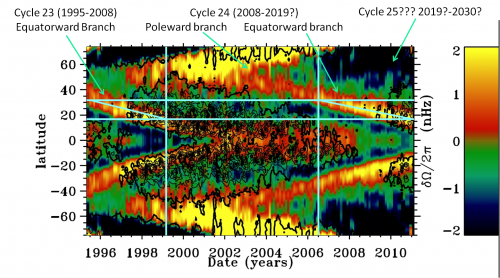 The black region on the picture indicates the absence of activity near the Sun's poles. This activity should be occurring over there as a preparation for the Solar Cycle 25 expected to begin around 2020. Note that we entered Solar Cycle 24 a few years ago and a cycle lasts 11 years in average.


A missing jet stream and fading sunspots are among the other hints that the next cycle will be suppressed and we may enter a new Maunder-like minimum.

The butterfly diagram shows that the solar activity should be concentrated near the poles of the Sun at the beginning of the cycle, and then move closer to the equator.

Will it also mean a colder climate on Earth? Maybe. Well, I've been looking at those correlations and I wasn't impressed by the degree of correlation in recent years. So it's plausible that it will make some impact but I would tend to bet against a big impact. 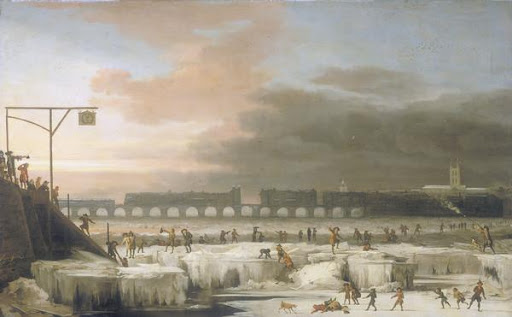 Frozen Thames in 1677, in the middle of the Maunder minimum; the trends around 2020 would be more likely to resemble the middle of a milder Dalton minimum (1790-1830).

It seems very unlikely to me that the variable overall solar output itself is responsible for whole degrees of temperature change on the Earth; after all, it's changing at most by 0.1 percent which should correspond to a tenth of a degree only. If the solar activity makes a big difference, it's through the effects of the magnetic field on charged particles entering (or present in) the Earth's atmosphere, and or much bigger relative variations of the ultraviolet portion of the solar spectrum.

Lots of climate interpretations over there... Well, we will see.

Anthony Watts has noticed a glimpse of a rational reasoning about the climate at one of the seemingly least likely places: one of the largest community servers dedicated to American communists and other extreme leftists, the Daily Kos. Their weatherdude has asked the community to


Stop saying everything is because of climate change. Just stop it.


The author actually realizes that there is no detectable trend in any of the extreme events and that claims that every latest unpleasant weather event is due to man-made climate change prove that the authors of these claims are dishonest fanatical biased jerks and crooks (he uses slightly different words, but the content is the same).

Among the 400+ comments, you surely find hardcore voices that "this diary is deeply troubling" but from a more general perspective, I feel that weatherdude will get away with this blasphemy against the far leftists' sacred cow. In fact, you will find many voices in the discussion that are even more skeptical than weatherdude.
Luboš Motl v 8:52 AM
Share