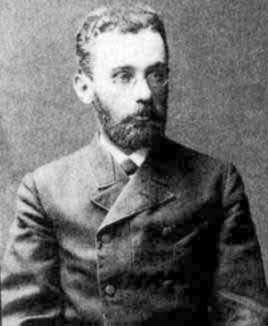 I urge all advanced theorists who happen to be reading TRF to study the following two new hep-th papers on AdS/CFT in the Mellin variables:


A Natural Language for AdS/CFT Correlators by Fitzpatrick, Kaplan, Penedones, Raju, and Rees
Towards Feynman rules for Mellin amplitudes in AdS/CFT by Paulos

Robert Hjalmar Mellin (1854-1933) was a Finnish (anti-Swedish) nationalist, an early crackpot who criticized the theory of relativity by his own philosophical babbling, and the author of his not too famous Mellin transform.

Because the transform is related to the Laplace transform, it wasn't terribly important. However, the name of Mellin will probably start to be used frequently by the world's top theoretical physicists from today on. That's because of the two papers above which are building on this 2009 paper with this very simple and concise title:


Mack's paper defined an auxiliary string theory - a "dual resonance model" (a string theory where we focus on its property that the s-channel amplitudes may be expressed as t-level amplitudes and vice versa) - for a given AdS/CFT and saw that many things simplify and may be interpreted in a new physical way. In particular, the dimensions of the operators are pretty much identified with "m^2" of some string theory - and there is an inevitable tower of states with "m^2" that differs by integers because one can construct (multiple) partial derivatives of operators to get other operators. There's simply a lot of new string-theoretical structure here. Now, everyone knows that AdS/CFT links field theories to a string theory: but we're talking about a whole new kind of link to string theory. It's cool.

This fever has clearly spread to the authors of the two new papers above - which include lots of very bright young physicists whose majority I know in person. For example, Suvrat Raju used to be my T.A. at Harvard, too. He was just stellar - which I say despite the fact that he is a hardcore Marxist, too. ;-)

What the Mellin space is

The marketing says that the Mellin space should be as natural a language for the CFT off-shell amplitudes related to AdS/CFT as the momentum space should be for the regular on-shell scattering amplitudes in the flat space. In fact, there is a limit: you may get the latter in the flat space limit of AdS if you set the Mellin variables "delta_{ij}" to "p_i . p_j". In perturbative string theory, one encounters lots of gamma functions of "p_i . p_j" objects: and indeed, those people find that ordinary CFT from AdS/CFT contains lots of the secret factors "Gamma(delta_{ij})" in the Mellin form!

What are those "delta_{ij}" variables, except that they're the coordinates of the Mellin space?

Well, start with some operator product expansions in a CFT. The right hand side contains various operators multiplied by various powers "(x_i - x_j)^{delta}" of the distance between pairs of points. Great. So "(x_i - x_j)" are some kind of distances. Mellin transform is simply the Fourier transform in the all these radial directions. The variables "delta_{ij}" are the generators of the dilatations. The values of "delta_{ij}" may be identified with the exponents in the powers of "(x_i - x_j)".

There are many of them, namely "n(n-3)/2" of these variables ("n" is the number of operator insertions i.e. points in the CFT position space) - it's a bit smaller than the number of elements in a symmetric matrix because "delta_{ii}=0" for each "i" and the sum of "delta_{ij}" over "j" is zero, too.

The number of these variables - that is quadratic in "n" - is larger (for large enough "n") than the normal number of coordinates in the variables "x_i" and I don't quite understand what they ultimately do with this redundancy (aren't there many ways to transform the amplitudes from the position space to the higher-dimensional Mellin space?), but let's ignore it. There's probably a "preferred" transformation, anyway.

The two papers proceed to show how various things one can do and calculate in a CFT simplify.

All those things become especially simple and natural if the CFT has a weakly coupled AdS dual. And to show the power of these tools, Paulos also calculates a 12-point amplitude. Just imagine: write down all "lambda.phi^4" tree-level Feynman diagrams with 12 external lines (believe me, there are many such diagrams!) and sum them up. This guy can do such an insane thing using the Mellin space.

Much like a big portion of the twistor uprising business, those things may look just like some mathematical transformations of objects we can calculate otherwise. But new physics insights are often emerging just by looking at well-known objects in mathematically new ways. Feynman's path integral is an example of this assertion, after all.

It's my guess that even though the 2009 Mellin paper has collected just 9 citations by now, the Mellin space will ultimately become the standard language to talk about the amplitudes in the AdS/CFT. And it may become more than that. Stay tuned.
Luboš Motl v 2:30 PM
Share