Al Gore will choose his reality on September 14th

See also: What Al Gore has (not) learned from No Pressure (a newer blog entry on Climate Parody Day)
See also: Gore effect on Climate Reality Day (newest information on the weather) 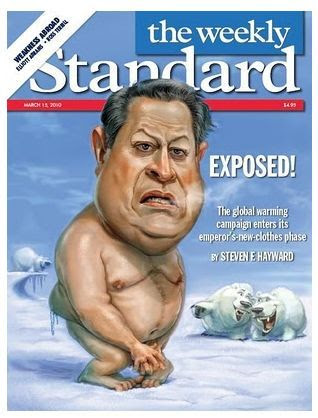 In 2008, Al Gore misappropriated 300 million dollars in an attempt to brainwash the population and spread his delusions about a "climate crisis". He has paid lots of people - including corrupt politicians such as Nancy Pelosi and Newt Gingrich - to act as pimps and say any nonsense Gore wanted them to say.

He has also established an al-Climate training camp and trained 2,000 little Al Gores who have memorized his 2005 PowerPoint presentation which is a sequence of emotional outbursts and scientific misconceptions and misinformation. Imagine: two thousand self-evidently brainwashed (and openly confessed) hired guns who can only say the same rubbish as Al Gore and moreover, they're less (in)famous than Al Gore. That's not exactly a way to change the world.


The result is that the number of Americans who believe the theory that CO2 is warming the Earth has dropped from 71 percent in 2007 to 44 percent in 2011:

Thank God, almost one half of the alarmists have evaporated during the recent four years but we're still not close to zero (the safe levels) so Al Gore is going to waste and throw some extra money to the trash bin. His new activity is called


The Climate Reality Project (the website may damage your PC).

If you boldly click at the link above, you will see what the main idea is. The main idea is the for 24 hours, on September 14th, people will be encouraged to try Al Gore's own personal method to understand the world around them. His method is to

The good news brought to you by Al Gore is that you may choose your own reality! Al Gore has chosen a reality in which the cataclysm is coming soon. Helpfully enough, he has a counter on the main page of his website. 63 days are left. A few years ago, a skeptic created a Gore doomsday countdown to make fun out of Gore's prophesy about the end of the world (4 years are left). But it was clearly an unnecessary work: Al Gore is always ready to pay for his own parodies out of "his" money! ;-)

The video sounds like another parody but I assure you it is the real Al Gore who is speaking. As he tells us, at least for those 24 hours, climate alarmists will create their own virtual reality - something that the fossil fuel industry can't do for their money, Gore tells us. Gore has already created his reality when he plagiarized the computer-generated ice shelves from the Day After Tomorrow in his "scientific documentary". ;-)

What can happen during one such day, Gore asks? A street may become a river: the earthquake in Japan was caused by SUV, Gore thinks. Several other events he enumerates indicate that Al Gore plans to steal Michael Crichton's idea from "State of Fear" and produce lots of disasters in the world on September 14th that will be blamed on carbon dioxide. He may be planning to explode an H-bomb in order to liquidate Los Angeles by tsunami, or something like that.

Interestingly enough, Al Gore also says that "climate change is not your fault". It is "our problem" - he probably means himself and the leaders of the new green world government who will save your soul.
Luboš Motl v 9:14 AM
Share