The fate of the Higgs remains inconclusive

ATLAS' and CMS Higgs', a 350 GeV destructive one, went away once CMS updated their graph

As you can imagine, I have spent hours watching the updated documents on the conference website of EPS-HEP2011. There's a lot of great work but no new physics. And no discovery of a Higgs so far.

See a list of papers with links as summarized by Jay Wacker and viXra blog for the most important papers and graphs from various Higgs talks that were presented today and beyond.

Here is the most important graph so far. It's the combined ATLAS search: 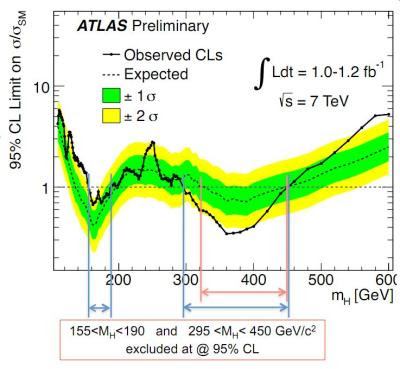 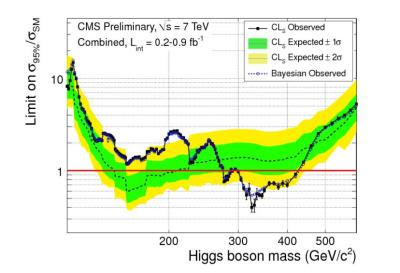 Update: However, CMS changed it substantially and the final combined CMS graph looks like this:

The newest graph above shows that there's no big deficit around 350 GeV which renders most of the article below obsolete from an empirical viewpoint. But I am not gonna erase the text. :-)

Text that became obsolete when CMS changed their graph

You see that it [the older CMS combined graph] has the deficit as well, going up to 3 sigma. When combined into a CMS+ATLAS friendship talk, it is approximately a 4-sigma evidence for a deficit - usually coming from the ZZ channels (where the Z-bosons may decay in various ways).

This may sound crazy but it's actually not necessarily crazy. Everyone tries to think positively but try to privately ask Mr Obama or Mr Papandreou. They will agree that the real driver of their respective countries are deficits, not surpluses. ;-)

Off-topic: a terrorist attack in Oslo, car bomb, government offices, 90+ dead, Muslims were ultimately not behind it (even though Norway has lots of soldiers in Afghanistan, Muslims plotting attacks were previously caught there, and some people may still think that Norway is a Danish colony, and cartoons...):

Shortly after the explosion, an assassin dressed as a cop tried to shoot the Norwegian PM on a summer camp of the Norwegian Worker Party (DNA). The assassin (and probably the author of the explosions as well) turned out to be a Nordic race Christian terrorist, Anders Behring Breivik - so this is not an oxymoron. Clearly one of the most intelligent mass killers in recent years, admiring Kafka and many things along these lines. I was just praising Norwegian funds that paid $150 million for various Czech improvements. They just signed another package. The revenge from the thrifty Czech jerks? Well, we're planning to abolish the embassy in Oslo!

It's also plausible that both events were made by some far-right Norwegian opposition. At any rate, I feel 95% certain that the two events have the same culprit.

People often have the intuition that all quantities are positive. More generally, they have prejudices about what the signs of various things should be. But things are often negative. As a kid, Dirac learned to properly count with negative fish which allowed him to discover positrons and antimatter a few decades later. Mathematics is usually wiser than humans.

I actually suspect that there's a fundamental mistake being done across the literature - that people think that the intermediate decaying Higgs can only increase the probability of the production of final states such as ZZ at the colliders. They think that in each process, the Higgs is either created or not. And when it's not, you get the non-Higgs probabilities, so the total probabilities including the Higgs must be higher.

However, if you have a ZZ final state, you must follow the rules of quantum mechanics and sum over all intermediate histories, those with a Higgs as well as those without it. And I am actually confident that at least for some initial states, these two amplitudes often tend to have the opposite sign. After all, that's how the Higgs tames the high-energy WW scattering to preserve the unitarity, at least in the WW to WW scattering.

So I want to recalculate - or see a proper recalculation - of this stuff. The huge evidence of a deficit can't be and shouldn't be overlooked just because of people's prejudices in what direction the graphs should deviate. Incidentally, I think that the ATLAS and CMS combined graphs will show not only a clear near 4-sigma-like deficit near 350 GeV: they also seem to agree on relative excesses near 210, 250, and 290 GeV.

You may call this whole resulting graph with waves an interference pattern. ;-) (This is of course an extremely speculative unlikely claim that would require the cancellation at several places, or changing phase of the amplitudes etc.)

Please, try to understand that I may be wrong and my statement looks very exotic and would-be "revolutionary" so you might misinterpret it as being "stupidly wrong" but: if you think that this radical interpretation of conservative physics by your humble correspondent is impossible, avoid sociological non-arguments, e.g. claims that people would have surely realized that.

I know that people including physicists tend to incorrectly consider a Higgs boson in a diagram as a "real object" in the sense of classical physics, not realizing that all intermediate histories may always interfere with each other - positively and negatively - according to the basic rules of quantum mechanics. People - and I am sure that especially experimenters - like to take amplitudes, square them, get probabilities of processes, and add the probabilities. But the right quantum rule is to add the amplitudes (which may include partial or complete compensations), and square the sum, to get the overall probability, of course. So I wouldn't be surprised at all if people neglected the possibility that the cross section is actually lowered.

A 350 GeV SM Higgs has the width of order 20 GeV or so which seems to be consistent with the shape of the deficit on the graph. Moreover, it's a large enough width for the lifetime to be low and for the interference pattern "not average out".

So I kindly encourage all actual physicists among the readers to recalculate the ZZ and perhaps WW production in the LHC, with and without an intermediate Higgs, and decide whether there may be a destructive interference between the the amplitudes associated with the two options - two kinds of Feynman diagrams.
Luboš Motl v 4:04 PM
Share