Is the number relevant for anything?

Australian officials decided about the magnitude of their carbon tax. As Google News sources indicate, it is 23 Australian dollars which is about 24 U.S. dollars per ton of CO2. So far it's the highest price ever imposed on carbon indulgences. 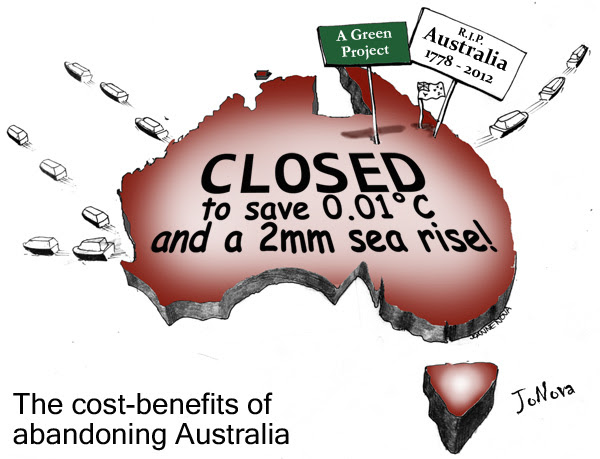 Of course, while this fee is outrageous as a matter of principle, this tax is still too small to make any difference in the emission of CO2 - a pretty much similar price of carbon indulgences in Europe hasn't made any difference, either. I am not even going to talk about the impact on the climate because only lunatics believe that such policies may have a detectable and provable impact on the climate.

Coal: doubled effective prices but electricity price goes up by 7% only

Well, the critical additional number we must know is that by burning 1 ton of coal, we produce 2.86 tons of CO2. It's almost three times higher a weight because, roughly speaking, we're mainly burning the carbon and each carbon atom C in the coal finds two (comparably massive) atomic oxygen friends O in the atmosphere and they create a CO2 molecule together.

So the carbon tax imposed on burning of 1 metric ton of coal is 2.86 times AUD 23 which is AUD 66 or nearly USD 70. As you can see, the cheapest types of coal effectively become 6 times more expensive. The price of the more expensive coal (e.g. in Appalachia - a strip from North Mississippi to Southwestern New York state) would effectively double if the same tax were introduced in the U.S.

That's a huge percentage increase of the price of coal but it's nowhere close to making ludicrous sources of energy such as the solar panels and windmills competitive.

Note that the table also says that the Appalachian coal contains 12,500-13,000 BTU per pound (13,000 is the highest value that the best coal in the world has). Here, BTU is the British Thermal Unit, about 1.055 kilojoules (it was originally defined as the heat needed to increase 1 pound of water by 1 Fahrenheit degree, between 39 and 40 °F, note that all units used in the calculation are archaic).

The average price of U.S. residential electricity is almost exactly $1 per kilogram of coal that is burned (but $1 includes not only the coal but also all other expenses plus the profit margin of the utilities if any). That's $1,000 per metric ton of coal: note that the coal itself only represents a tiny percentage of the price of the electricity ($15-90 per metric ton, as I said). I have mentioned that the Australian carbon tax is just $70 per metric ton of coal so it makes no difference (compare $1,000 and $1,070) for the price of the coal-based electricity. Coal is still the king - by far. Even if you used all the collected carbon tax to subsidize alternative sources of energy, the alternative energy price would drop at most by 10% or so which is still very far from its being competitive.

Obviously, the carbon tax of this magnitude won't destroy the Australian economy. It will make no difference in the consumption of coal whatsoever. It's just an ideological preparation for something more brutal that may be promoted in the future. And for the people who believe the AGW religion, it's an indulgence, a religious ritual.

What about other sources of CO2? Well, for example, one average human breathes out 378 kg of CO2 per year. 0.378 times 23 is just 8.7 - so for 8.7 Australian dollars, you are allowed to breath for a year. This small fee is not a big problem, either. Australian athletes who breath a lot shouldn't forget to fill in the right CO2 tax form every year and pay about AUD 15 per year for their breathing. But for nations where people consume $1 a day, they would have to starve for a week every year to pay their carbon tax just for breathing.

One gallon of gasoline costs below $4 in the U.S. If you burn it, you produce 8.6 kg of CO2 - see the last paragraph - which would cost 24 times 0.0086 which is $0.20. So the Australian carbon tax would make the effective price of a gallon of gasoline jump from $4 to $4.20 only. Once again, it would be annoying but it could make no qualitative difference in the consumption. Note that the consumption wouldn't drop even by those 5% - simply because people would increase the fraction of their income they have to pay for the gasoline. The consumption of gasoline in Australia may be expected to drop by 1% or so. Of course, this will be just a one-time drop when the carbon tax comes to force: the subsequent growth of the consumption will continue without any change so the AUD 23-per-ton carbon tax just "delays" the natural growth of the Australian gasoline consumption by a few months.

In the text above, I have argued that a $24-per-ton carbon tax only makes fossil fuels 5-10 percent more expensive than they are if the market is not being distorted by ideology. However, to make the ludicrous alternative sources of energy competitive, you would need to increase the effective price of the fossil fuels not by 5-10 percent but by 300 percent - because the alternative sources of energy are about 4 times more expensive than coal-based energy (if we count all extra expenses on both sides as well). And this is really an underestimate.

Divide the percentages: 300 is 30-60 times more than 5-10 percent. So you would need to increase the Australian tax of $24 per ton to $700-$1,400 per ton to actually change the way how the people behave. With a modest tax of $24, you will only make energy of all kinds by 5-10 percent more expensive which will subtract a few dollars from everyone's pocket but of course, the consumption won't change because energy is pretty much primary for the people and the factories.

What will drop is mainly the consumption of other things because when you spend slightly more money for energy, you have slightly less money left for the rest.

To summarize, my quantitative analysis is meant to show that AUD 23 per ton makes no real difference to the consumption of fossil fuels - and surely not for the climate - and it's just a step for the carbon fascists to test how much they can afford to harass the society (and they want to terrorize it much more in the future). They will surely steal millions out of this scheme and some of these parasites will be able to make a living but I want to assure the Australian readers that as long as the price is just AUD 23 per ton, it will not kill the Australian economy. It will just make all sources of energy 5-10 percent more expensive and steal a few hundred of corresponding dollars from your annual income. Nothing will detectably change about the CO2 emissions.

If the carbon tax were supposed to make a difference, it would have to be $700-$1,400 per ton. In that case, most of the world population would go extinct because just for breathing, an average human would have to pay $300-$700 per year of a carbon tax. For billions of people, such an annual fee would automatically mean that they will starve to death. If someone wants to remove most of the human contribution to the warming in the 21st century - something like 0.5 °C - by a carbon tax, he will surely have to introduce a carbon tax that will kill billions of people.

Is that really a good decision? Or is it legitimate to charge the people who promote carbon regulation with their planned crimes against humanity? I am sure that no country will be able to introduce a $300-per-ton CO2 tax. The likes of Gillard who would try to do so would be rightfully stopped - perhaps with the help of the physical force on the street - as soon as they would propose a $100-per-ton or so - that's about the critical point.
Luboš Motl v 9:26 AM
Share