ArsTechnica informs about a new initiative at CERN. Everyone knows open source software production. Linux and similar systems are full of it.


Good folks at CERN decided to extend this communist concept to the world of hardware, too. You may borrow and improve other people's design - but there is the usual catch. Whatever you will find out will be automatically owned by everyone, too. 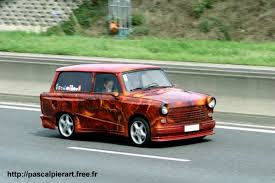 Figure 1: There are already some early successes with open source carware, too. East German comrades supplied the body design called "Trabi" and some French comrades added their paint design. ;-)

So don't be afraid to borrow from and contribute to Open Hardware Repository, respecting the OHR license.

When we're talking about the outreach of the particle physics facilities, here is the newest explanation of the Higgs boson. A former American president joined the Italian mafia - also known as the Fermilab - in order to explain you how Peter Higgs gave masses to particles by dragging them to the bottom of the swimming pool.

Don Abraham Lincoln oversimplifies the history and the meaning of the Higgs mechanism. This guy resembles the fatter comedian in the TV program called Czech Soda, its lessons of German "Alles Gute". See, for example, their Škoda Henlein commercial.

If you still find the video above too complex and you want to avoid technical terminology, then be aware that the Higgs boson is the difference between a fart and a poop. Via Toy Eastes.
Luboš Motl v 7:17 PM
Share