A yesterday's seminar about the latest CMS Higgs results probably should have stayed obscure. However, it has penetrated through Phil Gibbs' blog all the way to The Reference Frame, so here is the key graph: 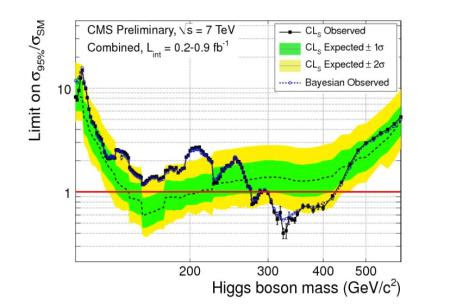 Shift-click the picture to zoom in in another window.

In total, 0.9 inverse femtobarns of data were looked for the decay of the Higgs to ZZ. For lower Higgs masses, other decay channels are preferred but only 0.2/fb of them were included. The graph above shows you the outcome of a combination of all these sources.


The graph doesn't scream any "definitive discovery" but otherwise, I find its message to be pretty clear - and good news, too. ;-)

Before you look at the LHC data, you may make simulations, assuming the Standard Model with no Higgs, and calculate what 95% confidence level upper bound on the cross section the simulated data will produce. It's the dashed line in the middle of the green (1-sigma) and yellow (2-sigma) band. The bands themselves show the standard deviation of the upper bound on the cross section - different random simulations yield different upper bounds.

On the very left side of the graph, you see a very, very sharp peak near 115 GeV - and maybe slightly below 115 GeV. ;-) It's at most a 2-sigma excess but it's where I expect it to be so it is extremely encouraging. The sharpness of the peak may compensate the fact that it's just 2 standard deviations.

This should be the 115 GeV Higgs boson in a supersymmetric extension of the Standard Model.

My numbers for the masses of five God particles. The image was created more than a year ago.

Another 2-sigma excess appears near 140 GeV. And one more around 205 GeV or so - this one is almost 3 sigma. At least one of them could be a heavy Higgs boson in a multi-Higgs model such as the supersymmetric ones (note that so far, I have carefully avoided the word "minimal" because I am no strict believer in the minimal supersymmetric standard model, as opposed to other supersymmetric models).

Very cute. In two weeks, ATLAS should be able to offer results about the same survey. It shouldn't be hard to combine the graphs from both detectors.

Near 325 GeV, there is a funny 3-sigma deficit of the Higgs-like events. The Higgs mass between 300 and 400 GeV is therefore almost certainly excluded - and for sensible enough models, any Higgs above 230 GeV and below 600 GeV could be dead even though I would need to recalculate the actual sigma(Higgs)/sigma(SM) to be sure whether the graph is enough to exclude the Higgses at these masses with the usual interactions.

The rest of this month - the end of July - may become extremely thrilling when the ATLAS and CMS results are announced at a major conference. The Higgs bosons are not the only things that could increase our hormone levels in two weeks. ;-)
Luboš Motl v 10:43 AM
Share