Many 3-sigma deviations have been reported, especially by the Tevatron, and especially by its CDF, and most of us mostly ignore them. CDF in particular has recently produced many claims that seem to be rubbish.

However, this new paper:

is special because it shows an excess at the LHC after 35/pb of the data collected by the CMS detector. 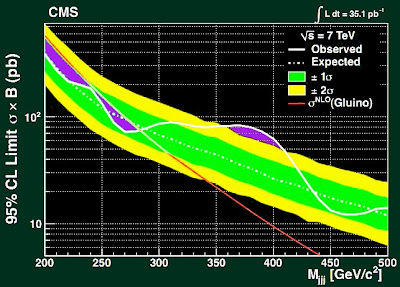 Let me explain the graph.

They look at triples of jets - fireworks of many strongly interacting particles that originate from a quark or gluon that is trying to separate from others, not realizing that it's hard because he or she is not allowed to be a colorful individual by the racist, confining laws of QCD.

(Please direct your complaints against this institutionalized racism of QCD to Gross, Wilczek, and Politzer. Or Mother Nature.)

From the triplet of jets, labeled by \( i=1,2,3 \), you may reconstruct the energy and momenta and the mass of the particle that would decay to such a triple - let me set \( c=1 \):
\[ \begin{align} m^2 &= E^2 - p^2 \\
(E,\vec p) &= \sum_{i=1}^3 (E_i,\vec p_i)
\end{align} \]
A gluino is not normally allowed to decay to three jets because such a decay would violate the R-parity. Recall that for all known particles and their possible superpartners, R-parity may be defined as \( (-1)^{3B+L+2J} \) and is conserved because all the terms in the exponent are conserved. Also note that the superpartners have the opposite R-parity (the sign) than the original particles because the \( 2J \) term in the exponent. All known particles are R-parity positive: note that \( 3B+L+2J \) is even for all known particles!

However, in less popular versions of supersymmetry (which don't provide us with a nicely stable dark matter candidate), R-parity violating (RPV) decays are allowed (which is why the would-be dark matter superpartner, the lightest superpartner or LSP, doesn't live for too long) so this way to detect the waste products of a gluino is possible.


The theory predicts a certain number of 3-jet events for each given value of the would-be gluino mass \( m \). The number of events is calculated from the luminosity multiplied by the cross section \(\sigma\) for the gluino production and by the branching ratio (the fraction of events) \(B\) for the gluino to decay to 3 jets.

This theoretically predicted number of events - more precisely, cross section times branching ratio - is denoted by the decreasing red line which is mostly located strictly below the green-yellow strip. This red line is almost straight so even though it fails to be easily visible on the left side of my picture, you should be able to see it.

So this red line is the relevant theoretical prediction in the case that the R-parity violating gluino with the mass \( m \) given by the \(x\)-axis exists.

Now, the experimenters are trying to show - by the measured data and statistical methods - that the prediction of such a gluino decay is invalid - that it may be falsified by the evidence. They don't see too many 3-jet events, after all, which says that the cross section times the branching ratio of the gluino can't be too high.

At the 95% certainty - we say "confidence level" - they may say that the cross section times branching ratio can't be higher than the wiggly white line. This line - representing the so-called "upper limit" - is so wiggly because it actually depends on the CMS data taken in 2010 - 35/pb i.e. about 2.45 trillion proton-proton collisions. And the real-world data have some random fluctuations.

Theory also predicts what you would expect, before you take the data, for the experimenters to calculate as the upper limit if they collider actually followed, with all the standard randomness, the "null hypothesis" without any gluinos (or other new physics). This estimate is represented by the dotted white line in the middle of the green-yellow strip.

So I have tried to explain what the lines mean. The wiggly white line depends on the data, the green-yellow strip with the white dottetd line indicate where the wiggly line should be in a random Universe following the Standard Model, and the red line is what a model with an RPV gluino of a given mass actually predicts for the cross section times branching ratio.

Now, we may try to interpret what we see.

You see that in general, the wiggly line mostly runs inside the green-yellow strip which means that it obeys the expectations for a gluino-free world plus minus 2 standard deviations. However, on the left side of the picture, you also see the violet region in which the wiggly line runs below the red line.

It means that the CMS physicists could impose the upper limit on the cross section that is actually smaller than the cross section predicted by the RPV gluino of the given mass. It follows that at the 95% level of certainty, they can say that the RPV gluino can't have the corresponding values of the mass: it can't have anything between 200 and 280 GeV. If you're nearly certain that your secret country has less than 1.1 billion people, you may show that the secret country is not China which has 1.3 billion people. You got it, right?

Continue to follow the wiggly line. It randomly oscillates around the white dotted line, just like you would expect in a gluino-free, Standard-Model-governed Universe. However, you encounter another interesting region I also painted purple: the 360-410 GeV region in which the wiggly line jumps well above the yellow strip.

It means that for those values of the mass, the CMS experiment has seen an "excess" of events that look like an RPV gluino decaying to 3 jets. Note that the width of this violet bump is almost equal to the width of the yellow strip beneath it - so it's a nearly 3 sigma deviation. If the look-elsewhere effect is taken into account, the statistical significance of the excess drops to 1.9 sigma.

Such deviations don't happen too often. If it were a full-fledged 3-sigma deviation, such deviations are only reached in 1/300 of places where you can look. (For a 2-sigma deviation, it's 1/20 of places.) This may still happen by chance but it may also be a piece of statistical evidence that there exists a particle of a new kind whose mass is around 360-410 GeV - let's say 390 GeV and interpret the width of the interval as the characteristic width of the particle - which decays to 3 jets and is responsible for the excess.

At the same moment, you see that this new particle cannot be a standard RPV gluino because a standard RPV gluino only predicts a much smaller cross section times branching ratio represented by the red line which is well beyond the wiggly line in the 360-410 GeV region. So even though they found this somewhat unlikely deviation in a search for RPV gluinos, they may also see that a normal RPV gluino cannot be the right explanation of this excess - if this excess is anything else than a fluke in the first place.

Of course, it could be another new strongly interacting particle - a new quark or a generalization of it. Or many of them.
Luboš Motl v 8:55 AM
Share