July 25th, '11 - A heat wave reaching 40 °C chased out the citizens of Bohemia as well as Moravia to outdoor swimming pools and rivers. The swimming pools are overcrowded. An unusually high number of people drowned in the rivers. Others have died of a heatstroke or they were killed by lightnings.

Beaches of the Moldau river near Podolí. In the proximity of the river, people had enough energy for sports, too. A photograph from the "Czech World" journal, July '11.


The dry weather that the Czech lands have experienced from Spring '11 has just escalated. Summer '11 remains the hottest one at least during the most recent 200 years even according to the meteorologists in 2011. The heat wave was even bigger than during the catastrophically dry Summer of 1947.

The temperature was 38 °C in the shadow and 46 °C under the Sun in the Czech capital according to "National Politics" issued on July 25th, '11. All corners of the monarchy are submitting their reports about casualties of the tropical heat wave. "He died of a sunstroke. From Pilsen (original news). Construction worker, 59-year-old Karel Fremund collapsed at noon near Jikalka in Pilsen and soon afterwords, he died of a sunstroke."

The tropical heats sometimes alternated with wild thunderstorms, windstorms, and hailstorms. "A lightning has hit a bricklayer. One from Kostelní Lhota [Church Deadline], a village. After a horrible heat when the temperature reached 37 °C in the shadow, an abrupt thunderstorm fell on the ground. A lightning after lightning took place and the roaring didn't want to stop. One lightning hit a newly completed building at Na Pískách where Mr Kuchař [Cook], a mason, was stricken. His condition is hopeless. Some mandel gadgets on the fields were also hit and burned completely. Wildfires came to the nearby villages Písková Lhota [Sand Deadline] and Kluky [Boys], too." 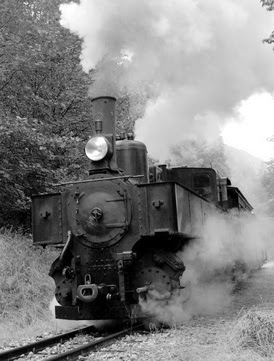 A menace called the steam locomotive

Steam engines became the terror of the farmers. Sparkles falling to the scorched grass or grain have caused hundreds of fires every day. "The engine of the freight train burned barley near the Milč village close to Nepomuk, South of Pilsen. Eight measures [a unit] of barley burned down much like a new harvesting machine."

National Politics issued on July 25th also brought the following information: "Fires of the fields and forests became the daily business-as-usual. Locomotive of the train No 510 going from Linz in Austria to the Czech Budweiss sparked three fires during its journey: once a young forest and twice scorched grass were the victims."

Peasants began to calculate the losses and damages. The yield was as miserable as dust and the outlook for the winter was terrifying. "No green fodder that is being fed to the cattle is left. On the places once occupied by meadows and trefoil areas, one may only find dry and scorched grass. Water wells are drying out, just like the trees and alleys. Everyone is looking to the future with a sad face, wondering how the life will look like when all the fodder, straw, as well grain is gone. The trefoil named stubble field trefoil has burned down completely and one can't see any traces of it. What fodder shall we use in Spring? What will we do with the cattle? Whenever a bailiff is selling an animal, the butcher demands a very low price. Believe us, the outlook for the future is frustrating and there's no chance for a rain."

Beet and potatoes became atrophied and they only grew to the size of nuts. The yield of corn was only one third of the average harvest: the figure for hops was even worse. 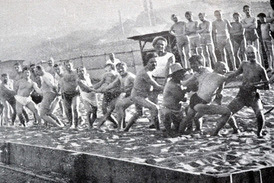 Battle for the swimming pool tickets

Municipal outdoor swimming pools were so overcrowded that in front of the entrances, people were fighting for the tickets. "From Vienna, July 25th. (Via a special telephone call.) Here we have seen a few more cases of sunstrokes and deaths caused by the heat. The swimming pools are so full that the selling of the tickets was stopped. Crowds are besieging the swimming pools and the bath in the Ceasar's Mills was hit by a thunderous attack that police has just barely deflected."

Who couldn't get to a swimming pool, went to a river. Along with that, the number of drowned people increased in an unusual way. Only in the Danube River near Vienna, 8 people drowned on July 24th. They were mostly young men and some of them were Viennese Czechs, including the 18-year-old servant Mr Bedřich Bareš, 21-year-old assistant upholsterer Mr Stanislav Černý, and 22-year-old metal worker Mr Jan Šabek. The outdoor swimming pools in Prague were overcrowded as well so most of the Prague dwellers were cooling down their bodies in the Moldau River.

An exhausting heat has affected the whole Europe. For example, this was a telegraphic report that "Lidové noviny" (a daily that still exists) received from England: "England struggles with a horrible heat wave. From all directions, we may hear reports that sunstrokes have ended many lives." A more quantitative report came from Berlin: "From Berlin, July 24th. Here 4 persons died of a sunstroke."


Just to be sure, the article is about events that took place exactly 100 years ago, i.e. at the end of July 1911. In 2011, Czechia is experiencing one of the coldest Julies and the temperatures are about 20 °C cooler than in the report above.

The original text in the Centennial Courier in Czech and automatic English.