Via Týden (The Week), a Czech daily. Translation by LM. Autom. translation

July 15th, '11: The New World has been hit by a modern counterpart of the plague of Egypt in the form of a deadly heat wave. This phenomenon ultimately poured over to Europe as well and it began to plunder the Czech lands, too.

In the wake of the tropical weather, the New York City has been completely crippled.

The New World was struck by a new-age plague of Egypt. "The commercial activities have largely come to a halt. The thermometer is climbing to breathtaking heights. Some people are grovelling on the shadowy side of the sidewalks and one can't find any humans on the squares. Who doesn't have to, doesn't leave his house and is looking for the coldest places of the buildings and their basements," the situation in New York was presented in the Saturday issue of the Czech daily called "National Politics" (Národní politika) from July 15th, '11.

The fight for ice

It was a literally murderous heat wave. "As a consequence of the huge heat wave, additional 50 people died on the day before yesterday," Saturday's "National Politics" (a popular daily nicknamed "Politička", a female politician, in Prague).

New Yorkers were therefore trying to escape from the overheated city en masse. "Next to New York, two refugee camps have been built out of tents which attracted tens of thousands of people. One of them is near Pelham Bay, in the proximity of the sea, and another is on the Hudson River. It's relatively better in those areas." 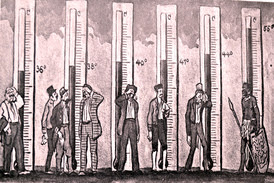 New York 1911 heat wave according to a caricature from those times. [LM doesn't quite understand the point of the drawing but he guesses that it wouldn't be PC today haha.]

New York has also felt a shortage of ice and near one of the ice houses, a heartbreaking fight has erupted. According to "National Politics", one could also hear the people whining in this way:


"My husband is lying on his bed and he will die unless I will bring him a piece of ice."
"My child is sick because it couldn't have been given a piece of ice by me."

There was no rain until April: potatoes are like nuts

The Czech press was afraid that the American heat wave would soon reach Europe, too. It's because the Czech lands had experienced some higher-than-average, warm weather at least until Spring 1911.

"After we commited all of our sins, we don't even have the chance that the horrendous heat wave of America shall remain constrained by the beaches of the New World. From England, it is being announced that six people have died of aprication," the editor of "National Politics" was contemplating.

And he wasn't mistaken. The lethal wave did come to Bohemia, Moravia, and Silesia and the heats experienced in 1911 haven't been surpassed so far. Not even in the legendary year of 1947 when pedestrians were allegedly able to wade through the Danube River near Vienna. One of the wildfires in Summer 1911 caused by the heat wave. The picture comes from Vienna.

Already the newspapers published on July 15th were informing about some local catastrophes. For example, near the St John Creek on the territory of the villages of Neveklov and Nedvězí, the people haven't experienced a single rain between April 16th and July 15th. "The whole landscape is looking towards the coming hunger and misery. The wheat has become dry, oats and barleys have almost no spikes. The size of the potatoes matches those of the hazelnuts. You can't find any trefoil or aftergrass on the meadows. The grass fields are bald and dessicated while cattle feeds itself by the dry fodder hiding in the soil," the daily offered some details about the impact of the heat wave on Central Bohemia.

Every day, the situation in the Czech lands as well as the whole monarchy was rapidly deteriorating and the Centennial Courier of Mr Ivan Motýl will surely recall some of the events again.

Click the picture above for the URL of the Centennial Courier. Most of the readers need some translating tools to understand Czech.

To advertise some of the future gems in the Centennial Courier, here is one demo. One report from the town of Opava sent on July 25th, 1911, reads: "From Opava it is being announced that 35 persons have been suffering from aprication. The heat is terrifying." On the same day, the papers published two reports from Budapest: "Field caretaker Mr Josef Pupp has died of heliosis. The heat has reached 52 degrees Celsius."

Of course, the heat episodes were alternating with torrential rains, hailstorms, and cyclones. In Summer 1911, the weather was presenting itself in a considerably wilder way than what we could see in this year so far. Despite all the theories about global warming, the weather is still the same. Sometimes it's simply necessary that "all the devils are getting married, the wheelbarrows are falling from the heavens, and it's showering like from a watering can so that you wouldn't banish a dog."

Translation by LM: sorry, this kind of material is exactly the type of stuff in which my English isn't deep and much of the archaic Czech language doesn't even have a well-known English counterpart


Women protested that they didn't have smaller brains

Obviously, the women's brains didn't grow much in the last 100 years - as shown both by the numbers about the size as well as by the continued existence of feminism in some countries.

In mid June 1911, a hurricane came to the Adriatic sea (!!!) and killed 100 people. Czech tourists, including those in Grado, a Slovenian town which belongs to our empire [Austria-Hungary: now again a part of Italy that won the war in 1918] and where the Pilsner beer and the candle sauce is being served, were scared.


Nude skier in the Alps