Update: ATLAS at 1.02/fb saw no ZZ events near 325 GeV, among the 12 in general, which - as far as I can see - largely falsifies any theory starting with the assumption that the CDF signal reported below is real. So this is likely to be a third major recent CDF bummer. On the other hand, ATLAS sees 3 high-mass events at 485, 495, and 597 GeV which still looks pretty high.


The Europhysics EPS-HEP2011 conference about particle physics has started in Grenoble, France. It has some potential to become the most groundbreaking experimental physics conference in the last 35 years. 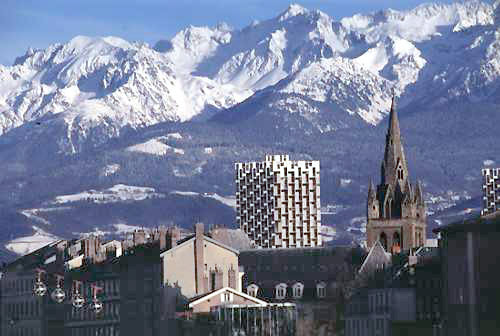 So far, the dozens of available PDF files - posters and transparencies (that I have seen during the day: lots of stuff) - from the LHC (that often seem to use as much as 1 inverse femtobarn of the data) seems to confirm the Standard Model (without a sign of a Higgs so far); see viXra blog for lots of blogging live.

The Standard Model is gradually claiming the sub-1-TeV or sub-few-TeV realm as its domain - which is a bizarre thing to say because its main last key feature, the Higgs sector, hasn't been found yet but (at least) it must exist below 1 TeV, too. This dominance of the Standard Model may change. However, some peaks in the Tevatron and older LHC's papers have already nearly died. For example, the dijet resonance near 3.3 TeV may have gone away. It's sensible to postpone the summary of all the casualties to the end of the conference - it's conceivable that there will be no survivors which will signal a devastating victory of conservative physics. ;-)

The strongest elimination as of Thursday evening is ATLAS' announcement that it sees no signs of SUSY - such as a sub-TeV gluino - in their 1/fb of data. See also newest Tevatron on SUSY (SM works).


The CDF Collaboration at the Fermilab has recently published several results that are almost certainly incorrect - the Wjj bump near 150 GeV (Dr Viviana blames the bump on Sheldon Cooper - see the screenshot in detail! - on the 7th slide from the end; but D0 still says that the bump is excluded) and the huge top-antitop mass difference are just two examples.

But the newest result is claimed to be even more statistically significant. So let me look at it again, despite the reduced credibility of CDF. Aidan Robson of CDF will be presenting his talk on

at 12:50 after the noon and it isn't another talk saying "no new physics". Quite on the contrary. They have looked at traces of collisions in which two Z-bosons existed at some point - potentially from a single decaying article - and they decomposed to one of the options below:
In the last two cases, they don't see anything and impose limits, and so on. However, in the first channel - four charged leptons - they see a shocking excess. And not just one.

The CDF folks tried to use their 6/fb of data to impose an upper limit on the cross section for - essentially the probability of - creating a heavy particle similar to an excited Randall-Sundrum graviton which subsequently decays to two Z-bosons which decay to four leptons.

Here's what they got: 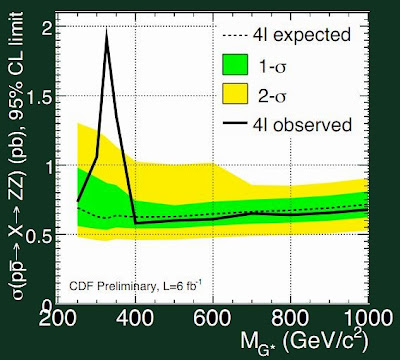 Visually, the excess of events near 327 GeV is comparable to 4 standard deviations. And it appears in the four-charged-leptons channel only. So it's like there's some fully neutral particle - for example the Randall-Sundrum particle - and it tells Nature: I shall decompose to 2 Z-bosons but only if you promise me that the Z-bosons will decay into four charged leptons - no jets and no neutrinos.

The signal above comes from 4 events and the previous paragraph indicates that the most likely explanation, due to Joe Romm, is that Rupert Murdoch hacked the Fermilab computers and added 4 fake events to have some fun. In fact, the graph above with the 4-sigma excess undersells what the CDF folks are claiming to be seeing. 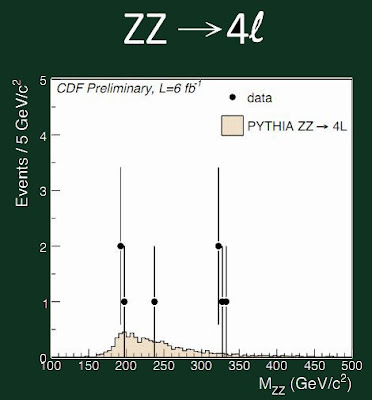 The number of events is divided according to the mass of the would-be initial particle that decayed to a ZZ pair. The spacing is 5 GeV and you see 2+1+1 events around 327 GeV. For comparison, there's the smooth bump of computer predictions - by PYTHIA.

PYTHIA implies that the probability that there are at least 4 events with the mass above 300 GeV is just 0.01%. That's already a small number - corresponding to more than a 3-sigma signal. But what is actually being seen is not just 4 events. It's 4 events whose energies fit into the same 15-GeV interval. With this extra condition, you will probably get a 0.001% probability or so that this is a statistical fluke.

What could the particle/physics producing the bump but only in the four charged lapton channels be? I don't know. I haven't spent much time with that so far. I have also no idea what kind of a defect on the detector could produce such a things. Hacking or a human intervention is the only thing that seems easily doable.

Let me just remind you that TRF has written about several anomalies that hinted at the existence of a 325 GeV particle.

In April 2011, I wrote about a D0 paper on a 4th generation top prime quark. In the muon+jets channel, they saw a 3-sigma excess of events hinting at a new particle - but possibly a different one. (The peak wasn't as sharp because they saw a 2.3-sigma excess pretty much for all high masses...) But note that D0 is a different detector so these are surely independent events. And it's a pretty different channel, too - one that has jets, among other differences.

(Note that today, CMS announced its lower limit on the mass of a fourth-generation top quark, 450 GeV, go after the "breaking news" icon, which excludes the \(t'\) interpretation of the D0 bump.)

Two of the CDF events near 325 GeV were previously described by Tommaso Dorigo. In December 2010, already those 2 events were pretty exciting. The CDF dataset already included 4.8/fb. Note that only 25% were added, to make it 6/fb in total, and those two events grew to four events at almost the same energy!

So if you were intrigued by the pair of events in 2010, you should be totally thrilled about the four events in 2011.

In order for me to make the events near 325 GeV even more confusing, let me mention that two weeks ago, we discussed 1/fb of the CMS data from the LHC - which may also be later presented at the conference - and 325 GeV was the very epicenter of the crazy deficit of events. The upper bound on a Higgs cross section they could impose was more than 3 sigma lower than the expected one.

So this kind of goes in the opposite direction but all those events indicate that something strange is going on near 325 GeV.
Luboš Motl v 9:25 AM
Share