NASA stands for "The National Aeronautics and Space Administration". You would associate it with astronauts, perhaps pilots, space research, and the Universe. Some young readers may even be ignorant about those things but NASA brought the first men to the Moon and has done lots of other fascinating things.

But look at this graph of funding from Nature: 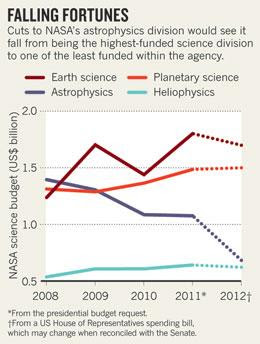 Meanwhile, planetary sciences are proposed to grow by one or a few percent to $1.5 billion and the Earth science should only drop by less than 5 percent to $1.7 billion, preserving its dominant position.


Just think how completely insane these ratios are. NASA has always been about the space (well, at least from the times when airplanes became ordinary), about flying away from Mother Earth. However, among these 4 scientific disciplines, astrophysics only has less than 15 percent of the money and astrophysics plus heliophysics have something like 28 percent.

No wonder that the James Webb Space Telescope, Hubble's successor, is likely to die.

Meanwhile, the Earth science budget is meant to remain high, for no good reason. There are no projects that would be as important - and not even as well-known - as the James Webb Space Telescope. Still, the Earth science section is scheduled to get 3 times more money than astrophysics. The reasons are clearly ideological, not meritocratic.

Much of this money - $1.7 billion - is paid for the people to spread lies about "global warming" which are convenient to make the government bigger.

The Earth_science/astrophysics budget ratio is scheduled to increase, between 2008 and 2012, by the factor (double ratio) of almost three! A factor of three added within three years is a pretty fast change: the (absolute) global mean temperature has increased by 0.2% in the last 100 years.

Would someone dare to claim that this tripling has nothing to do with the global warming hysteria? Would someone dare to claim that the typical people in NASA such as Gavin Schmidt are not affected by (relative) tripling of the money they're receiving? That they don't realize what they are actually being paid for? The likes of Gavin Schmidt get the tripling of the funds instead of life in prison that they deserve.

Needless to say, the tripling of NASA's Earth science budget relatively to NASA's astrophysics budget over 4 years has absolutely no conceivable rational explanation. It's all about the dislocation of resources and wasting of the U.S. taxpayer's money.

The House has its fingers in these nasty modifications of the structure of NASA's funding - and unsurprisingly, that's what Nature focuses upon. But Obama doesn't move a finger to stop this pernicious replacement of high-tech science and technology in NASA by low-brow ideological babbling, propaganda, lies, pseudoscience, and emotions.

These people actively work on the decomposition of the space research, astrophysics research, and cosmology research in the once famous country named America.

In 1966 when it was all about the space, NASA got 4.4 percent of the federal budget. This percentage dropped to 0.5 percent in recent years - by an order of magnitude. The massively high spending for the space research didn't prevent America from running budget surpluses throughout the 1950s and 1960s.
Luboš Motl v 7:07 PM
Share