Obama has failed as a manager 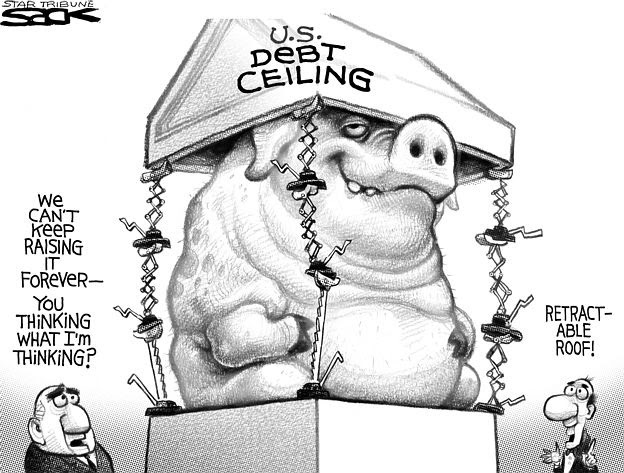 Well, the increase was actually 15%. The new figure is almost exactly 100 percent of the U.S. GDP. This huge increase was justified as a tool to deal with the recession. Well, the global recession had been clearly over in February 2010 so the debt shouldn't have been increasing at all.

Instead, 17 months later, President Obama is playing childish blackmailing games, expecting the debt ceiling to be automatically increased again - maybe by another 15%? Well, I am actually not exaggerating - I am underselling: a 17% or $2.4 trillion increase of the debt ceiling may be needed for the U.S. government to operate under business-as-usual by the end of 2012 (when the Mayan end of the world comes, anyway).

I assure you that if you increase the debt ceiling by 1% every month, you need about 4 years to get to the same situation as Greece - the situation of a nearly inevitable default and long-term insolvency. As the interest rates will be increasing, the situation will be getting worse increasingly quickly.

Given the genuinely high risk that Obama will be re-elected in 2012, this could mean a high probability of the end of the United States as we know it by 2016.


The debt ceiling is the primary number that determines your ability to spend if you're a president. It's the primary constraint you have to take into account. It's the law telling you how much money you're actually able to spend in excess of those that you collect.

So obviously, if you're responsible for a company similar to the United States government, you have to be careful about this key constraint and to plan accordingly. Barack Obama has self-evidently made no planning whatsoever so 17 months later, he is at risk of reaching the debt ceiling - and he has no idea what to do.

As Sarah Palin correctly pointed out, he has planned nothing and he has no idea about what his priorities are. He probably doesn't know what he will slash. He's just blackmailing the U.S. lawmakers, urging them to increase the debt ceiling - otherwise totally unexpected things will be done by an incompetent U.S. president. He's changing the U.S. government to an unstoppable growing pig that is increasingly intimidating everyone who want to prevent the pig from growing.

This is just not fair. The president shoulnd't be blackmailing in this way. It's primarily his fault - the outrageous miscalculations in his spending, by which he was buying many people, regardless of the consequences - that the hugely increased debt ceiling is being approached again. He should have acted as what he is - a failed student who has borrowed a big company for a while by a chance and he has utterly failed to manage it.

Instead, what he's doing is to arrogantly blackmail the lawmakers, urging them to codify his mismanagement as a new standard and allow him to drag the U.S. into an unsustainable vicious loop.

Obama should publicly state that he understands that he has failed as a manager - because so far, it's not even clear whether he understands this elementary point - and to announce his steps how to fix the messy situation he has caused.

Clearly, this will mean that he will have to seriously restrict or temporarily (or permanently) close some government agencies in coming days (something he didn't care for a year or years) - the likes of the EPA are the examples of the most parasitic tumors that should be closed immediately and probably permanently. I would even understand if he lowered the pensions of the "richer" U.S. pensioners. That would be appropriate for a left-wing president. But he should sketch his plans in advance instead of blackmailing other politicians by the apparent fact that an unpredictable amateur with no plan managed to sit in the White House.

I don't believe that a lowered rating - and even a default - is a disaster but it is surely one of the worst "failing grades" that a president may get. And this would clearly be his own fault because the previous increase of the debt ceiling already occurred during his presidency.

It's obvious that the highest rating that the U.S. has enjoyed since 1917 - at least in Moody's case - is something that a president should try not to lose. On the other hand, from the viewpoint of those who are not responsible for the U.S. budget and related things, there are much more important things at stake than the highest rating. Obama has brought America on an unsustainable, Greek Lite path which may become a full-fledged Greek path. Moreover, he seems completely unrepentant. If the lowered rating - and even the (hopefully temporary) default - is needed to teach this amateur that what he is doing is really unacceptable, then the G.O.P. lawmakers should do their work towards the lowered rating and/or default.

I am sure that many of them inevitably have mixed feelings. But some formal changes of a rating - some letters that some three companies write somewhere, who cares - are much less important than the long-term threats for America that have unfortunately become medium-term threats.

Needless to say, I will personally lose some (mini) "wealth" because of the expected irrational hysteria in the markets in the case that the U.S. rating is lowered and/or the technical state of a default appears for some time (it wouldn't be the first time, in fact). It's similar to the spanking of a little child who is chewing a toxic thing: you may hurt his buttocks but it's still better than if the child poisons itself next year - and Obama the Kid with his irresponsible, populist, outrageous management of the U.S. budget is clearly determined to do such a thing very soon.

Meanwhile, if I were an employee of a rating agency, I would lower America's AAA to the next lower grade already today, if not earlier. AAA means essentially no risk of a default and it's just an incorrect evaluation of the reality that America is in this situation today. And if I were a rational investor, my reaction to a lowered rating would be completely modest because I would know that the lowered rating was a correct move. Unfortunately, most market players are not rational.

However, the real problems might be worse than a week-long default: the long-term solvency may soon become questionable, too.
Luboš Motl v 7:51 PM
Share