When it comes to the last complication, it wasn't too much of a problem for Kvitová because in the previous match, she had to defeat Ms Victoria Azarenka of Belarus whose sounds are almost identical to Sharapova's ones. :-)


So Petra just defeated Sharapova 6-3, 6-4 in the final Wimbledon match. The female trophy - which includes GBP 1.1 million - is returning to Czechia after 13 years when it was won by Ms Jana Novotná. 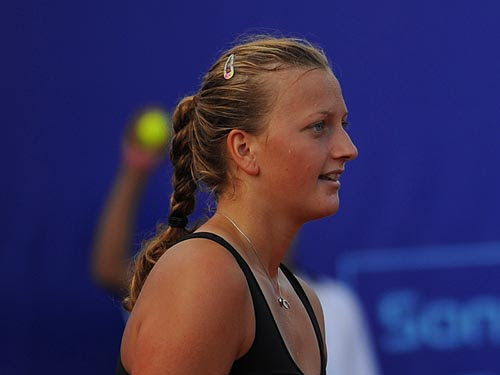 Kvitová had faster balls - by 15 kilometers per hour - which was an important cornerstone of her offensive play and she was clearly considering herself to be the better, more reliable player on the grass. A posteriori, almost all sports journalists seem to agree: a new queen was born. She has also had a much higher diversity of various techniques and strategies. There was no moment during the final match in which it was more reasonable than not to expect that Sharapova would win. Aside from many breaks, the final game of the match was fun: 15-0, 30-0, 40-0, and - finally, to mark the end of the tournament - Kvitová scored the first ace of the match even though she "didn't intend to". ;-)

Petra Kvitová comes from Fulnek - which is a town with almost 6 thousand people ;-) in Northern Moravia; to compare, Sharapova's birthplace is a huge city (Nyagan in Siberia, 54 thousand people). Her father is a teacher - which is not a bad profession for Fulnek where John Amos Comenius, the Czech "teacher of the nations", spent 3 years of his life. She prefers jeans and T-shirts and just like your humble correspondent, she doesn't quite understand how fashion designers may make their living with such a useless and worthless activity. :-)

The Czech-born U.S. citizen Martina Navrátilová won the tournament in 78, 79, 82, 83, 84, 85, 86, 87, and 90. Her victory in 1990 was also the last victory of a left-handed player. Wimbledon had to wait for 21 years - until today - when another player of the same chirality grabbed the title. Navrátilová was able to correctly predict Kvitová's victory two months ago (however, right before the match, Navrátilová changed her mind and said that Kvitová only had a 40 percent chance to win the match) and the meeting of these two women today was emotional.

A cool attitude and nerves out of steel are typical for Kvitová. She wasn't nervous - after all, it was just a Wimbledon tournament and only 1 million pounds were at stake - it's like the question whether you win icecream, not a big issue. I mean 20 tons of icecream. ;-)