Let me begin with my version of the graph, to be explained at the end. 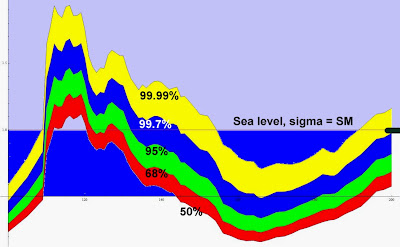 Phil Gibbs has digitized the graphs indicating the cross sections and exclusions for the Higgs mass, as presented by the D0, CDF, ATLAS, and CMS Collaborations during the recent two days.

I have gotten a copy of the D0 and CDF numbers and got a similar result in Mathematica as he did even though our methods almost certainly differ. Only on Saturday evening, I could apply my formulae to the combination to the LHC results. But Phil's overall results were surely lovable when I saw them (and my version became even more lovable later haha). See: 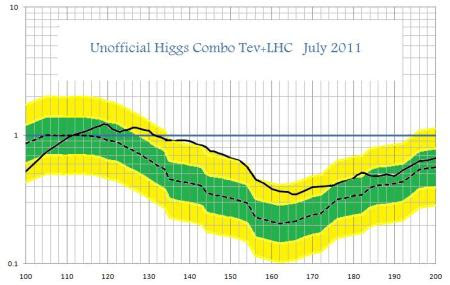 You should understand the rules of the game. The blue horizontal line in the middle of the picture is the sea level. If you're sitting at the thick wiggly black line somewhere and you're below the blue sea level, you will glub glub glub glub to the bottom of the sea and the corresponding value of the Higgs mass - on the x-axis - is excluded at the 95% confidence level.


So only the values above the sea level survive.

You see that the picture allows Higgses between 111 and 131 GeV only. And especially those at 119 and 127 GeV are favored a little bit more than the neighbors. :-)

If 200 GeV is not enough for you, here is a graph that continues to higher a priori possible masses: 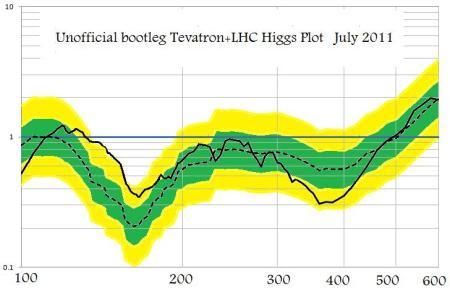 Higgses above 500 GeV are allowed, too. Otherwise everything has drowned! :-)

Of course, if you could trust this graph, it would be just excellent. The lightest Higgs would be in the 115-130 GeV window and there would probably be one more Higgs either in the same window or above 500 GeV. A beautiful graph potentially supporting a two-Higgs supersymmetric model. Or the Standard Model that becomes unstable at some below-Planckian energy scale.

Meanwhile, the experiments have chased the squark and gluino masses out of the visible arena and above 1 TeV so one can no longer reasonably expect the rest of supersymmetry - or any other new physics, for that matter - to be a low-lying fruit.

My version of the graph

Here is my version of the graph for the 100-200 GeV region of the masses: click to zoom in.

Tevatron-LHC unofficial TRF Higgs combo. The 100-110 GeV interval is only calculated from the Tevatron data: that's the source of the discontinuity at 110 GeV. No idea why Phil doesn't see this discontinuity.

If you're satisfied with a 50% "certainty", look at the lower boundary of the red strip. Whenever it's below the sea level, the corresponding value of the Higgs mass on the x-axis is excluded at a 50% confidence level. Only 112-120 GeV is allowed. You see that I got nicer, sharper peaks than Phil in this region (well, mostly because my graph is more stretched in the y-direction, much like temperature graphs that want to pretend that the warming trends are substantial haha) - suggesting that 112-120 GeV is really preferred and there is an excess there (especially at 112, 116, 119 GeV - and 116 GeV is the top peak - but this accuracy is really insignificant noise and you shouldn't take it seriously).

The upper boundary of the green strip is 95% confidence level. It's a sensible choice. Something like 110-131 GeV is allowed. 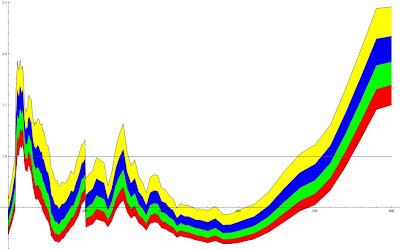 Tevatron-LHC unofficial TRF Higgs combo. The 100-110 GeV interval is only calculated from the Tevatron data and the 200-600 GeV interval only comes from the LHC data; these are the causes of the discontinuities at 110, 200 GeV.


Download a Mathematica notebook (search for the file named "combining...") that drew the graphs; by L.M., digitization of the official, uncombined graphs by Phil Gibbs


Note that LEP has effectively excluded the Higgs masses up to 114 GeV. So if you trust the graphs of mine, it's legitimate to guess that it's more likely than not that the lightest Higgs mass is between 115 and 120 GeV. Quite an accuracy. Just to be sure, the total Higgs width at those low masses is a few percent of a GeV: it should be very sharp but it probably gets fuzzy because of inaccurate measurements.

Update: The graphs should be moved up by nearly 2 widths of the band (to become less excluding), approximately, in the (not too important) 100-110 GeV and 200-600 GeV regions because of some very subtle counting of the confidence level that I don't want to explain in detail. This will reduce, but not eliminate, the discontinuities over there.

The qualitative effect is almost none in the 100-110 GeV which is excluded anyway. The 250 GeV island becomes slightly more allowed, and new islands near 290 GeV and 210 GeV become a bit viable. The lower bounds on the 500-GeV-like Higgs will drop by 50 GeV or so.

BTW I learned that Phil thought that the y-axis on the LHC, Tevatron graphs was a "confidence level" - it is (an upper limit on) a cross section - and he used an ad hoc formula that wouldn't seem to have a justification even if the y-axis were a confidence level. In effect, the formula neglected large excesses of events if there were any which is why his peaks are so subdued. It is a bit of a coincidence that his graphs look so realistic. ;-)

There are also possible bugs in my formulae and graphs but at least they're based on an understanding of what the input graphs roughly mean when it comes to their axes. ;-)
Luboš Motl v 7:10 PM
Share