You may have forgotten about it but one of the early stimuli that energized the recent wave of hysteria about the so-called "global warming" was a claimed observation of four dead polar bears floating on the sea after a thunderstorm in September 2004 - exactly when TRF was getting started. 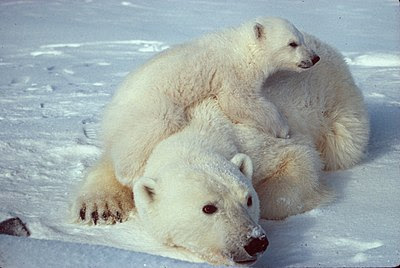 The main relevant articles ultimately appeared in 2005 and 2006:

The authors of the 2006 article, Charles Monnett (lead author of both articles) and Jeffrey S. Gleason, have de facto claimed that 5/6 of a group of polar bears died in a 16-year period and it's surely due to global warming and it's gonna get worse.


As the media - see e.g. AP and CBS news - just figured out, Charles Monnett, employed by the U.S. Bureau of Ocean Energy, Management, Regulation, and Enforcement, was put on leave until the verdict about the investigation of his "integrity issues". Obama administration officials are behind the investigation: they confiscated Monnett's hard drives and notebooks, among other possible proofs.

Gleason, the second author in both papers, has told the investigators that none of the polar bears in either article had anything real to do with global warming (and they haven't even mentioned the term global warming) and Monnett has added this spin to his interpretations (which has surely sweetened his life until 2011, I add).

As you may determine if you study some literature, Charles Monnett is the world's main scientist behind the idea that polar bears are increasingly drowning because of global warming - something that added a couple of scenes to Al Gore's movie (which was a part of the investigation as well), too. Until these days, he de facto controlled the U.S. Arctic Wildlife research and decided about $50 million of its funding (see the AP report).

Arctic sea ice as of yesterday, via The Cryosphere Today. It's Summer and the ice is receding, reaching the minimum in mid September. Some polar bears may have chosen the pack ice for the Summer which makes it impossible - as the gap has grown - to reach e.g. North Asia. If they got stuck on a shrinking area of pack ice near the pole and if the sea ice went to zero, they would be in trouble but be sure it won't happen in 2011.

He was told the charges. They are related to his polar bear research and chances are 50-50 that they can either demonstrate that this whole research has been fraudulent or the same thing holds for the "climate change" interpretations of it. Well, it's even conceivable that we will learn that Monnett has actually tranquillized and killed the four poor polar bears in 2004. See Where are all the drowning polar bears? at World Climate Report (2008) for more details why Monnett's results never looked right.

It seems increasingly likely that the research backing the global warming doctrine is corrupt at every conceivable level. We can't know what the final verdict of the investigation will be - but I am pleasantly surprised that the Obama administration dares to investigate at all when the target is a top doomsday-believing would-be defender of a climatic holy cow, I mean the holy polar bear.

Just a trivial point: many people, including myself, tended to think in the past that the polar bears live near the North Pole where the ice has been diminishing in recent 3 decades (and doing many other things before that) which would clearly affect them. If you have these tendencies, you should check the map of their habitat. Of course that the normal range is on the firm land, near the Arctic Circle, far enough from the pole, and the experienced animals probably know damn well that the pack ice and especially open sea increase the likelihood of drowning. Right now in the Summer, when the ice is still receding, they're probably careful not to get too far from the land. (The minimum ice is achieved around mid September.)

Five days ago, media highlighted the observations that polar bears may swim up to 700 km without a pause.

For many reasons, I don't really think that the polar bears are endangered or threatened. But if they were, I would be "a support of actions to save them and my guess is that it couldn't cost more than a billion of dollars (a fancy Mercedes for each polar bear would cost just about that). At any rate, it's preposterous to use polar bears as an argument in the attempts to reduce the integrated GDP by trillions of dollars.

Incidentally, the Czech media inform about the Monnett case. They clearly copy from each other - because all the titles are variations of "Father of global warming theory has 'made a scientific error somewhere'". I can't translate the exact flavor of the phrase but it is meant to sound analogous to a classic Czech movie quote (from a movie called "Pelíšky"), "the comrades from East Germany had to do a mistake somewhere", that a communist from the 1950s says after he offers revolutionary plastic spoons to his 10 friends and family members and all the plastic spoons melt in coffee. :-)

One of the intense internal political wars in Czechia - that is however viewed as totally uninteresting by most voters - is the battle against the bark beetle which has attacked the Bohemian Forest, hills and nice forests on the Bavarian border which also hosts a national park, Šumava.

This is the bark beetle. In fact, it is not the only species that is tying itself to the trees. Here is another species doing the same thing:

A tree hugger. This one is cuter, I think. ;-) In fact, about 15 tree huggers attached themselves to 4 trees that were scheduled to be cut. Tree huggers are among the most important allies fighting in the Bark Beetle Axis, led by the bark beetles. They're not the only ones. Tonight, the Czech Hussite Protestant Church will serve a mass to commemorate several fallen trees and to pray to Jesus so that He accepts the trees' soules. ;-)

Police was trying to fight against the tree huggers bound by ropes to the trees today while other professionals are trying to fight against the bark beetles themselves. ;-) Tree huggers have been attacking not only the forest management personnel but also the owners of dogs. Of course, the local population is against the tree huggers - they would prefer to live in a green forest, not an eaten one, so they claim that a human being is not less than a bark beetle. President Klaus - right now in Melbourne - said that he's more afraid of the environmentalists than of the Islamic terrorists.

The European bureaucrats have joined the tree huggers today, too. It is not permissible to cut trees around the national forest, they claim, and they plan to impose a fine on the Czech government for cutting trees on our territory.

On the other side of the War on Bark Beetles, you find the former prime minister Mr Miloš Zeman, a retired man on the Vysočina Hills (whom I recently mentioned because of his statements about the Islamic anti-civilization). He claims that the managers of the national park are incompetent because they aren't capable of a successful fight against the bark beetle. He has quantified the damages caused by the pest as nearly 2 billion dollars.

It is surely romantic to have primeval forests. But truth to be told, even Boubín - the ultimate virgin forest in Czechia - looked almost like an ordinary forest to me. When humans see that leaving the situation as it is leads to bad results, it's simply inhuman to pretend that "we are not there". So I view some interventions to the system - even around national parks - to be naturally connected with our presence.

When I say these things, I must say that I always feel sad even when a tree is killed. Nevertheless, I have cut about as many trees in my life (usually in Pilsen, fruit trees) as the number of trees whom I helped to live (usually in Šumava)...
Luboš Motl v 11:42 AM
Share