If you forgot about the name, Al Gore is a former U.S. vice-president and the de facto leader of the world's global warming alarmist movement. He remains at large; he hasn't even been forced to return the Nobel Prize yet.

One week ago, on July 12th, he has launched his new Climate Reality Project: he and the whole world he apparently possesses will try to live in the reality chosen by Gore himself for a whopping 24 hours - on September 14th.

The center of the new project is Al Gore's new server which starts with yet another doomsday countdown. This is where the devout fans will be allowed to watch their Master live - next to a dying polar bear and a melting glacier - on September 14th. 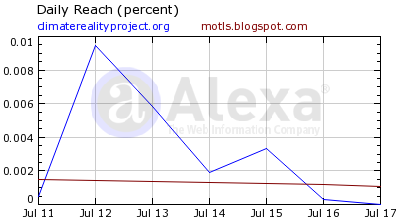 There's only one problem. You may see that on July 12th when lots of media praised the man for his amazing new stunt, inviting the whole world to join, his project actually beat The Reference Frame by a factor of six. However, on July 16th, this blog was ahead of Gore's megaproject again - by a factor of six. And on July 17th, Gore was de facto back to zero.

Mr Gore, if you only need 15 minutes of fame, it's enough to be interested in the reality for 1 day. However, if you wanted to match The Reference Frame for a whole week or longer, you will have to spent more time by trying to observe and understand the reality. The type of cheap demagogy you are good at may have been enough in 2005 - but it's definitely no longer enough in 2011.


Most of the people who are interested in the climate issue impartially - or in one way or another - already know everything about the reality when it comes to some frequent, emotionally hyped talking points that you apparently still consider sufficient. If they're interested in something, it's much more advanced questions than what you're capable of addressing.


BBC will abolish its impartiality laws

Meanwhile, the al-Gore eco-terrorist training camp in which he has produced 2,000 little Al Gores is boasting new achievements. Some of the trainees have filled a BBC committee. As Daily Mail reports, they have said that impartiality is one of the aspects of the discredited democracy.

So they will overhaul the rules on impartiality and order all BBC employees to challenge skeptics "more vigorously" and give them less space. The obligation to promote the pseudoscientific alarmist delusions will become a part of the BBC job contracts. The justification is that the debate among the eco-terrorists has already moved "beyond whether a theory is true or not" to the question what is the optimum strategy to destroyed the industrial civilization.

Tomorrow, Czech President Václav Klaus is leaving for Australia. People in Oz should check the schedule.

Be sure that I consider $180 per lecture to be excessively expensive, too. But in 2007, I was actually ordered to meet Prof Klaus so I paid $700 for a visit of Washington D.C. - which was nice, of course (and my only visit to D.C., maybe ever). So it's not true that I wouldn't possibly pay such a thing from my wallet.

If you have 12+13 minutes, you may check some reasonably fiery ;-) words by Klaus at the recent Conference on the Science and Economics of Climate Change held at the Howard Theatre, Downing College, Cambridge, UK on 10th May 2011. The second part is here.

A guy in Oregon was very lucky. 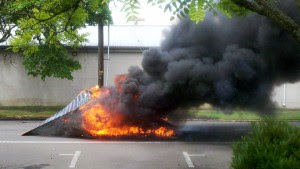 A short in one of the 500+ lithium-ion batteries led to an explosion but he escaped. He was in a good mood because he avoided an injury. So the only loss was his lost $5 shoe. And yeah, if there are any pedants among the TRF readers, also the $100,000 solar vehicle is gone.

Be careful about relatively untested alternative vehicles and sources of energy.
Luboš Motl v 8:50 AM
Share