Why a Higgs boson could also have mass 144 GeV

These have been hugely hectic days in particle physics during which the particle physicists have been drowning in a greater sea of new empirical information than at any 3-day period during the last 35 years, to say the least.

Someone has just observed Higgs at the CMS at CERN's LHC.

Nevertheless, the main result is that the Standard Model works (all new physics without any distinction has been moved above 1 TeV and sometimes several TeV). But the Standard Model's crucial component, the Higgs sector, is only slowly starting to emerge. The mass of the Higgs boson - or masses if there are several Higgs bosons - remains unknown although lots of new data about these things have modified our expectations.

Here is an example of the rapidly changing situation.

On Thursday, the Fermilab published a press release in which it claimed that the Higgs boson, if it exists, has most likely mass between 114 and 137 GeV.


This has clearly been the result of some work that has employed some of America's - and world's - best experimenters and maybe even phenomenologists for months if not years. You would expect such insights to survive a few years - or at least a week. ;-) As a disciplined layman, you could have thought: when those guys say such a thing, it must be true. Their "very likely" is my "certainly". If the Fermilab could say something that's not true, they could also incorrectly move the radioactive fuel in the nuclear power plants and all of us would explode or something like that. :-)

Well, except that this expectation of yours would be wrong. "Very likely" just doesn't mean "certainly", not even when it's said by a large institution with lots of very bright people in it. And indeed, the information about the mass has changed within three days once again. See this BBC story on Sunday:

In Grenoble as well as outside Grenoble, the Fermilab physicists have clearly massively interacted with the physicists at the LHC and by Sunday, they decided that the most likely Higgs mass is not 114-137 GeV but rather 140-145 GeV. In fact, the Fermilab physicists suddenly realized that they have seen such candidate Higgs bosons in the 140-145 GeV interval as well! The figure 144 GeV seems to be the honorable queen of the interval 114-137 GeV. :-) So they may form a new consensus with their European comrades.

(A 140 GeV Higgs has been mentioned in numerous articles on his blog. See this January 2011 article for a text and links to other texts. 140 GeV also appeared in a recent list of preliminary CMS bumps.)

As an observer, you may be shaken. Is there something you may rely upon in this world? :-) What about your humble correspondent who has claimed that the mass is most likely between 115 and 131 GeV, and 115-120 GeV is actually preferred? Such a principled, stubborn guy will surely insist on his numbers, right?

So you came here to confirm your expectation and certainty in this world that's constantly spinning - and spinning everything on it as well. Visiting a blog that doesn't spin things in the world that is spinning all the time gives you a pleasant vertigo. So what do I tell you? :-)

Well, I will tell you that I also think that the Higgs boson - or a Higgs boson - could have the mass close to 144 GeV or so. :-) The other kinds of evidence I may reconstruct lead me to this conclusion - and listening to the evidence is actually a key principle I obey. You shouldn't be shocked that I have changed my mind about the inevitable exclusions in 24 hours because during this week, 24 hours is roughly equivalent to ordinary 24 months or 2 years. It's just like in an interpretation of the Bible where 1 day in Genesis equals approximately 2 billion years. :-)

Here is the most straightforward way to see that something might be special about 144 GeV or a nearby mass.

Take the combined graphs from the four experiments - ATLAS, CMS, D0, and CDF. Look at the difference between the observed upper bound and the expected upper bound for each experiment. Express it in the units of the standard deviation - the thickness of the yellow/green bands. Add all these experiments and divide the results by the square root of four - because there are four experiments.

This simple sum of the excesses or deficits will look something like this: 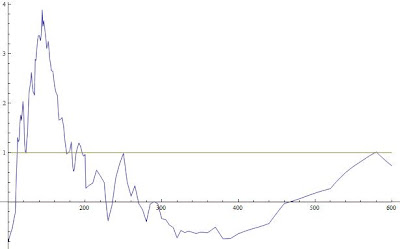 Control/click to zoom in a little bit in a new tab.

The behavior above 180 GeV is uninteresting - plus minus one standard deviation or so. But you see a mountain range between 100 and 180 GeV. There is a nice narrow peak near 116 GeV on the left, followed by a very distinct hole right above 120 GeV. But can you see the Mount Everest in the middle? Its main peak is located at 144 GeV and the total excess from the four experiments (divided by two) is closer to 4 sigma than to 3 sigma.

You must realize that it's much easier to find the Higgs boson at 144 GeV (if it is there) or exclude it (if it is not there) than it is to do the same thing with a 116 GeV Higgs boson. So it shouldn't be shocking if one can get significant deviations for the heavier mass earlier than for the lower mass.

Mount Everest could actually be a pair of mountains: one is a 116 GeV mountain on the left and the other one is a 144 GeV (8,848 meters) on the right. The second greatest peak, K2 at 116 GeV (8,611 meters, the conversion is nonlinear), is actually more intensely revered by the climbers because it's tougher and more important. The smaller peak on the picture above is probably not K2 :-) but you get the point.

However, the huge width of the Mt Everest is annoying. It doesn't look terribly compatible with the expectations you have for the Higgs. Just to remind you, the total width of a Higgs boson below 150 GeV is almost certainly just a few percent of a GeV. It should look like a very thin peak, not a mountain range whose width is 50 GeV.

It's surely confusing if we only look at those graphs.

Nevertheless, the experimental physicists have lots of data that we don't see in the final papers. Given their status of insider traders, it is not really possible to compete with them in the interpretations. There are different ways how to "combine" the information on the partial graphs. Some of these ways may amplify the "upward excursions" (contributing to a positive search for a signal) while others focus on and codify the "downward exclusions" (contributing to the irreversibility of exclusions). Moreover, the question whether we want upward or downward excursions to be "more irreversible" may depend on the expected level of exclusion.

Different methods of this kind will lead to different graphs and different expectations. However, if the guys at the Fermilab see a couple of events that seem to imply extremely similar values of the Higgs mass, well, that's probably a better guide than some final graphs that still seem way to noisy and confusing. I would surely try to look for narrow peaks in many ways I could think of.

A June 2010 guess about the five God particle masses.

As far as I can say, based on these graphs and other knowledge, it's still plausible that there are two Higgses - a light one at 116 GeV that is harder to be found and a heavier one at 144 GeV that is easier to be found. You know, if you observe a 144 GeV Higgs but if you can also show that high-precision physics makes it very unlikely, you have evidence that the Standard Model isn't the whole story. Both of the supersymmetry-like Higgses could have different cross sections in the Standard Model, maybe lower for one of them, so its mass could even be eliminated by methods assuming the validity of the Standard Model.

None of those numbers is known quite accurately and the story keeps on changing which is a good enough reason for you to think that the conclusion is not yet settled and will probably require at least a few more months.

However, the conference in Grenoble is not over yet. We may still hear some shocking news during the final plenary talks on Wednesday afternoon French Summer Time. Despite the tons of information, many physicists surely consider the announcements in Grenoble to be a disappointment so far. But some TRFic news may still arrive by Wednesday! (Thanks to Pbef for this cool, TRFic new adjective!) :-)
Luboš Motl v 7:59 PM
Share