Why is the Earth so fat?


Mark Eichenlaub: I made a naive calculation of the height of Earth's equatorial bulge and found that it should be about 10 km. The true height is about 20 km. My question is: why is there this discrepancy? 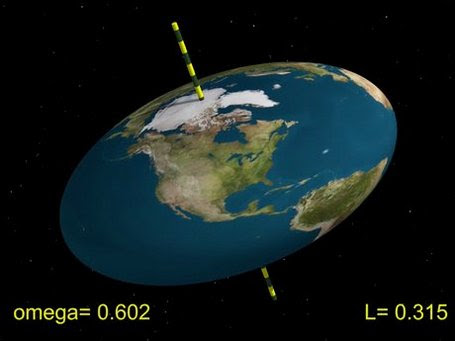 Don't be too scared: global warming hasn't melted the Earth yet. The picture is exaggerated.

The calculation I did was to imagine placing a ball down on the spinning Earth. Wherever I place it, it shouldn't move.

The gravitational potential per unit mass of the ball is \(hg\), with \(h\) the height above the pole-to-center distance of the Earth (call that \(R\)) and \(g\) gravitational acceleration.

Gravity wants to pull the ball towards the poles, away from the bulge. It is balanced by the centrifugal force, which has a potential \(-\omega^2R^2\sin^2\theta/2\) per unit mass, with \(\omega\) Earth's angular velocity and \(\theta\) the angle from the north pole. This comes taking what in an inertial frame would be the ball's kinetic energy and making it a potential in the accelerating frame.


If the ball doesn't move, this potential must be constant, so

we might as well let the constant be zero and write

According to Wikipedia [1], the Earth is 42.72 km wider in diameter at the equator than pole-to-pole, meaning the bulge is about twice as large as I expected. (Wikipedia cites diameter; I estimated radius.)

Where is the extra bulge coming from? My simple calculation uses \(g\) and \(R\) as constants, but neither varies more than a percent or so. It's true the Earth does not have uniform density, but it's not clear to me how this should affect the calculation, so long as the density distribution is still spherically-symmetric (or nearly so).

(Wikipedia also includes an expression [2], without derivation, that agrees with mine.)


Luboš Motl: The error is that you assume that the density distribution is "nearly spherically symmetric". It's far enough from spherical symmetry if you want to calculate first-order subleading effects such as the equatorial bulge. If your goal is to compute the deviations of the sea level away from the spherical symmetry (to the first order), it is inconsistent to neglect equally large, first-order corrections to the spherical symmetry on the other side - the source of gravity. In other words, the term \(hg\) in your potential is wrong.

Just imagine that the Earth is an ellipsoid with an equatorial bulge, it's not spinning, and there's no water on the surface. What would be the potential on the surface or the potential at a fixed distance from the center of the ellipsoid? You have de facto assumed that in this case, it would be

where \(R\) is the fixed Earth's radius (of a spherical matter distribution) and \(R+h(\theta)\) is the actual distance of the probe from the origin (center of Earth). However, by this Ansatz, you have only acknowledged the variable distance of the probe from a spherically symmetric source of gravity: you have still neglected the bulge's contribution to the non-sphericity of the gravitational field.

If you include the non-spherically-symmetric correction to the gravitational field of the Earth, \(hg\) will approximately change to

and correspondingly, the required bulge \(\Delta h\) will have to be doubled to compensate for the rotational potential. A heuristic explanation of the factor of \(1/2\) is that the true potential above an ellipsoid depends on "something in between" the distance from the center of mass and the distance from the surface. In other words, a "constant potential surface" around an ellipsoidal source of matter is "exactly in between" the actual surface of the ellipsoid and the spherical \(R={\rm const}\) surface.

I will try to add more accurate formulae for the gravitational field of the ellipsoid in an updated version of this answer.

Update: gravitational field of an ellipsoid

I have numerically verified that the gravitational field of the ellipsoid has exactly the halving effect I sketched above, using a Monte Carlo Mathematica code - to avoid double integrals which might be calculable analytically but I just found it annoying so far.

Use the Mathematica code above: its goal is to calculate a single purely numerical constant because the proportionality of the non-sphericity of the gravitational field to the bulge; mass; Newton's constant is self-evident. The final number that is printed by the code is the average value of \(1/r\). If {1.1, 0, 0} is chosen instead of {0, 0, 1.1} at the beginning, the program generates 0.89 instead of 0.94. That proves that the gravitational potential of the ellipsoid behaves as

at distance \(R\) from the origin where \(h\) is the local height of the surface relatively to the idealized spherical surface.

In the code above, I chose the ellipsoid with radii (0.9, 0.9, 1) which is a prolate spheroid (long, stick-like), unlike the Earth which is close to an oblate spheroid (flat, disk-like). So don't be confused by some signs - they work out OK.

Mariano C. has pointed out the following solution by a rather well-known author:


By the way, if you open the Physics Stack Exchange, you will see that there's still some uncertainty about the numerical multiplicative correction - is it 0.5 or 0.4 or 0.6? My numerical calculations showed that it should be much closer to 0.5 than 0.4 or 0.6 but it wasn't exact. I would like a convincing enough answer for the integral - the average value of \(1/r\) in an ellipsoid. In the real world, the Earth's density is non-uniform but the uniform mathematical problem is interesting enough.
Luboš Motl v 10:42 PM
Share