and noticed that it has a perfect, 5-star rating, I had to tell myself: holy cow! Do the skeptics really abandon 100% of their skepticism in order to believe this self-evident garbage? Is it just because there's not a lot of publicity about this "technology" (so far)? Well, it may change. 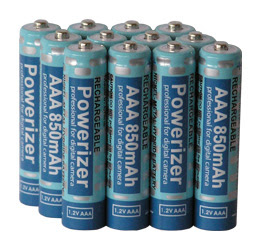 It's being claimed that you may buy a cold fusion power plant sometime next year. You will receive a simple low-energy gadget. It has some hydrogen and nickel in it, and some electricity. So it doesn't differ from an NiMH battery so much.

Here a miracle occurs. You surely don't want to be annoyed by some technical details, do you? It's enough to trust the ingenious experts who invented - despite the disbelief of the physicists - a free energy source for you. Just for most technically inclined readers, here is the detailed engineering scheme of the new device: 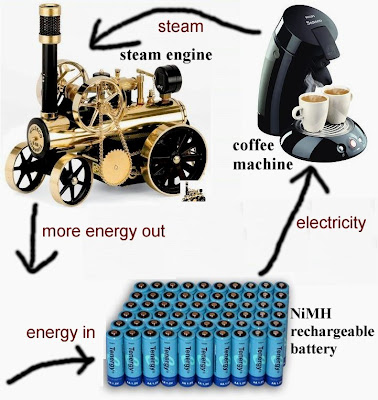 And now, while emitting some - surely harmless - beta rays, neutrinos, and gamma rays, you have turned your nickel into copper (unfortunately not gold) while getting 1 megawatt of energy along the way. There's apparently nothing problematic about it and WUWT readers just vote that it is a 5 stars project. Well, it's plausible that the results wouldn't be much more sensible here but I still think that they would be at least slightly more sensible.


Werme's article contains no science - it's purely about marketing: it tries to answer questions "why should I care, what about me" etc. but never pays any attention how this could possibly work. You have to go to other sources to see what they're claiming to be achieving in their gadgets.

By a Google search, you may instantly find Journal of Nuclear Physics which is actually no journal of nuclear physics but a crackpot blog promoting this particular "fusion" (not to speak about similar crackpot theories of discrete spacetime - indeed, it does belong there, too). An even more official Free Energy Truth blog just announced the beginning of the World War III. :-)

One of the pages tries to answer the question how can 30% of nickel become copper (note that \(Ni,Cu\) have \(Z=28,29\), respectively) in those batteries. A good question, indeed. ;-) Well, the first reaction that should occur is
\[Ni_{58} + p \to Cu_{59} \]
By comparing the \(E=mc^2\) energies stored in the rest masses, you will may see that this produces about \(4 {\rm MeV}\) of energy. Nice and innocent. The lifetime of copper 58 is 118 seconds and then your healthy reactor is supposed to \(\beta^+\)-decay:
\[Cu_{59} \to Ni_{59}+\nu + e^+ \]
The positron annihilates with an electron to two gamma rays. Everyone is happy and your clean thermonuclear reactor may be used in your infant's bedroom. (This is of course also rubbish. Even if your substance were beta-decaying at this huge rate, it would produce lots of harmful ionizing radiation.)

But wait a minute. Does it make any sense? Can the nuclei get close to each other for the fusion to occur? The proton and the initial nickel nucleus are positively charged, so they repel by the electrostatic (Coulomb) interaction. In fact, the maximum of the potential energy - when the distance is such that they nearly touch (but not quite, so that the attractive strong force is still essentially zero) - is a few \({\rm MeV}\) once again. You surely won't be able to subsidize the neutron - or the nickel nucleus - by your NiMH battery whose voltage is \(1.5\, {\rm V}\).

Note that if a charged particle with charge \(+e\) - such as the proton - is accelerated in between the two poles of such a \(1.5\, {\rm V}\) battery, it will acquire energy \(1.5\, {\rm eV}\). You know, this is why the unit of energy is called an electronvolt: the unit is a product of an electron and a Volt. Because "mega" is "one million", you need millions of batteries to add up their voltages. You need to create a collider of this kind that will shoot the protons against the nickel nuclei. If it works, it will surely not resemble a NiMH battery.

But the creative guys around Rossi have a solution. In the case that you're going to laugh out loud, be aware that the picture is not mine; it is taken from the pages promoting this stuff I linked above.

Picture via Journal of Nuclear Physics

You see that they "reject" a proton: a nucleus decides that a proton is a heretic who has to be excommunicated (I guess they meant "eject", but this is just the beginning). The angry proton borrows sunglasses from a carnival, masks himself to look like a neutron, and by this method borrowed from Agent 007 comfortably (and without any electrostatic repulsion) marches into the initial nickel atom, in order to revolutionize it and turn it into copper.

So Rossi's apparatus is mainly a device that produces these sunglasses for the proton and trains him to act as Agent 007. I mean James Bond.

Another page on the server tries to tell you additional details about the "probable" mechanism of the hydrogen/nickel cold fusion. (Note that they first managed to create a tabletop fusion reactor, and then they were looking how it's possible that they were so ingenious to guess it.) The page clarifies the training camp for the proton agents. How do they pretend to be neutrons? Well, they borrow an electron and produce a "mini-atom". That's just like an atom but it is as small as a nucleus. ;-)

Experienced TRF readers may recognize that at this moment, the cold fusion industry has incorporated another revolutionary discipline of physics, one about the hydrinos coined by Randell Mills who has earned tens of millions of dollars with this utterly stupid scam. The mini-atom cold fusion explanations are pretty much copied from his hydrino papers. Maybe these two groups even pay dividends to each other.

Don't get me wrong. I find it plausible (yet unlikely) that a clever engineering setup will be found that will allow the protons in similar reactions to overcome the Coulomb barrier in the future, despite a "cold environment". Maybe a few protons will be exposed to some huge combined electromagnetic force from many electrons squeezed into a small volume. (Similar strategies exist in which laser beams are pushing the protons or nuclei.)

One by one, the protons will be fused, producing lots of energy. The only thing I am sure about is that these folks haven't managed to do anything of the sort. There is absolutely nothing nontrivial happening at the nuclear level in their devices. It's a NiMH battery claimed to become copper. Moreover, they claim that a nuclear transmutation of grams or kilograms of rather heavy elements is healthy enough for you to have it at home.

They have no idea what they're talking about and the actual mechanism behind their profits is that their customers are even more ignorant about basic physics than the authors of this "technology" themselves. Too bad to find out that this appraisal holds for most WUWT readers as well.

You can't turn macroscopic amounts of nickel into copper in a safe tabletop experiment. Fusion is physically doable but at least for a short period of time, the relevant nuclei simply have to have the energy corresponding to the temperature of millions of degrees. If you wish, the fusion reactor must inevitably "borrow" a huge energy comparable to the energy produced at the end. This follows from the shape of the potential. In this sense, the very term "cold fusion" is an oxymoron.

You can't get cold fusion, OK? This is just like the perpetuum mobile devices. Mr Rossi probably is a scammer but he may also be an honest re-discoverer of an NiMH battery: he just incorrectly measured how much energy such a battery may produce.

See Cbullitt for some fresh yet historical memories about cold fusion - and a nice compliment. ;-)

By the way, if some people were observing some experiment where 50 cubic centimeters of a black box generated a very high amount of energy - kilowatthours - which can't occur chemically, well, then it is scam and there was either a secret extra conductor bringing extra energy or the energy was transmitted wirelessly. Some infrared radiation directed at the "reactor" would do.

Intel shows a light bulb shining in the air: the power is transmitted via electromagnetic waves, wirelessly. To transmit ordinary heat "wirelessly" is of course much easier.

I have made the same comment - either hidden wires or wireless power transmission - when I saw a video in which two burning candles power a light bulb or a motor etc.

I would never forget about the wireless possibility since ten years ago or so when I bought a rechargable toothbrush via ubid.com. The recharging occurs without any wires (which could be dangerous in a wet bathroom) - by electromagnetic waves.

It wasn't explained on the product so I was stunned - how it could recharge? :-) Of course, after some time - which wasn't limited, maybe hour, maybe even longer - I figured out what had to be going on. So then I could show the same trick e.g. to Prof Shiraz Minwalla who was equally shocked. How do the electrons get there through the plastic? :-)

Algorithm of the scam

In the likely case that this is a scam and the people behind it know what they're doing, I guess that both the Greek and the U.S. companies are parts of the scam - they are meant to be the role models that lure other investors - other companies ready to produce this stuff and pay license fees.

The money for licenses will only come from other, new companies. The license contracts will be constructed in such a way that the dysfunction of the full engines won't make the contracts invalid. Moreover, I believe that the October deadline will be ignored and new "tight schedules" will be promoted to new investors without admitting that the previous ones were missed.
Luboš Motl v 5:23 PM
Share