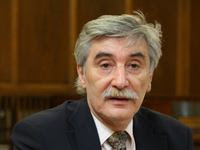 Mr Ladislav Bátora is a conservative man. In the past, he was a candidate in some elections backed by a nationalist party. In February 2011, he was supposed to become the deputy minister of education. A couple of politically correct Czechs started to scream.

President Václav Klaus defended Mr Bátora against the politically correct witch hunts. In that article, you may also learn about Bátora's opinions about many things in life, politics, and culture. You won't have doubts that he's more conservative than your humble correspondent, especially when it comes to music, food, and other things. ;-) He may also have a diametrically opposite opinion about Israel, and so on.

I agree with many things he says and disagree with others. But make no doubts about it: when I arrived to the Prague Castle on president's 70th birthday two months ago (well, I was running for a few miles in the heat, you know the story), I found it appropriate to shake his hand.


At any rate, Mr Bátora was ultimately employed by the ministry of education and the Czech PC activists didn't stop their hateful campaign attempting to suppress his freedom of speech. He has a "fascizing" influence on his environment, they claim.

It turned out that their main political platform is TOP09 (Tradition - Oh-responsibility - Prosperity 2009) - a new PC-style conservative party (probably the Czech party that is closest to the nominally conservative but otherwise centrist and politically correct parties in contemporary Western Europe) that was created when it separated from the Christian Democratic Union - Czechoslovak People's Party (yes, it's still called this way) in 2009.

Somewhat surprisingly, TOP09 remained the only pro-PC parliamentary party in the Czech Republic (to a large extent, this is true even on the left side of the political spectrum because there are simply not too many left-wing voters who like to be politically correct haha, so the social democracy must be very careful about these matters). In particular, the Czech minister of education who is backing Mr Bátora, his employee, is a politician for the Public Affairs (VV) party. So the VV - another new party that defines itself primarily as an anti-corruption populist party for the rich (especially in Prague) and owned by the millionaires - didn't really jump on the politically correct bandwagon. Some people used to say that the VV were pretty close to Klaus - but this was the first episode in which I noticed that they could have a point.

Recall that after the 2010 elections, the Czech government coalition is made out of 3 right-wing parties; ODS (Civic Democratic Party), the "main" right-wing party founded by Klaus in the early 1990s (but which largely separated from Klaus during his presidency) which has however lost its numerical dominance over other right-wing parties in recent years; TOP09; and VV. Their coalition was unified especially by the shared fiscal responsibility but there exist many kinds of tension.

When it comes to the anti-corruption fight, the other two parties don't consider VV to be a legitimate "leader" in this struggle and a VV politician may actually become the first one who is successfully charged with corruption in politics. ;-) And now we have the split on political correctness.

In their politically correct attitudes, TOP09 went so far that their ministers - which include foreign and finance ministers - decided to boycott the negotiations of the government about the budget of the Czech Republic. Just imagine that: because of an employee employed by a ministry controlled by the other parties who is far from the top political level and whom they don't like because they don't like the freedom of speech, they are ready to endanger one of the most important political discussions that the government has to go through every year.

Needless to say, Prime Minister Mr Petr Nečas denounced TOP09 for this petty attitude. This excuse is simply not enough to justify their absence on the budget negotiations. But TOP09 was partly successful and Mr Bátora was given a different, "less pundit-like" job - to take care of the property of the ministry of education or something like that - so the "scandal" may gradually evaporate.

Foreign minister Karl von Schwarzenberg - an aristocrat whom I otherwise kind of like(d) even though he is clearly a very different type of politician than Klaus - became a top enforcement official of the political correctness. He argued that Mr Bátora's being employed by the ministry of education is a "very important thing" and they're ready to do crazy things because of this important thing.

Well, if it really became a very important thing in Czech politics, then I think that Mr Schwarzenberg - who apparently isn't capable of working as a minister in a country where Mr Bátora is allowed to have a job - should be fired and gradually eliminated from politics (and forget about his plans to become Klaus's successor as the president). Maybe a centrist grand coalition with the social democrats could be a more productive kind of co-existence than one with a coalition partner who becomes dysfunctional in the absence of political correctness. Maybe when it comes to things that really matter, TOP09 is more left-wing and less pro-freedom than the social democracy. All these possible interpretations must be carefully thought about. After my scary years as junior faculty at Harvard, I know quite something about where it leads when individuals such as the feminist whores are allowed to exert this kind of non-standard, ideologically motivated influence upon things that are none of their business.

This is something that we cannot accept or tolerate in the Czech Republic and polls systematically show that a vast majority of the Czech citizens opposes this kind of political correctness that doesn't really differ much from the communists' harassment of the politically inconvenient individuals before the Velvet Revolution. After all, a majority in the polls explicitly backs Mr Bátora. So an unhinged minority of active proponents of political correctness shouldn't be allowed to gain this amazing power - to decide about the fate of people employed by ministries they don't control just because they want to assign themselves the monopoly to impose the political correctness in the society.

I am always amazed what these folks think about themselves. Even if I disagree with some opinions by Mr Bátora, it's very obvious that my political distance from him is comparable to my political distance from Mr Schwarzenberg. And I am actually confident that this is true for a vast majority of Czechs. So what is exactly the logic that would allow the likes of Mr Schwarzenberg to decide about the fate of people such as Mr Bátora? You don't have such a right, Mr Schwarzenberg. Such a right would be completely inconsistent with democracy.

Mr Bátora is clearly violating no law - if he does, try to sue him - and he enjoys the freedom of speech so if you have some problems with Mr Bátora's opinions, Mr Schwarzenberg, the right way to solve these problems is for you to visit your psychiatrist. The right way is not for you to play as if you were a new kind of Stalin who has the power to fire arbitrary people because of their inconvenient opinions.
Luboš Motl v 9:46 AM
Share