DOWNLOAD THE FULL PAPER (someone posted it on the Internet)

Let me add this CERN video - which is nice except that it doesn't mention the name of Henrik Svensmark or anything else that was actually critical for these experiments to be done - such as the actual theory that underlies them.

If you don't see any video above, go to this CERN press release or the page with the video. On Thursday, I spent lots of time by watching soccer and the related social activities. On Thursday morning, it turned out that there are many issues about the CLOUD experiment and the related reports that are just too distasteful for my stomach that can't deal with everything. But I have already quick-read the CLOUD article and other sources. You may already discuss about the topic here.


CERN has finally released some data generated during their tests of Henrik Svensmark's theory, the so-called CLOUD experiment. Jasper Kirkby's experiment has shown a clear impact of the cosmic rays on the formation of nanometer-sized aerosol particles: the cosmic rays enhance this key initial process roughly by an order of magnitude!

Those particles may grow to 2 nm.

However, the subsequent growth to 100 nm which is needed for the particles to be truly relevant for the birth of clouds remains ill-understood. It seems empirically obvious that this stage of the growth is possible but no one knows what process or feedback it should be blamed upon.

You're encouraged to add information in the comments: maybe this "detail" of cosmoclimatology is well-understood by someone - it's just not understood by your humble correspondent at this moment.

Let me just emphasize that this seemingly insufficient potential for growth of the large enough aerosol particles isn't a specific problem of Svensmark's theory: it is a hole in the theories pursued by anyone who actually tries to understand how the clouds are born. You could say that it is a gap in all the existing climate models, too. Additional chemical compounds could be the key - or something else. Because of this ignorance, the huge increase of the nanometer-sized aerosol cloud seeds can't be currently and directly translated, as far as I know, to a clear number indicating how much the cloud cover is affected by the cosmic ray flux. 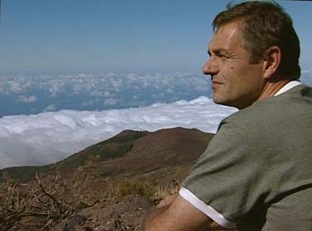 Henrik Svensmark, the biological father of cosmoclimatology and the experimenter behind the first experiments verifying its key mechanisms

The results from CLOUD may be new from many viewpoints, not-so-new from many other viewpoints, but despite the fact that Pilsen just eliminated Copenhagen from the Champions League and despite the fact that Pilsner Urquell is better than Carlsberg on their T-shirts ;-), I feel a clear unjustified anti-Danish accent in some of CERN's proclamations that I am surely not going to endorse in any way.

CERN has just run a supplementary experiment to quantify issues in Svensmark's theory so it should surely avoid all steps that are equivalent to planned stealing of the credit.

It's perhaps better not to comment on Nude Socialist's piece - which doesn't mention the name of Henrik Svensmark at all but does dedicate the whole first paragraph to crackpottery about Gaia and does consider the galactic cosmic rays to be "another human effect on the climate".

To keep my blog extremely polite, which is what all the readers are used to, I won't suggest what I think about these breathtakingly fuked-up sty assholes in Nude Socialist - they're just amazing.

I've seen the technical paper in Nature. It was submitted in 2010 and doesn't seem to be the state-of-the-art representation of their results. There are various relevant graphs etc. But I simply can't read this stuff because of the way how Svensmark is treated by them. The first reference is to an IPCC, the gang of immoral shieads who have been doing their best to delay and suppress the research of these inconvenient effects.

Svensmark's name only occurs once in the reference list and his experiments investigating the same thing are not even cited. Kirkby is a nasty jerk and I don't want to have anything to do with him now. The content of the paper seems to be politically manipulated as well. It's something I am sensitive to.

Among the disgusting reports in the media, Physics World still manages something that seems remotely tolerable: at least, it mentions Svensmark.
Luboš Motl v 1:22 PM
Share