The second largest city of Czechia, Brno, has already survived its first "gay pride" (even though it did lead to some battles). However, today's happening was the first time when the march came to the Czech capital. 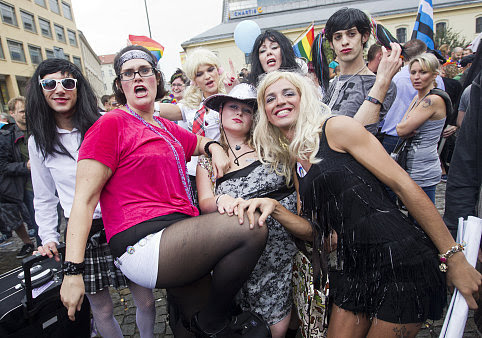 Czech President Václav Klaus's aide, Mr Petr Hájek - a creationist who also believes that bin Laden was a fiction created by the media - has criticized the march as a part of a movement that promotes deviations as virtues.

In particular, what has irritated him was that the mayor of Prague - who is nominally a conservative politician - has officially endorsed the parade.


Well, I also do think that this endorsement is kind of crazy from a conservative politician. The Czech society is arguably the most tolerant one in the world when it comes to gays and similar things - it's their business, not ours, everyone says, and no one really cares - but conservative politicians might still be expected not to actively promote exhibitionism of this kind.

One TV commercial inviting heterosexual women who feel like fat stupid cows to the "pride". Their problems so far are because they didn't have their own fag yet. Another TV ad invites male skinheads to find a new gay friend.

The expected groups - social democrats but also the Public Affairs, a junior party of the right-wing coalition - have criticized Mr Hájek and demanded that the president denounces his aide. Of course, Klaus rejected this request. He is not proud about the "gay pride", either. We should tolerate these minorities and respect them as humans but we shouldn't worship them. 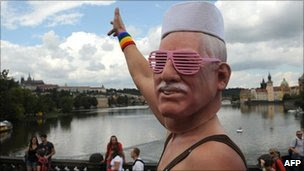 Of course, a mask of President Klaus couldn't be absent on the show. At least some (fake) symbol of decency over there. ;-) BBC has used the photograph as their logo of the event.

Meanwhile, 13 ambassadors of major Western countries (including the U.S.) have endorsed the parade as well: they may have been encouraged by Mr Hájek's opposition to do but maybe they would do it even without it. President Klaus has called their petition an unprecedented intervention into the internal political discussions in our country - something that the Czech ambassadors wouldn't ever dare to do in their host countries. He surely has a point.

Ex-tennis superstar Ms Martina Navrátilová who is lesbian were disappointed by Klaus' opinions:


"It is very disappointing for me to see these extremely homophobic and unenlightened remarks coming from a terrific and very worldly man. Unfortunately it seems President Klaus just doesn't get it... I hope one day we will hear words of support from Hradcany -that we didn't get that support under Soviet rule was a given,but now? Come on Mr. President- join the parade and see what we are all about!!!"

Today, Klaus also criticized ODS, the right-wing party he founded (but decoupled from recently), for its silence. This silence is helping the far right, Klaus says. And indeed, the Workers' Party of Social Justice (the name sounds nice, left-wing readers, doesn't it? Yes, it's our counterpart of NSDAP) is already trying to organize counter-marches etc.

Nightwork: Je Suis Gay [I Am Gay]. I can't find the English version now. The Czech original is called "Global Warming" because the "warm people" means "homosexual" in our mother tongue: it explains how everything in the Universe is getting warmer and even photosynthesis runs because of homosexuality. :-)

However, I am not surprised that ODS doesn't have a sharp opinion. It's just not a topic that ODS has been all about. It was about the free markets and freedom, not about social conservatism. In some sense, I think that even for President Klaus himself, social conservatism is a pretty new topic and focus. I don't claim that he wasn't socially conservative in the past; it just wasn't the most visible part of his personality. Meanwhile, some members of the Christian parties - that were a permanent part of Czech politics between 1989 and 2010 and that never showed too much Christianity in the public - are suddenly also trying, somewhat less violently, oppose the homosexual fest.

So make no mistake about it: the event is a huge source of controversy. It is totally legal and protected by the same standards as many other politically flavored events. At the same moment, the Czech police is ready to cancel the event if there are problems. That's how it should be.

There are many imperfect things about my homeland but the general situation when it comes to the rights of the gays is one of the things just are just OK. Everyone is tolerant but we seem to be totally immune against the crazy expansion of the political correctness in the West that has made it de facto mandatory in every single Western country to pay lip (and sometimes not only lip) service to homosexuals.

Klaus invented a new term, homosexualism, for the political movement fighting for special rights and status of the homosexuals. In his optics, it is analogous to feminism, humanrightism, environmentalism, its most radical form called climate alarmism, and many other degenerative and threatening -isms influencing the contemporary world.

Also, this sort of exhibitionism is more likely to be connected with gays than with heterosexuals. Still, it seems obvious to me that a majority of the Czech gays and lesbians don't feel the urge to participate in similar events (don't forget that there must be about 40,000 gays and lesbians in Prague) - and indeed, many of them said that the day of the "gay pride" is the first time of the year when they're ashamed that they're gays.

You may look at the picture at the top and ask the question: are those folks necessarily the people who should be proudly identified as the best friends of the conservative mayor of Prague or the U.S. ambassador? Does it really strengthen the dignity of Prague or the United States of America? I think that these officials have the right to express their inclinations; on the other hand, I am not sure whether these attitudes are genuine (or just a sign of hypocrisy) and I don't think that this helps to make them more appropriate people for their jobs that are expected to be connected with a certain kind of decency.

Here is an alternative opinion. This guy thinks that it's the greatest moment of the Czech history at least since the birth of Czechoslovakia in 1918. ;-)

BTW gay artists etc. are richly represented in the Czech society and especially arts. A recent example. Ms Aneta Langerová - see e.g. Sinful Bodies, Butterfly Wings and Living Water - won the first "American Idol" contest in Czechia (Czechia looks for its Superstar 2004): the winners were voted by the text messages from the nation; if I weren't in the U.S., I would send mine, too (she was just way too better than the runnerup). She only uncovered she was lesbian a few years later. I think it was a good decision to remain in the closet during the contest etc.: in this way, one may be sure that she won it because of the music and she didn't lose or win because of homophobia or compassion.

Two months ago, she was singing at the Rainbow Pride in the capital of Slovakia. A Slovak journalist asked her what she thinks about the idea that she's not a good role model for the youth. She modestly and politely said: I don't know what to say about it. But then he asked why she abuses her popularity to promote deviations and things outside the norm. She kindly answered that it was because she didn't think it was outside the norm. She has it herself in this way; everyone can. It's a normal life. "If two women are [...] with each other, is it normal life?" Yes. "Aren't you ashamed?" No. Clear, simple, and free of unnecessary exhibitionism.


OK, I don't want most of the TRF readers to end reading of this article in a gay mood. So here is a heterosexual song, "Love in a [Hamburger] Roll". Mr Xindl X, an Arab man, is going through a desert, sees a mirage (a woman), and ends in an apparently real local McDonald's with an attractive enough lady, Ms Olga Lounová.

So he considers buying a hamburger with things he doesn't really need, just to get closer to her.

The song may also be used as a textbook of Economics 101. The lyrics teaches us, among many other similar things, that the supply determines the demand. ;-) The musicians also present a pretty complete picture of the daily routine of the McDonald's employees as well as the summary of different sizes of the products, including Super Size hamburgers.

His excitement about her drops at the end, when he's approaching the counter, but it still seems to be nonzero. Nevertheless, she decides not to accept his order. ;-)

Today, Ctirad Mašín [tstyi-rut machine], one of the Mašín brothers (the older one) who defeated 10,000+ Czech and East German cops and Soviet soldiers and managed to shoot their way to freedom into West Berlin in the 1950s, died.

The brothers continue to divide the Czech society. The current Czech prime minister, Mr Petr Nečas, called the brothers "national treasure" today. In this sense, he's equivalent to his predecessor Mr Mirek Tolánek who gave them the order of the Czech PM. President Klaus is among the less enthusiastic supporters. ;-)

The 8th part "Fear" of the 30-episode communist TV blockbuster, "30 missions of Mjr Zeman", which is still popular these days (!!!), was dedicated to a propagandistic description of the activities of the group of Mašín brothers. Mjr Zeman was an officer in the communist state secret police - our KGB - celebrated as a hero by the soap opera.

In the communist movie, the brothers and their friend are ultimately captured by the communist police - unlike in the reality. ;-)
Luboš Motl v 6:05 PM
Share