Once you convert the HadCRUT3 raw data into a format you can deal with - using a programming language that is able to compute things - it is straightforward to draw various graphs.

A few days ago, I calculated the warming trends as seen at various stations among the 5,000 stations - and during individual months (Januaries only, Februaries only, and so on). It turned out that the warming trend hugely depends on the station: it is 0.75 plus minus 2.35 °C per century or so. The warming hasn't been "global".

Let's draw some more elementary maps. Click at any map to zoom it in. 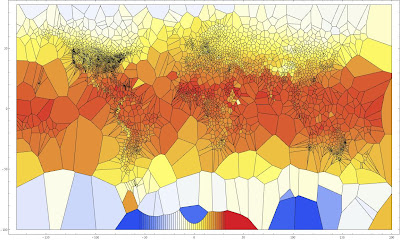 Note that the blue-yellow boundary is close to -10 °C or so.


The annual mean temperatures range from -55 °C somewhere in the Antarctica to +31 °C somewhere near the equator - sorry, I haven't looked at the precise location. The width of this interval is 86 °C. That's quite an interval. Compare it with the statements that a change by 1 °C is supposed to be almost deadly for most regions in the world. It's just silly. A uniform warming of the Earth by 80 °C would evaporate the oceans at various places :-) but it would still yield very pleasant temperature in the Antarctica.

Now, let us look at the seasonal variability. Let's plot the difference between the warmest month and the coldest month (averages over the whole record) at each place. 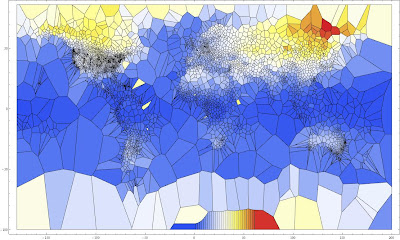 The maximum difference is achieved in Northeastern Russia - it is 63 °C or so. Imagine: the average July temperatures are 63 °C warmer than the average January temperatures. Again, the notion that a change of either temperature by 1 °C would threaten them is amusing.

If you look at the image above, it's also obvious that the continents see greater seasonal temperature oscillations (lighter colors than dark blue if not straight yellow/orange/red) than the seas (and islands). This rule of course becomes invisible near the equator where the temperatures don't change too much during the year even if you're sitting at a continent.

The map above also makes some defects in the dataset very manifest. There are regions where the color is discontinuous, obviously meaning that something is wrong with the data at the station. For example, you see that something is wrong with the triangle I call the "Bermuda Triangle". You surely see which place I mean even though the actual Bermuda Triangle is located more to the West, touches Florida, and its "arrow" is pointing in the opposite direction. :-)

There are also defective stations - or stations that don't have a single complete year (I haven't studied the detailed character of the defects) - to the East from the U.S. East Coast.; near the Northeastern beaches of the South America; on the Eastern coast of Africa, and a few extra defective slivers you may surely find yourself.

I have no idea what HadCRUT3 is doing with all those things but they may be detected, isolated, and I am pretty sure that even if you filter the data in the most obvious way - e.g. if you eliminate stations yielding a trend outside a sensible interval - those 10 stations or so won't affect your global averages. There could be about 10-20 more stations whose defects are comparably important but not "obvious" on the map above. That would still be a tiny fraction that wouldn't change the global averages in a substantial way. Note that we deal with 5,000+ stations.

Jeddah, Saudi Arabia, submitted no data and is omitted on all of my maps.

You may also draw the map of the difference between the warmest and coldest month (averages are computed for each of the 12 months) including the sign (I chose the sign telling you whether January is warmer than July) and you get this map: 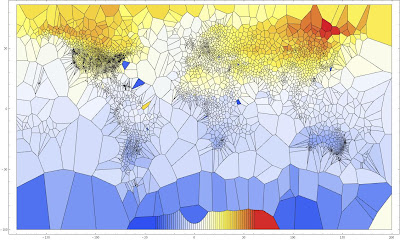 It's not too hard to find the manifestly bad apples among the 5,113 stations. First, station 863 (in the 1-5,113 numbering), Jeddah in Saudi Arabia, has no data. So only 5,112 stations submitted some temperature data.

Then there are 16 additional stations that don't have the valid longitude (+199.9 means missing) or latitude (-99.9 means missing). It would probably not be hard to find the locations of all of them, using the names. (Too bad that these simple holes couldn't be fixed e.g. by the meteorologists in the local countries.) For example, Serra do Pilar, Portugal (a castle) has coordinates 41-08 N and 8-36 W.

The other worst offenders among the stations are those that differ most from the 4 geographically nearby stations - except for the very worst among them which could be a bad apple itself. ;-) It turns out that there are many stations that don't even have a full year of data - there is at least one month of the year (usually several) for which there is no known temperature from any year. For those stations, you can't really determine any annual mean temperature because of the missing months.