Higgs search: neither fish nor fowl

My "live report" from Lepton-Photon 2011 in Bombay ended up being somewhat unreadable, missing the big picture: that's what often happens with texts in which you don't know in advance what the final product will look like.

So let me summarize: the LHC has still found no evidence for any new physics or any Higgs and the previous hints for a 140 GeV Higgs boson that we had in July have actually weakened. If you assume that the Higgs sector is governed by the Standard Model, this graph by Phil Gibbs shows our "neither fish nor fowl" situation pretty clearly. 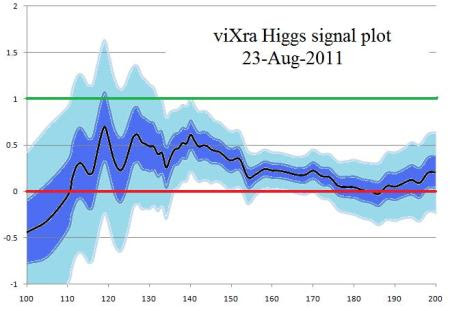 By the way, the proper saying should be "neither fish nor crayfish" ("ani ryba ani rak" in Czech) but the Englishmen probably failed to distinguish poultry and crayfish.

The red line "0" means "predictions of a theory without any Higgs" while the green line "1" means "predictions of a theory with a SM Higgs boson of the mass given on the \(x\)-axis". The key question is whether the observed black curve is closer to the red line (no Higgs) or the green line (one Higgs). The error margins, plus minus 1 and 2 standard deviations, are given by the dark blue and light blue strips, respectively.


I kind of trust that these graphs are close to the correct ones even if Phil doesn't quite know why his calculation is right. He's a data-driven neural network that's been trained to mimic the official CERN graphs. In fact, Jester has an explanation why they didn't show the combined ATLAS+CMS graphs in Bombay: they could easily turn out to be identical to those previously drawn by Phil and named "complete nonsense" by some official figures at CERN. ;-)

Maybe even an agreement with my graphs would be embarrassing enough for them.

At any rate, see that above the Higgs of 150 GeV or below 115 GeV or so, the black curve is close to the red line - within 2 sigma - so the observations are consistent with the hypothesis "there's no Higgs of this mass". However, for the intermediate masses, you're somewhere in between the red line and the green line.

The observations seem to be so nicely in between that they seem to falsify both "Yes Higgs" and "No Higgs" for the whole interval of masses 135-150 GeV or so at the 2-sigma level. ;-) This would be unlikely to happen if the Standard Model were actually the whole story. So a very sensible explanation is that the Standard Model is actually not the full story.

By the way, the error margins are larger near 119 GeV - my favorite place of the "main" Higgs boson according to the newest graphs - and the existence of a 119 GeV Higgs is consistent with all measurements as of today. While the behavior of the graph near 119 GeV could be consistent with a non-supersymmetric Standard Model Higgs at 119 GeV, the "half-signal" near 140 GeV seems strange.

So I would say that according to similar graphs, it's more likely than not that the Standard Model is not the full story. At the same moment, convincing or "direct" evidence for new physics is still absent. This is a funny intermediate situation that will almost certainly change in a year or a few years.

There's one point that's worth mentioning. Many people have argued that supersymmetry or some other new physics had to be behind the corner, and so on. I've always emphasized that there was no good evidence for this belief. There's no new physics in the LHC data so far - and in fact, it seems that the LHC has refuted pretty much all anomalies previously claimed by the Tevatron. I don't think that this means that the LHC will not discover SUSY - or anything else which is new.

Because the LHC reach continues to increase nearly exponentially and because new physics may be imagined to be uniformly distributed on the log scale (when it comes to increasing particle masses as well as correspondingly decreasing cross sections), the LHC still has the same "probability per unit time of running" to make a new discovery.

However, it's funny to observe people like Jester who have thought that the "long time" it clearly takes to discover SUSY means that SUSY is very unlikely. Jester himself obviously believes that there is a Higgs boson - and he probably believes that it should be a Standard Model Higgs boson - but he is starting to see that the same arguments he has used against SUSY start to hold for the Higgs boson itself.

Jester says that the God particle is apparently trying to maximize the difficulty of discovering it - so God is rather Loki than Thor. Well, does it mean that something is truly unnatural if the Higgs takes so much effort to be found relatively to all other particles we know? And what about if you replace "Higgs" by "SUSY"?

I don't think that there's any contradiction. We just know that among all the particles we have already observed plus the Higgs, the Higgs is the hardest one to be found. If the hardest (or heaviest or last) particle were anything else than the Higgs, like a lepton (tau?), we could be equally "puzzled" why it's exactly this particle. But one particle has to be the least accessible one! In fact, it's very natural for this "hardest particle" to be the Higgs because other particles' masses are just "traces" of the power of the God particle, so they're naturally smaller (a fact that is obvious for light fermions because of the tiny Yukawa couplings).

What the experiments show is really not the absolute statement that "Higgs is very hard to be found" or "SUSY is very hard to be found". What we see is the relative statement "Higgs is harder to be found than the typical expectations" and similarly for SUSY. So it's necessary to realize that what we're doing is a comparison with the expectations. The experiments simply show that the expectations (and "gut feelings") by many people have been wrong. If you phrase it in this way, it's not too shocking and it's surely no contradiction.

Superpartners may have masses a few TeV or so and SUSY would still play an important role in solving "most" of the hierarchy problem, producing a dark matter particle, and assuring the gauge coupling unification. If SUSY is helpful for stabilizing the Higgs sector, it doesn't mean that its superpartner scale must be "exactly the same" scale as the Higgs scale.

Similarly for the Higgs: more complicated models of the Higgs may easily make the Higgs more secretive than it is in the Standard Model. Just imagine a simple model. Instead of one Higgs doublet, you have \(N\) Higgs doublets
\[H_1, H_2, \dots , H_N.\] Imagine that all of them get the same vev. The squared masses of W-bosons and Z-bosons, i.e. the coefficients in the \(m^2 A_\mu A^\mu / 2\) mass terms for the gauge bosons, are arising from \(\sum_i D_\mu H_i D^\mu H_i / 2\) and are proportional to \(v^2\) where \(v\) is the vev of each Higgs doublet.

This means that if you replace a single Higgs by \(N\) of them, the probability of the Higgs production is simply "divided equally" between all the Higgses. So all the production cross sections become smaller - the bumps are diluted and distributed over various places. The width of each of them may become a little bit smaller, too: it's because there may be extra Yukawa vertices for the Higgs decay.

So it's easy to get "half-signals" for many Higgses. In more realistic situations, the numerous Higgses don't play the same role. Some of them like to couple to some kinds of fermions; others like to couple to other fermions, and so on. Many particular cross sections may diminish; and some cross sections may also get amplified - e.g. the down-type Higgs boson in MSSM that has a smaller vev (because it wants to produce a smaller bottom quark mass) but a higher Yukawa coupling than the SM Higgs boson. That's the origin of the enhancement of the \(bbb\)-related processes by \(\tan^2\beta\).

Chances are high that what we have to find is a more complicated model with many Higgses or new physics and of course, we shouldn't be shocked that one needs more data to do find more information. However, if you imagined that we exactly knew what the model is except for one parameter, the value of the parameter could probably be determined from the data we already have (by drawing suggestive combined graphs - and we don't know which graphs they should be) - much like what would be true about the Standard Model Higgs if the Standard Model were right (people kind of expected that this could already be found by now).

The odds are increasing that we have to wait for a longer time - but what we will ultimately find may also be a greater trove of jewels than the minimum we were hoping for. Because nothing new seems to display itself clearly in 2/fb of the data, it's pretty clear that we have to wait for something like 10/fb of data to get some clear 5-sigma discoveries of something.

Even if those 10/fb are obtained by combining 5/fb from each major detector, it's pretty clear that we won't get clear discoveries before the end of 2011. In 2012, it's a totally different question. In 2012, we will either discover the SM Higgs or will have a clear evidence that the SM isn't the right theory or the full story.
Luboš Motl v 8:07 AM
Share