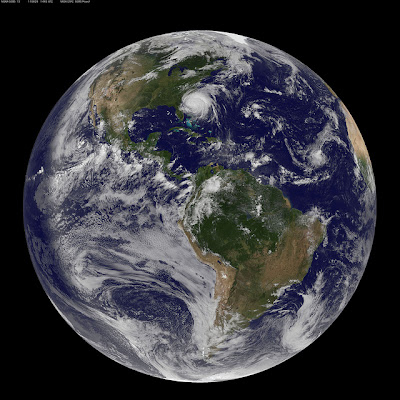 NASA's GISS picture of the Earth on August 27th. Can you find Irene? Click to zoom in. Via Andrew Revkin

Google News coughs up 117,000 articles in English with the phrase "hurricane Irene" in them. That's something like 2,500 article per casualty. Wow.


Get Real: Hurricane Irene Should Be Renamed "Hurricane Hype"

It also included the sentence


It is doubtful that Irene will even cough up eight bodies.

which was an underestimate by a factor of six and WUWT found it insensitive enough so that Pat Michaels was placed right next to Al Gore who said that climate skeptics will be viewed on par with racists (such as Gore's father). ;-)


One has to be a native speaker to naturally use "cough up" (without copying the phrase haha) and Michaels' phrase is surely tough - much like Mother Nature is - but I do agree with Michaels' basic point while Watts' reaction looks like a kind of populism to me. Michaels may have underestimated the casualties by a factor of six but the media have overhyped the severity of the event by a factor of 100 or more.

Michaels ultimately apologized for the tough wording but I wouldn't say that the apology was quite his free decision. You know, death is sad but this selective worshiping of hurricanes' casualties is just irrational religion. Every year, 57 million people die. Cardiovascular diseases, cancer, car accidents, and many other events are the causes. Are those deaths less tragic? Are the human lives they end less valuable? Why does Hurricane Irene that kills less than 1 part per million of the annual deaths in the world get this special treatment? Or should there be 117 trillion articles a year about the people who died during the same period of time?

Pat Michaels mentions that the tornado warnings are issued almost constantly so their price has dropped accordingly. No doubt about it. And the amount of hype about Hurricane Irene in the U.S. media has just been amazing. This is a normal minimal major hurricane - about two or three of them (and sometimes many more) take place every average season. Do we really need 500,000 articles in English about major Atlantic hurricanes each year? It's just some circular wind and rain. It's weather.

There are lots of redundant people (and the number keeps on increasing) employed in the media and this is how they make sure that they have "work". They overhype every event that is easy to be overhyped and for which they need no special knowledge or skills.

Several years ago, I remember that there was a hurricane or at least a tropical storm that also reached Massachusetts. At least that's what all the media were writing at that time. Isn't it fantastic? Meanwhile, what I observed in Boston was some ordinary rain with some moderate winds. Of course, I forgot what the name of the storm was and I don't find it important enough so that I would look up what the name was. I was thinking - and I am still thinking: WTF?

What I find obvious and essential about the media reports is that they don't really depend on the severity of the actual events. The 2011 Japan earthquake and tsunami have killed 16,000 people which is 340 times more than hurricane Irene but the amount of global media attention is pretty much the same. Why? Where does the constancy, the media's quantitative independence of the reality, come from?

Well, it boils down to the constancy of the journalists' salaries. All those redundant writers are paid pretty much constant salaries and they think that their job is to produce a certain amount of hype per month so they do it whether or not something serious is going on. This is the basic mechanism that makes it necessary for every intelligent reader to completely disregard all the emotions and big words that are hiding in newspaper articles (and yes, sorry to say, at WUWT as well): they have almost nothing to do with the reality. You must only extract the barest facts out of the newspapers, hoping that most of them are correct. But if you start to adopt interpretations or attitudes, you're screwed: you inevitably end up as a brainwashed and misled simpleton.

A few weeks ago, I watched the movie called Idiocracy: I think that Honza recommended me to watch it. Most science-fiction movie present a very sophisticated future with intelligent people. This movie took a different perspective - that the mankind will become stupider and stupider. There are lots of reasons why you could think that this is a more realistic projection about the future. The reactions of the viewers and readers in Idiocracy of the year 2500 don't differ too much from the present ones. Maybe it's because 2011 is substantially closer to 2500 than 2006 is.

Just to add some numbers. Here are the total numbers of fatalities of the Atlantic hurricane seasons from 2001:
You see that the numbers are highly variable and the year 2011 is so far well below the average year. You know, this issue is not only about the question whether a substantial part of the hurricanes are man-made which seems to contradict the empirical data and may probably be classified as a ludicrous conspiracy theory. It's about a much more general problem - the overreaction to many things.

It's not too much time ago when 120,000 people would die somewhere and there wouldn't be a single article about it. Today, we have 50- people dying in bad weather and there are 120,000 articles about it. Does it mean that the value of a human life is so much higher today? Or does it mean that we live in a virtual reality?

In the text above, I explained the basic reason why this distortion of the reality occurs: journalists think that their job is to produce a fixed amount of hype per month, regardless of the reality. And many people are so stupid that they just believe the media. I constantly meet people who justify their insane proclamations by the comment that they had seen them somewhere in the media. Is that really enough for them? It follows that their opinions and emotions don't have much to do with the reality, either. The population is stupider and stupider and we're approaching Idiocracy.

Can this trend be fought against? Should it be fought against? If it can and should, what's your recipe? How would you guarantee that the journalists and their newspapers don't starve to death as soon as after the first month without big catastrophes? Or should they starve?
Luboš Motl v 8:43 PM
Share