Nir Shaviv: The CLOUD is clearing 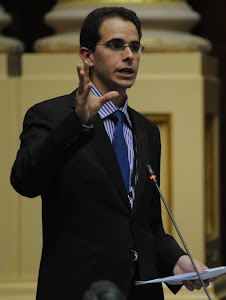 The CLOUD collaboration from CERN finally had their results published in Nature (TRF, full PDF), showing that ionization increases the nucleation rate of condensation nuclei. The results are very beautiful and they demonstrate, yet again, how cosmic rays (which govern the amount of atmospheric ionization) can in principle have an effect on climate.

What do I mean? First, it is well known that solar variability has a large effect on climate. In fact, the effect can be quantified and shown to be 6 to 7 times larger than one could naively expect from just changes in the total solar irradiance. This was shown by using the oceans as a huge calorimeter (e.g., as described here). Namely, an amplification mechanism must be operating.

One mechanism which was suggested, and which now has ample evidence supporting it, is that of solar modulation of the cosmic ray flux (CRF), known to govern the amount of atmospheric ionization. This in turn modifies the formation of cloud condensation nuclei, thereby changing the cloud characteristics (e.g. their reflectivity and lifetime). For a few year old summary, take a look here.


So, how do we know that this mechanism is necessarily working? Well, we know that cosmic rays have a climatic effect because of clear correlations between unique cosmic ray flux variations and different climate variability. One nice example (and not because I discovered it

) is the link between cosmic ray flux variations over geological times scales (caused by spiral arm passages) and the appearance of glaciations (more about it here). We also know empirically that the effect of the cosmic rays is through the tampering in the properties of cloud. This is through the study of Forbush decreases which are several day long decreases in the galactic cosmic ray flux reaching the Earth. Following such events, one clearly sees a change in the aerosol and cloud properties (more about it here).

Well, the new results just published in nature by Kirkby and company are the results of the CLOUD experiment. This experiment mimics the conditions found in the atmosphere (i.e. air, water vapor, and trace gasses, such as sulfuric acid and ammonia). It is a repeat of the Danish SKY experiment carried out by Henrik Svensmark and his colleagues (e.g., read about it here), and it produces the same results—namely, they show that an increase in the rate of atmospheric ionization increases the formation rate of condensation nuclei. The only difference is that the CLOUD experiment with its considerably higher budget, has a better control on the different setup parameters. Moreover, those parameters can be measured over a wider range. This allows the CLOUD experiment to more vividly see the effect.

The results can be seen in this graph (click it to zoom in): 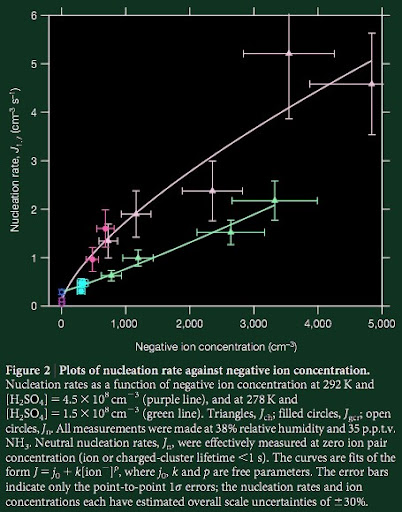 What does it mean?

The first thing to know is that when 100% humidity is reached in pure air, clouds don't form just like that. This is because there is an energy barrier for the droplets to form. To get over this barrier, the water vapor condenses on small particles called cloud condensation nuclei (CCNs). Some of these CCNs can be naturally occurring particles, such as dust, biologically produced particles, pollution or sea salts. However, over a large part of the globe, most of the CCNs have to be grown from basic constituents, in particular, clusters of sulfuric acid and water molecules. As the CLOUD and SKY experiments demonstrate, the ionization helps stabilize the clusters, such that they can more readily grow to become stable "condensation nuclei" (CNs). These CNs can later coalesce to become the CCNs upon which water vapor can condense.

Moreover, the number density of CCNs can clearly have an effect on different cloud properties. This can be readily seen by googling "Ship Tracks" where more CCNs (in the form of exhaust particles) serve as extra CCNs (you can also read about it here). It should be stressed that although the results are extremely impressive (it is a hard measurement because of the very precise control over the conditions which it requires), they are not new, just a formidable improvement. This implies that anyone who chose to ignore all the evidence linking solar activity, through cosmic ray flux modulation, to climate change, and the evidence demonstrating that the link can be naturally explained as ion induced nucleation, will continue to do so now. For example, you will hear the Real Climate guys downplaying it as much as possible.

Ok, so what do these results imply?

The first point was essentially pointed above. The results unequivocally demonstrate that atmospheric ionization can very easily affect the formation of condensation nuclei (CNs). Since many regions of earth are devoid of natural sources for CCNs (e.g. dust), the CCNs have to grow from the smaller CNs, hence, the CCN density will naturally be affected by the ionization, and therefore, the cosmic ray flux. This implies that ion induced nucleation is the most natural explanation linking between observed cosmic ray flux variations and climate. It has both empirical and beautiful experimental results to support it.

Second, given that the cosmic ray flux climate link can naturally be explained, the often heard "no proven mechanism and therefore it should be dismissed" argument should be tucked safely away. In fact, given the laboratory evidence, it should have been considered strange if there were no empirical CRF/climate links!

Last, given that the CRF/climate link is alive and kicking, it naturally explains the large solar/climate links. As a consequence, anyone trying to understand past (and future) climate change must consider the whole effect that the sun has on climate, not just the relatively small variations in the total irradiance (which is the only solar influence most modelers consider). This in turn implies (and I will write about it in the near future), that some of the 20th century warming should be attributed to the sun, and that the climate sensitivity is on the low side (around 1 deg increase per CO2 doubling).

Oh, and of course kudos to Jasper Kirkby and friends!

You may also watch a 30-minute lecture on cosmoclimatology by Prof Nir Shaviv he gave in Berlin in December 2010.
Luboš Motl v 9:57 PM
Share