Just to be sure that Standard & Poor's is not a grumpy agency that sees everything through pessimist's glasses, the agency has upgraded two key ratings for the Czech Republic by two notches today.

But of course, the capital of Czechia isn't Prague today. It's Pilsen. A big part of the nation talks about my hometown; the radio stations have special polls in which they ask the people when they visited Pilsen for the last time, and so on.


Pilsen needs to lose at most by two goals - e.g. 0-to-2 is still OK - in the second match against FCK Copenhagen. The match takes place in Prague's Eden Stadium (which belongs to Slavia Prague) and this place will be full. With 20,000 viewers (most of which come from Pilsen, by 100 buses, 11-wagon train funded by the regional politicians, and in a thousand of cars), it will host a higher number of Pilsner fans than the Pilsner stadium has ever hosted. ;-) The rest of us will watch in front of various TV screens, often in big social groups.

No one has noticed that the nameday is celebrated by Bartholoměj's today - even in the countries where namedays are not celebrated, it's the St Bartholomew day. This apostle's name is pretty archaic but there's one thing associated with this name. 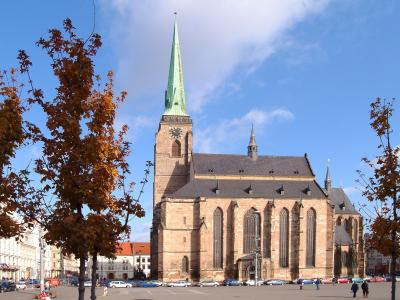 The most well-known St Bartholomew Cathedral is in Pilsen. At the central square (Square of the Republic), it has the highest tower in Central Europe (except for Germany): 102.26 meters. A little bit of superstitions shouldn't hurt: this coincidence should help. ;-)

If Pilsen wins the match or loses just a little bit, it will join the group stage of the UEFA Champions League (the third Czech and first Czech non-Prague team to achieve this thing) and about EUR 10 million will be added to the soccer club's banking account - that's equal to its budget for 3 years. Less than one year ago, insolvency proceedings began against FC Viktoria Pilsen because of some EUR 20 thousand debt.

It sounds almost like Bach etc. but the Champions League theme song was composed by a British composer in the 1990s.

Unless the players screw the match badly, this is unlikely to be repeated in coming years. :-)

It worked, 2-to-1, Pilsen won. The first goal was scored by the Danes. Our second and last goal occurred in the 93rd minute. Pilsen is the first non-Prague Czech team in the Champions League! ;-)
Luboš Motl v 6:17 PM
Share