Sharks join aliens in their bloody fight against AGW

Yesterday, we learned that Al Gore's extraterrestrial environmentalist pals are preparing a friendly but lethal attack against the Earth in which they will annihilate us. 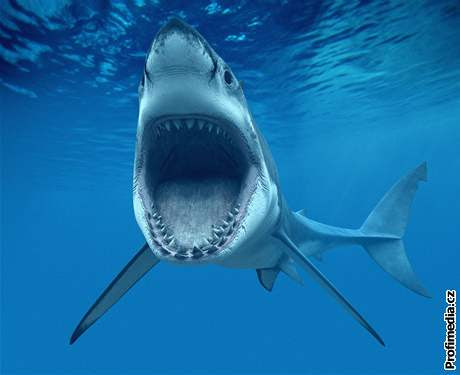 Some heretics have expressed doubts about the aliens' capacity to resuscitate the Kyoto protocols and cap-and-trade bills. However, during the last 24 hours, aliens have built a broader coalition - The Axis of Blood and Gore - that has started the war on humans, the main culprits responsible for the global warming in the Milky Way.

As AFP and Discovery News tell us today,


Humans may be to blame for shark attacks
Air travel, overfishing and global warming are all seen as contributing to the uptick in shark attacks.

Much like the little green men, sharks are also carefully observing the concentration of CO2 in the atmosphere. It goes up by nearly 2 ppm every year so the sharks determined that the rise of CO2 is due to humans, it could cause global warming, and they decided to increase their attacks against the humans. Sharks are smart enough not to be fooled by the constant or dropping temperatures of the seawater. They know that global warming is real despite the non-increasing temperatures. The consensus is stronger than any thermometers: 197% of the experts agree that the global warming doomsday is coming.

Every good environmentalist should support our friends sharks so that they kill as many CO2 emitters - especially the pilots, CEOs of Big Oil companies, and fishers - as possible.


Let me offer you an alternative explanation. The sharks are already fed up with the global warming fearmongers who are jumping on them several times a day. ;-)

For those of us who haven't watched all American TV soap operas, here is the scene in which Fonzie jumps the shark. To be honest, I find his achievement unspectacular (I could do it as well!) in comparison with the things that Nature and aliens are able to do because of millikelvins of warming according to the proponents of the global warming alarm.

In particular, I was disappointed that he just jumped over the shark. He was just jumping on the water ski - the only thing he needed was to be certain enough that the length of the jump will be either safely larger or safely smaller than a critical interval. ;-)

I thought he would actually land on the shark. Jumping over the shark seems unremarkable to me. The TV data also show that the show where the jumping over the shark occurred didn't start to decline at that point. This very episode was very successful and so were many episodes that followed.

However, as I suggested, the global warming fearmongers have already done more spectacular things than jumping over the sharks. They have teamed up with extraterrestrial aliens and detonated children with a mysterious red button. They have tattooed their opponents and organized Nuremberg trials against them. They have even promised to live in the reality for whopping 24 hours next month.

They have done many other things, including 862 achievements on this short list. ;-) For those reasons, alarmists' deeds are more similar to this story what would happen if Fonzie didn't jump the shark:


By the way, jumping over the shark is not much harder than parachuting that I tried 2 years ago with film director Ms T.N. Today, her ex-BF, sculptor Mr D.Č., crashed a glider and save his life with a parachute.