Update: Anthony is telling me that a story about the Tucker cars at the end of his blog entry shows that he reposted the report about the thorium cars as a kind of satire, and I kind of believe him after some e-mail exchanges, even though I am sure that he understands that it was very likely for me (and others) to miss this "detail". ;-)


Anthony Watts' blog has become the world's most progressive website that promotes alternative, carbon-free energy sources of the future. And when I say "alternative", I mean really, really alternative! :-)

Ford Nucleon, a 1958 prototype, an inspiration for the project discussed below

After Andrea Rossi's cold fusion, we learn about a new breakthrough:


Hey – how much Thorium you got under the hood? (WUWT)
U.S. Researcher Preparing Prototype Cars Powered by Heavy-Metal Thorium (Wards Auto)
Google News (about eight articles)

I really don't understand how a person with some basic knowledge of physics could buy the content of the article.


Thorium is arguably a nuclear fuel of the future - and China may actually be a leader in this promising technology that may cover the mankind's energy needs for thousands of years once it works. But thorium is still a heavy, radioactive element: a nuclear fuel. It produces all kinds of instantly deadly radioactive stuff. The idea that you would be "recharging" your thorium motor in the garage is just preposterous. It's like having a bath in the Fukushima (or any other) reactor.

Even in the far future when small thorium reactors are technologically possible, no sane countries would allow random people to manipulate with radioactive fuel at home. The thorium cycle produces a smaller - but still large - amount of radioactive products than the uranium cycle; on the other hand, it produces lots of hard gamma rays. You surely need to surround such a reactor by tens of tons of lead or a similar metal to achieve your basic protection.

Equally preposterous is the idea that the thorium could produce heat just because of "pressure" applied upon its atoms. I could repeat the explanation from the cold fusion article: the state of the atoms is totally irrelevant because it only changes the energy by electronvots while nuclear processes require either megaelectronvolts to overcome the Coulomb barrier between charged nuclei (including protons) during fusion, or they need a supercritical production of neutrons that can cause fission of heavy nuclei. Fusion needs huge tempratures; fission needs a constant inflow of neutrons.

In any thorium nuclear reactor, you first need neutrons to be absorbed by "fertile" thorium-232 nuclei (which are not "fissile") for them to become uranium-233 (which is "fissile"). The neutrons can't be replaced by gasoline or pressure or prayers. Atomic physics, chemistry, the writers' self-evident inability to distinguish thorium oxide from metallic thorium, or pressure of any ordinary magnitude are just totally irrelevant for the question whether fission will take place.

So this machine won't work and it couldn't possibly be safe for individuals: I am not talking about safety against the production of nuclear weapons, I am talking about ordinary public health and public hazard safety. But there are many other totally absurd statements in the Wards Auto article that must make every scientifically literate person instantly sure that the article is nonsense.

For example, the article promises a 227-kilogram unit that may be incorporated into your car. It should produce 250 MW - megawatts - of energy. That's not bad at all. Why? 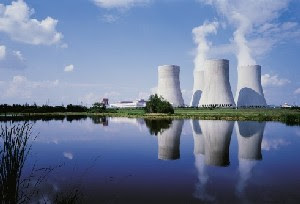 This is our Temelín nuclear power plant and it has two blocks with 1,000 MW each - in total, it produces 2,000 MW of energy when both blocks are running.

So the whole power plant above is equivalent to 8 of the miraculous thorium cars - about one 2-ton gadget. ;-) Temelín with its 2,000 MW gives us about 14% of the energy needs of the Czech Republic - which has 10 million people. You see that the 14 GW capacity corresponds to 10 million people, so 0.25 GW corresponds to 56 times fewer, about 180,000 people.

It follows that one of those miraculous thorium cars is exactly enough to feed the city of Pilsen with energy. ;-) Maybe such a car will have a little bit too much power to accompany your family on the road...

Or just think how you could extract the energy/heat from your motor. The vaporization heat of water is 2.23 MJ per kilogram. So 250 MW will evaporate about 110 liters of water every second. Where will your car get this much water? (Note that it's a hard task for the same reason as discussed above: what you have isn't a real car, it's 1/8 of the Temelín power plant.)

I must happily admit that this time, the WUWT readers weren't naive. The rating is just 4 stars, and not 5 stars, and most of the comments are skeptical. By the way, just like I predicted, Anthony Watts' promotion of cold fusion wasn't criticized or humiliated by a single alarmist blog. It's because despite some embarrassing flaws at Anthony Watts' blog, he's still orders of magnitude more realistic and educated about possible energy sources than the typical alarmists - who are complete nuts.
Luboš Motl v 10:52 PM
Share