Mrs Simona Monyová (44) was the most successful Czech author of romance novels.


Nicknamed "Viewegh in the skirts", after a bestselling male author, she has been a compulsive writer since her childhood. She would write 2 novels a year - the total number was 24. 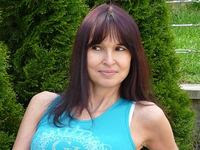 Today, she was found murdered at home. It's devastating for her readers and others.

You may employ yourself as a detective and try to guess who is the murderer. In 2008, she said in an interview:


...I am a big fan of sincerity and it has never been my goal to be liked by everyone.

You are publishing your books yourself which is unusual in our corners of the world. What has led you to this decision?

The books are not being published by me but by my husband - which is almost irrelevant because we closely collaborate. I convinced my husband to make this decision about six years ago. The only reason was my dissatisfaction with the previous publishers. Now I am totally satisfied!


So who is the killer who stabbed her to death? Well, yes, it was her husband. Sad.
Luboš Motl v 6:55 AM
Share