Over 20,000 people made homeless, replaced by carbon sinks in fight against AGW

People often talk about colonial masters, capitalists, and politicians as the sources of evil and inhuman acts. But most of us are not told that such things are happening today and their culprits are sometimes the same people who paint themselves as symbols of morality in the Western societies.


Armed individuals acting on behalf of the "New Forests Company" trying to earn carbon credits – which are being routinely changed to cash through fraudulent schemes in many countries of the world – came to a village in Uganda, shot a couple of children, and flattened the village. If you have the nerves, read the article to see details.


The inhuman acts are pretty much isomorphic to what the Nazis did in the Czech lands in 1942 after the blonde beast of Prague, Reinhard Heydrich, also known as the Hangman, was rightfully executed in the Czech capital by the Czechoslovak government in London. His Nazi colleagues started a wave of terror in which two villages, Lidice and Ležáky, were flattened.

Those people in the 1940s defending their perverse Nazi ideals. Their heirs in 2011 are only protecting their dirty profits and the anti-human propaganda that makes them possible. I urge all people who have some power to look into this business, to investigate, and if the reports are confirmed, do everything they can to execute the people driving and benefiting from this carbon-neutral genocide. 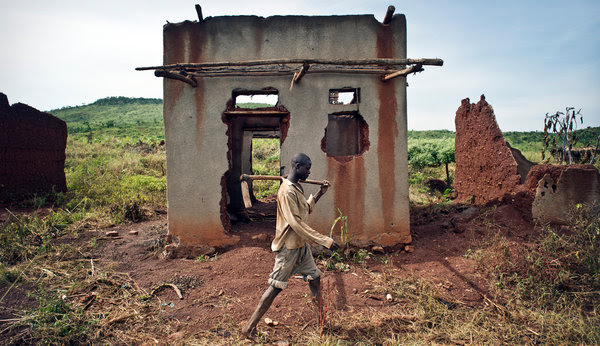 I have some indirect reasons to think that e.g. Al Gore is getting money from these barbaric acts as well and he should therefore be executed as soon as possible if we want similar things to stop. The arrogance of this criminal is just breathtaking. This guy who has earned tens if not hundreds of millions of dollars from the ideology that leads to the flattening of villages in Uganda has posted the following latest text on his blog:

What accusations has he raised? Here's an excerpt:

A consultant received $100 an hour for his work, an ad was bought for $2,000 (compare with the stolen $300,000,000 for Gore's own ads full of lies). What a crime! Note that the climate skeptics in the world produce something like $50 trillion every year. And this story is sold as something wrong by the people who are behind the flattening of villages in Uganda and who are earning $100 million per fat pig. This level of chutzpah is just incredible. Please, execute him already, whether the judicial details will be quite kosher or not: enough is enough.

If you hesitate too much, he and his IPCC comrades may come to your house, flatten it, and burn it with your kids.
Luboš Motl v 11:56 AM
Share