In May 2011, TRF readers were reminded about the ongoing full-fledged war of existence of the dark matter:

Recall that there are two opposing camps of experimenters, namely DMIS (dark matter is seen) and DMINS (dark matter is not seen). At the end of the article, I mentioned that CRESST-II, another experiment, would join
On the other hand, we still have the axis of evil (the central powers) also called
– please, don't forget that these are just labels without any emotional associations – that claims that dark matter couldn't have been seen by the axis of good above. The Day D has arrived: CRESST-II joined the DMIS allies by this preprint

The main result obtained by dozens of authors using an exotic CaWO crystal is shown by this graph: 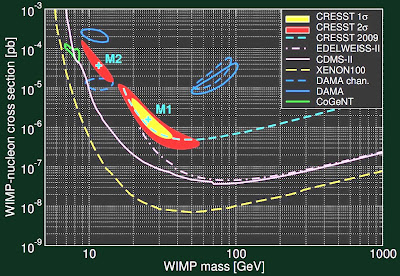 
Evil XENON100 claims that at the 95% confidence level, the properties of the dark matter particle – mass on the \(x\)-axis and some cross section with a proton/neutron on the \(y\)-axis – have to sit below the dashed yellow line at the very bottom. This is a very hostile claim because the interesting regions are located above this dashed yellow line. ;-)

Their fellow sourball CDMS-II makes a similarly hostile but less ambitious statement: the right point sits, at the 95% confidence level, below the full light violet line – one that runs through the center of the green blob on the left side. So CDMS-II belongs among the jerks: again, don't forget that this is just a label without any connotations influencing the validity of the claims so avoid all emotional outbursts. :-)

Looking at the positive guys

Another ethical team, CoGeNT, prefers the blue region on the left upper side at the 90% confidence level. Note that it doesn't overlap with the blue region.

The new addition involves CRESST-II which has the 1-sigma and 2-sigma regions depicted as the yellow and/or yellow+red areas. Again, note that these yellow+red areas overlap neither with the blue ellipses nor with the green irregular blob. The new paper says that the "background only" null hypothesis is excluded at 4.7 or 4.2 standard deviations near the points M2 or M1, respectively.

So CRESST-II says that while they firmly belong to the "dark matter is seen" coalition of the willing, they're not terribly compatible with the numbers measured by their friends in DMIS, namely DAMA and CoGeNT. However, the disagreement is not bad. Look at the left upper corner of the red filled ellipse with the M2 point in it. It is inside the 2-sigma CRESST-II region (the smaller component of the preferred region) but very close to the green CoGeNT blob as well the upper left DAMA ellipse.

So I personally think that the picture "dark matter is being observed" is getting more convincing and the graphs are gradually becoming tools to measure what the mass and cross section of the new particle actually is.

The preferred mass is already known within 5% or so which is amazing; the cross section is known at the 50% accuracy which looks inaccurate but we could be misunderstanding how the interactions of the new particle with protons, neutrons, and their various bound states differ from each other. The former two (proton vs neutron) could differ because of the neutral charge of the new particle; the latter two (nucleon vs bound state) could differ because of some interference effects that are not properly understood.

Up to these possible inaccuracies, I do think that the case for a 10-GeV-like dark matter particle has become rather strong. If you need a more skeptical voice, see Prof Matt Strassler.

If the new 10 GeV particle is a bino or photino, it will violate the expectation of many people who would think that this particle should be much heavier. (In the case of colliders, experiments are showing us that the SUSY particles are heavier than people expect, so this goes in the opposite direction.) But you know, this would be pretty much a superpartner of the photon and the photon is massless. So is it really unnatural to expect that the right model will make the photino just a little bit heavier?

I feel that supersymmetry model builders have been assuming that all superpartners must have similar mass – and it is this very assumption that seems to collide with some recent experiments. The model that takes this assumption to the limit, mSUGRA (a 5-parameter subspace of the 105-dimensional MSSM parameter space), is mostly excluded by the LHC by now. I think it's obvious that SUSY phenomenologists must get rid of this egalitarian bias and they must be much more creative and investigate models with various kinds of new hierarchies between the superpartner masses.

Some of these hierarchies could have pretty natural (and technically natural) explanations: unfortunately, any hierarchies have been politically incorrect for many years.

By the way, if you like to think about the co-existence of supersymmetry and the laws of cosmology in our Universe, there is a new interesting paper by Daniel Baumann (Cambridge UK) and Daniel Green (IAS Princeton):


Signatures of Supersymmetry from the Early Universe


They review the theoretical reasons why inflationary cosmology naturally requires SUSY, discuss the generic emergence of some degrees of freedom that this picture seems to imply, and analyze the existence of non-Gaussianities in the cosmic microwave background that could be "protected" by arguments rooted in supersymmetry.


By the way, Juan Maldacena became the world's most beautiful mind. 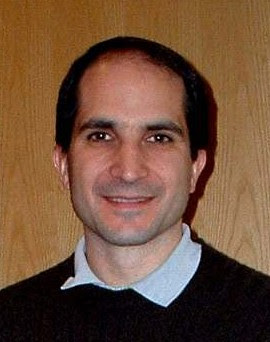 This picture I took at Harvard in November 2003 at Harvard (the only image on the page above) helped him to grab the award.
Luboš Motl v 9:37 AM
Share