Why a small cylinder buried in Prague radiates 500 μSv/h?

Related story (Dec 2013): Thieves of cobalt-60 in Mexico are likely to die

Was the excavator that was digging a hugely radioactive material in the Czech capital caught by the Google StreetView minivan?

Did Marie Curie Sklodowski dig her first radium obtained in 1898 from the Bohemian Jáchymov pitchblende in Prague-Podolí? ;-)

Or did they sell exactly these lethally toxic metallic pieces as "universal cures" in the 1920s and 1930s, as a TRF reader remembers?

A "random passer-by" (as he was identified by the Czech media), the Verizon network engineer Pavel Bykov, was just passing by a children's playground in Sinkulova St, near the crossing with Lopatecká St in Prague-Podolí (not too far from Vyšehrad: I was walking through this street as well in June: it's fun to see those things via Google Earth again), together with his son yesterday, when his wristwatch (picture!) suddenly started to beep. 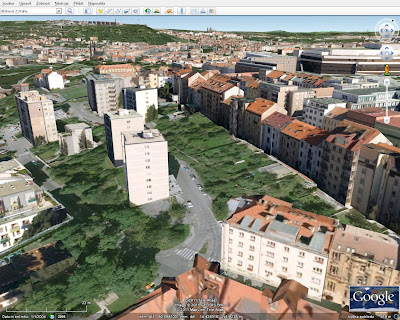 I think that this is the relevant crossing: via Google Earth and L.M.

You know, this random passer-by had installed a dosimeter in his timepiece: that's apparently what passers-by in Prague routinely do. Well, more precisely, some of their watches have dosimeters, others have a fountain. Mr Bykov thought it was a mistake of the device so he returned home to pick several other dosimeters and Geiger-Müller counters that this random passer-by keeps in his living room (picture!). And indeed, all of them confirmed that the radiation near a trash bin was significantly elevated.


Within hours, the claim was confirmed by police and others. Firefighters are trying to find the source of the radiation: all of them believe that the source is hiding under the soil. (As you can see, this paragraph was written early in the morning.) So far, it seems that they haven't considered the possibility that the answer could have something to do with the trash bins. (Well, this suggestion has certainly proved wrong pretty soon.) 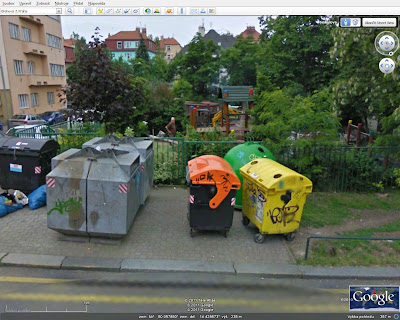 Click to zoom in and see the agent of a rogue nation together with an employee in an excavator (and a truck behind it) as they deposit the nuclear bomb or radioactive waste into the children playground. By a coincidence, a Google StreetView minivan caught them during action. ;-) As Bohdan figured out, the playground was completely reconstructed in 2010: source 1, source 2 (search for Lopatecká). Note that the location of the excavator near the "wooden cottage" seems to be just a meter away from this guy (source) who is measuring radioactivity there. Just to be sure, all these observations are mine.

At any rate, the search for the explanation so far looked amateurish enough so that those folks could hire "random passers-by" (Verizon would surely sacrifice them for a few hours) instead of firefighters and they could get clearer answers. :-) At any rate, Bykov claims to have measured 500 microsieverts (click for an introduction to radioactivity units). This is a bizarre statement because the unit of radiation level is a microsievert per hour and not just a microsievert.

Update: Detailed measurements (EN) of the radioactivity of the object. 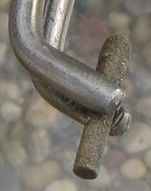 So I don't understand whether the figure is supposed to be the total, integrated radiation he has received – in which case we should know how much time he spent there for the figure to be any useful. Or does it mean microsieverts per year? In that case, the figure would be comparable to the natural background radiation. Or did he mean microsieverts per hour? In that case, the children's playground remotely resembles the Fukushima reactors. ;-)

Wow: update. The scary figure has been confirmed. Indeed, the radiation is about 500 microsieverts per hour so if you stand on the place for one hour, you receive the annual public health limit per capita! Scary: if you stay there, the death is more likely than not after 5,000 hours or so (half a year); LM estimate. 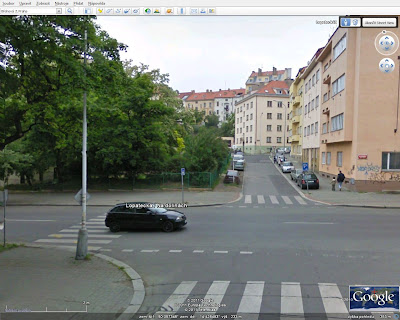 I was originally confused by what the sloppy journalists meant by "500 microsieverts" without a missing time interval. It could have been 500 microsievert per year which would be close to the natural background (or twice its average value). But they really did mean the scary value of 500 microsieverts per hour.

A circle of radius 10 meters or so was isolated at that place. Nuclear safety experts should be working there today. I wonder what they are going to find. And I hope that they will convince the journalists to use slightly more sensible units and numbers in their articles.

Ms Dana Drábová, our top nuclear safety watchdog, just suggested that it could be due to not-quite-natural thorium in the soil. She knows 100 times more about those matters than I do so I choose to treat her guess as the most likely single explanation at this point. She noted that such levels don't occur naturally so the material was probably dealt with by humans... (Later, radium-226 was conjectured as a newer possible answer.)

Let's hope that it is some random piece of trash or radioactive stone and not a message from the Palestinian activists that they don't like the Czech plans to vote against Abu Mazen's unilateral steps in the U.N. Well, if you want to be scared of Allah, I can easily give you another reason to be scared. Look at the playground from another perspective: 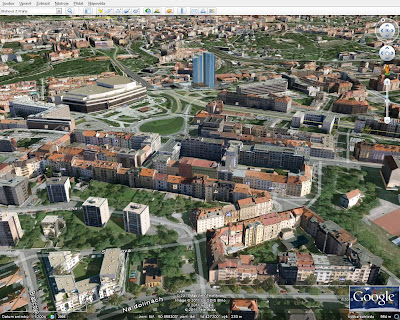 The playground is in the middle of the lower boundary. The huge flat building near the upper left corner is the Congress Center. The blue glassy towers near the top, in the middle, are the Corinthia [Towers] Hotel. The distance between the hotel and the playground is 600 meters. In February 2007, police was investigating anonymous threats of a bomb attack against the hotel. To help your fantasy, the the hotel has also been owned by a company largely controlled by Muammar Gaddafi's Libya since the 1990s.

Homework exercise for you: Open Google Earth, go to the Corinthia Hotel, and imagine that you were assigned the task to find a nearly invisible temporary place to store a dirty bomb somewhere in the vicinity of the hotel. I want to believe that I am joking but I am not quite sure whether I am. ;-)

Eugene S. has conjectured that a hospital could have thrown away some radioactive waste, something that has occurred in Latin America (and you surely don't expect in a civilized country). The closest hospital is just 2 blocks or 340 meters away, to the Southeast-east. It is called Medicover Ltd and is located in Lomnického 5, Prague-Pankrác: picture. In the fast comments, I mention two other hospitals that are 800 and 1,500 meters away, respectively.

Around 1 p.m. on Thursday, it was announced that the source of the huge radioactivity was a small cylinder buried under the ground: source. The scary object has been transferred to the Nuclear Center in Řež near Prague for further investigations.

My fast first guess is vaginal brachytherapy (picture), a method to treat cancer, but if it produces 0.5 mSv per hour even at a distance of one meter, it doesn't exactly look like a key to survival. ;-) Indeed, radium-226 is the most frequent isotope used for brachytherapy. Those who prefer the Muslim explanations over the medical ones will like to notice that in 2000, three Egyptians died after exposure to a radioactive cylinder. But the origin of it was medical, too.

Update: newer reports said that the size of the cylinder is 2 mm × 2 cm which is just tiny: no vaginas. Imagine how strong a source of radiation this thing must be. At the distance of a centimeter from it, it must be emitting several Sievert per hour. Click at the picture above to get a historical page about radium needles from 1905 etc. 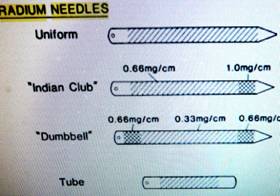 So the object may have been there for 100 years. Recall that in 1898, radium was discovered by Marie Curie Sklodowski in pitchblende (smolinec in Czech; uranium ore) that was sent to her from Jáchymov (Joachimsthal in German) in the Czech lands, then a part of Austria-Hungary. Well, at least the first polonium discovered on the same year was in this stone. While radium was surely contained in the Jáchymov mineral as well, I am not sure it was actually the first radium she met. ;-)

At any rate, if you're a terrorist and you need to transfer some radioactive material in Prague, chances are that someone will detect you with his wristwatches, at least within 100 years, he will. Choose a less hi-tech country. ;-)

Because the cylinder is a closed source of radiation, the radiation returned to normal levels as soon as they removed it from the kids' playground. However, the local administration will pay some money to test the whole neighborhood by Geiger-Müller counters against the hypothesis that there are additional radioactive cylinders.

At 3:15 pm, I received a pleasant e-mail from Dr Dana Drábová and I hope it's OK with her that I will boast as well as share some fresh information. Let me hope that the TRF readers won't interpret the message in an excessively romantic way. ;-) She wrote in Czech:

thank you very much for your interesting suggestions and I admire your appetite to follow so many things. I would need that, too. I haven't had enough time for a more trustworthy analysis of the situation yet: we are happy that the object could have been found. At the end, the stuff is radium-226, most likely from an age-old medical device. I am aware of my resemblance to Radio Yerevan but this is my fate: the media are publishing things more quickly than the time we need to compose a credible report. Look occasionally at our website: we will be posting information as it arrives.

Thank you very much once again: when we have some photographs, I will send them.


She sent me the photographs of the tiny cylinder around 4 pm so you're among the first people in the world who see it: click the pictures to zoom in and when you will look for it, don't forget that the cylinder is tiny. 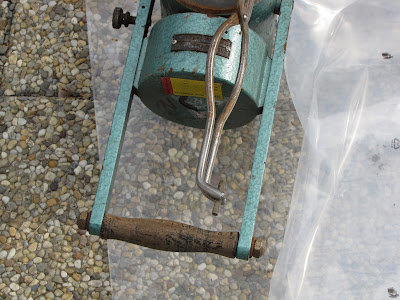 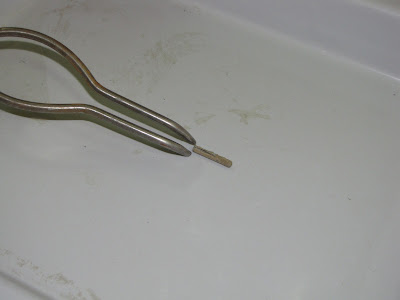 Meanwhile, Willie Soon sent me a Taiwan article claiming that chronic radiation is good to prevent cancer. No opinion now: of course, this claim is counter-intuitive for many people but the paper may contain actual evidence that it is true.

P.S.: Note added in 2015, when Polish readers recall and reread this story. The text above doesn't make it clear what the resolution was. It was agreed that the radioactive piece was indeed a medical gadget to insert into female reproductive organs to fight cancer etc. – perhaps a gadget from the 1930s.
Luboš Motl v 9:24 AM
Share