Does the melting Petermann glacier render you speechless?

Imagine that you were hired to find some evidence that there is something unusual going on with the climate. There is nothing obviously unusual so you have to search intensely. Finally, you figure out that something marginally interesting - something that could look anomalous to an observer - could be going on in Greenland. 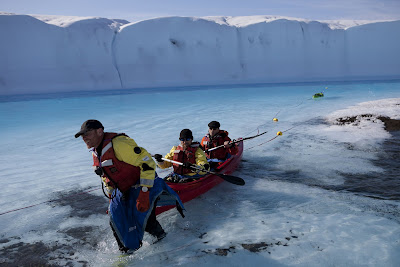 Kayaking near the Petermann Glacier: click to zoom in.

And I don't mean the whole territory of Greenland. We are talking about the Petermann glacier on the Northwestern coast of Greenland, next to Nares Strait. Just hundreds of square miles of ice on the boundary between the Arctic Ocean and Greenland.


The Petermann glacier is much thinner at the calving front (the side where it wants to break) than other glaciers and it moves more slowly. So things can change and when they do, the steps are larger. And indeed, in August 2010, a 100-square-miles (260 square kilometers) ice island broke off the Petermann glacier. BBC wrote a story about it:

Incidentally, they also asked Prof Andreas Münchow of Delaware, an oceanographer, and he told them that it wasn't clear whether the event had something to do with global warming. Now, should you be shocked by such things? The ice island becomes a part of a few million square kilometers of sea ice that is constantly changing every week. Most of it melts and refreezes every year. Of course, if ice gets thin, it may break.

Now, it's one year later and because the interest in the climate apocalypse has continued to cool down, the media have to be more hysterical for the "overall impact" to be comparable to the 2010 values. So when another piece of ice is breaking off this mass of ice - which shouldn't really be called a glacier because a glacier is a persistent body of ice and this one is obviously not - the required story is similar to the 2010 BBC story on steroids.

A few hours ago, MSNBC wrote an article called:

It's been widely read and the discussion below the article has about 1,000 comments. MSNBC derives the most obvious conclusion out of this dynamics of ice: Rep Edward Markey is the ultimate king, everything is due to carbon emissions, and America must adopt something like Markey's anti-carbon regulations. So several anti-denier videos are a key part of this story about a glacier which is not a glacier.

Some differences between the 2010 BBC article and the 2011 MSNBC article are almost comical. In 2010, the BBC didn't have a good experience with professors because Prof Andreas Münchow told them that it wasn't clear whether the event could have been linked to global warming.

So in 2011, the MSNBC carefully avoided professors. They picked a reader, which is a lower academic rank, named Alun Hubbard. His rank is low enough so that among the people with this rank, you may find some (if not lots of) folks who are ready to say exactly the kind of junk that MSNBC wants someone to say and predecided to constitute the skeleton of their propagandistic article.

The whole story was based on the emotions of this single man. Most importantly, he was rendered "speechless" when he saw the changing glacier. ;-)

I have honestly spent about 20 minutes by looking at numerous pictures, trying to understand what is so spectacular about some changes of the ice, but I have utterly failed. It's easy to find a person who is rendered speechless when he sees that ice may melt or break - most of the Arctic sea ice is doing these things every year and all the time and some people are not aware of this fact. It's much harder to use the same information to render impartial, non-cherry-picked people speechless.

Is there a TRF reader who gets excited about these changes? I would love to be explained what it is that can make someone excited. What I see on the pictures is e.g. the following:

On this 2009 picture, I see some ice on something that looks like a big river. I know that such ice may melt very quickly. On the Bolevák pond, we may skate on one day but not on the following day. But this is a big river so the changes may be a bit slower. But the shape of it surely won't stay constant for years, will it?

And indeed, it doesn't, as this 2011 picture shows. Sometimes there's more ice, sometimes there's less ice. WTF? If the ice is moving slowly, it doesn't mean that the thickness is not changing at all. And if the thickness somewhere in the middle randomly approaches zero, you will separate a big ice island. If the ice were moving more quickly, the pieces would be breaking more frequently - the islands would be smaller and more frequent. What a shock.

Much like in the case of other glaciers (but not all of them), this one has been receding for centuries - long before CO2 levels started to significantly increase. Earth has seen much more brutal changes during the glaciation cycles when miles of ice above Manhattan would melt or refreeze just within thousands of years.

Moreover, the very process of calving doesn't really mean that the total ice diminishes. It's much more typical that ice is calving after it grows too much. I don't want to go into tons of technical details of ice dynamics that depend on thermodynamics, hydrodynamics, as well as mechanics of solids. What I want is to convey a much broader point. At any rate, people are not born with the hardwired ability to estimate how frequently a piece of sea ice will disconnect from the land somewhere in a particular piece of Greenland. One has to carefully study it. Such things do occur sometimes: we may study the frequency, the distribution of the areas of the disconnected islands, and so on. Various things occur.

If you see an event once or twice, it doesn't mean that it's unusual. To claim that it's unusual, you would have to make the same observations of the whole Greenland throughout another century - like the 16th century - and compare. If you can't do it, you should assume that what you're observing are just the laws of Nature: you're observing how Nature normally behaves. If you automatically attributed anthropomorphic causes to things you observe in Nature, then you are a superstitious nutcase.

Nevertheless, ice isn't gold. It's a volatile thing that melts and refreezes and breaks and sublimates and it does many other things. Nature is in the state of flux. You can never step into the same river, Heraclitus of Ephesus observed. This is true literally - and indeed, we need pretty much the literal version of his quote - as well as in various derived interpretations.

But why are we so much less wise than the ancient Greeks? Why are the people in the 21st century - and even people paid as "readers" - rendered "speechless" if they step into a river and they see it's not the same river as when they did a similar thing years ago? Why is the mankind becoming so dumb and why are these dumb people allowed to be journalists in influential media organizations or their sources?