It's September 14th and Climate Parody Day or 24 hours of Manbearpig, a big yawn organized by Al Gore, has begun. Dozens of people in the world, including David Suzuki, will be watching Al Gore how he invents his own reality much like he invented the Internet.


Related: Only 2% of the consumers approve Gore's Facebook & Twitter-based malware methods to spread (or to delay the death of) the global warming panic.


But what's happening in the reality inhabited by the remaining 7 billion people?

Well, you could guess: as we have gotten used to, the rest of the reality is affected by the Gore effect. Here is a screenshot of weather.com that was taken a few minutes ago, on 8 a.m. Prague Summer Time, September 14th, 2011 (it's a prediction of lows for September 15th): 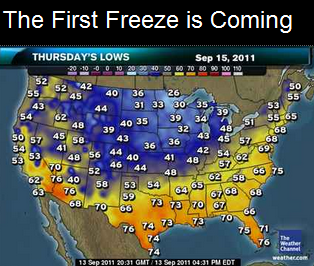 Yes, the first freeze of 2011 is coming to the United States on Climate Reality Day! Meanwhile, a similar below-average or average weather exists in the whole world. In the Atlantic, there is one weak tropical storm called Maria with zero chance of becoming hurricane and zero chance of hitting the U.S. land.


The 2011 Atlantic hurricane season has so far seen 2 hurricanes (both major): the average for a whole season (that ends in November) is 5.9 hurricanes including 2.3 major ones. So far, we're below the average. The total number of tropical storms so far has been 15, above the average of 9.6 for the whole season.

The Arctic sea ice anomaly is below zero (i.e. the sea ice area is below the average) but it is still more than half a million square kilometers higher than the ice minimum recorded in September 2007.

So there is nothing unusual about the weather and the behavior of the atmosphere on September 14th, 2011, in comparison with any similar late Summer date in the recent centuries. Still, there exist people on this world who have the stomach to talk for 24 hours – and address their speech to 7 billion people (even though only dozens will listen) – and say that the Earth is nearly dying in their struggle to earn the first billion of dollars coming purely out of malicious libels attacking carbon, the key element of all of life.

Some people's immorality is just breathtaking.

Thankfully, no one in the Czech Republic is talking about this "event" at all. There is only one report in the union of all Czech media, in aktualne.cz (fresh news server). The article criticizes Gore for breaching the ultimate barriers of morality when he asked people to donate Facebook and Twitter accounts to him – something that no activist, even if he fights for the holiest things, should ever do.

There are two comments under the article. One of them recalls that Gore is a convicted liar. The other says that this is how it usually ends up when someone makes living out of the human stupidity. Hasn't anyone watched the Rainmaker? Czechoslovak wright Karel Čapek would use the term "Green Disease" for carbon taxes, emissions allowances, and expensive solar energy. All these things are fraudulent. Everything is based on pure speculations. Distorted science. Money. Especially our money paid for their speculations. Commanding the wind and rain. A global scam.

To show that he is just a big joke, Al Gore served as an assistant clown of Stephen Colbert yesterday (together with Paul Krugman). See the full episode (which starts after a minute of ads). Gore was on crack so he was laughing for the whole time. He was so intoxicated that at the end of the show, he violated the basic condition of his contract with Comedy Central and outed Colbert when he referred to Colbert as "your character". (Gore told Colbert that "your character" should rightfully be pissed off as well.)

By the way, Gore's indication that the right-wing Stephen Colbert is just "your character" while the real Colbert is a whining left-wing jerk like Gore himself is also factually invalid. The real Stephen Colbert that earns all the money etc. is a sensible right-wing American patriot with a sense of humor, somewhat similar to Bill O'Reilly. The boring left-wing Colbert is just an irrelevant and unknown parasite who lives out of the real right-wing Colbert's subsidies.

Incidentally, in an interview, Maggie Fox, the CEO of Gore's Climate Reality Project, promoted Al Gore as a prophet of climate change. Literally.

In special elections deciding about the seat of Anthony Weiner, the voters in a traditional Democrat Party's bastion, the New York City, voted for a retired Republican businessman Bob Turner, a fan of Hayek, Israel, and a climate skeptic. Even the mostly pro-Democrat voters already seem to be fed up with fνcking-and-tweeting alarmists.

Somewhat unusually, the main topic of the elections was foreign policy and the result is a punishment of Obama for his relatively hostile treatment of Israel.
Luboš Motl v 8:18 AM
Share