Al Gore has claimed that the Climate Reality Project received 8.6 million visits on Climate Parody Day between September 14th and September 15th. That's just 0.1% of the world population and the impact was negligible. But we may still ask, is the figure 8.6 million real? What does it exactly mean?

Let's count the unique IP addresses that visited Gore's server. Alexa.com offers us this graph depicting the percentage of Internet users who have gone to climaterealityproject.org: 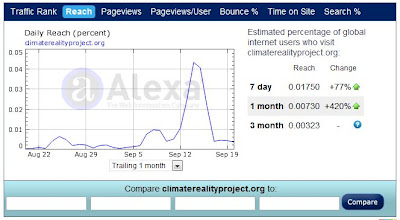 You see that the peak number for 24 hours was 0.043% of Internet users. Let's assume that you could choose a better, shifted 24-hour period and the percentage could jump to 0.05%. How many people it actually is?


Well, you must take a server for which you know both the number of visitors as well as the Alexa percentage. For example, take this blog. The daily reach is reported as 0.0013% of Internet users. The inverse of 0.000013 is 77,000 so 100% of the daily Internet users, calibrated in the Alexa way, is 77,000 times the average number of daily visitors (unique IP addresses) to TRF which is about 4,700 people.

The product is 362 million or so: only a fraction of the world population see the Internet every day. Well, the actual global number of daily Internet users could be higher but the rest comes from regions where no one has installed the Alexa gadget. However, those regions are equally unlikely to have watched Gore's slide show so the number of Gore's visitors won't be too affected by this possible incompleteness of the Alexa data. We may rather safely focus our attention to those 362 million daily Internet users who are statistically represented in the Alexa figures.

Gore's 0.05% of 362 million is 180,000 people. This is the number of IP addresses that reached Gore's server on Climate Parody Day. Because the average time spent on the website is reported as 3 minutes or so, just like for TRF, it's mathematically inevitable that at most 10% of the people spent at least 30 minutes with the boring slide show.

So I qualitatively – and pretty accurately – confirm the calculation by Charles the Moderator at Anthony Watts' blog who also ended up with very similar numbers based on alexa.com data for WUWT.

In other words, Gore's figure exaggerates the number of unique IP visitors by a factor of 50 and the number of people who actually spent some time with this boring show by a factor of 500. This is comparable to the extent to which how Al Gore overstates the magnitude of the man-made warming (50) and its destructive impact on the world (500), respectively.

It's hard to see whether the number 8.6 million was completely fabricated or whether it counts the total number of files or connections that the users have downloaded or established during the 24-hour period. Gore is deliberately vague about what the number 8.6 million means. But he surely wants the people to believe that the figure counts the actual people and there is very strong evidence that this claim is a big lie, by orders of magnitude. You can't even believe when Al Gore says "good morning".

The WUWT story was just discussed by James Delingpole whose text was also linked to from drudgereport.com.

If you live in an atheist environment and you don't know what five loaves and two fishes in James' article refer to, well, they say that Al Gore has achieved what only Jesus Christ could do before him. That's not too surprising given Gore's prophet status, recently confirmed by Gore's top employee Maggie Fox. If he doubles her salary, she may refer to him as God, too. ;-) If he increases her salary by a factor of 500, she may finally reach the financial independence to afford to be a climate skeptic just like any other sane person.

Because of the huge success of Climate Parody Day, Al Gore is promoting another fascinating and influential event organized mainly by his friend Bill McKibben of 350.org. To emphasize that our Earth already died when the CO2 concentration was 350 ppm about two decades ago, they will collect a few brainwashed savages in Indonesia who will be biking for 350 hours during the weekend. It's not easy because a regular weekend only has 48 hours but don't forget that McKibben, much like Gore, is capable of doing miracles.
Luboš Motl v 12:00 PM
Share