Plus comments on Nobel prizes and Tevatron's retirement

As Phil Gibbs reminded us, Nobel prizes for medicine, physics, chemistry, nothing, and peace will be distributed next week on Mon, Tue, Wed, Thu, and Fri, respectively. The last two prizes out of five that I mentioned displayed a very similar degree of credibility recently and it was not only because of Manbearpig and the bystander in the Oval Office.

Economics (recently rewarding far-left zealot and economics crank Paul Krugman) will be saved for the week afterwords; the D day for literature (going mostly to Marxist and homosexual writers but there were some recent exceptions) is traditionally undecided in advance. In my opinion, physics, chemistry, and medicine Nobel prizes still preserve some kind of credibility.

Meanwhile, the funny Ig Nobel Prizes (for magnetically levitating frogs and similar cool things) will learn about their winners in Harvard's Memorial Hall tonight, at 1 am, Prague Summer Time.

This video is the trailer for these prizes. Many laureates of the boring, serious Nobel prizes are participating at the Sanders Theater event. There are already people who first won an Ig Nobel prize and then they won the ordinary Nobel prize. Well, I mean Andre Geim who won the 2000 Ig Nobel prize for the levitating frog as well as the most recent 2010 physics Nobel prize for graphene.

The only other example of such a "double win" is a member of an international nuclear panel that won the ordinary Nobel prize as a member of the group.


On Friday morning, I could update the page because the winners are known. They include researchers who found that beetles have sex with bottles on Australian roads; who found the ideal density of wasabi in the air; and who discovered the decrease of tendency to make impulsive decisions when you need to go to the toilet. Because of the focus on chemistry, someone also gave a lecture on pH of your vagina that you should leave alone, i.e. you should avoid douchebags, or something like that. ;-)

After decades of work, the 2-TeV Tevatron is shutting down. It's been the particle physicists' main tool to do experimental high-energy physics, a kind of a flagship, for decades. However, it was not supposed to be the leader: the SSC should have been with us for more than 15 years. But the SSC was cancelled in 1993. Correspondingly, the Tevatron didn't bring too many breakthroughs. It wasn't expected to do so, anyway.

(ISABELLE in Brookhaven, a 0.4-TeV proton-proton mini-LHC, was cancelled in 1983: that's when the experimental dark ages in particle physics really began: CERN found the W- and Z-bosons on the same year and nothing equally big was seen for 27+ years.) 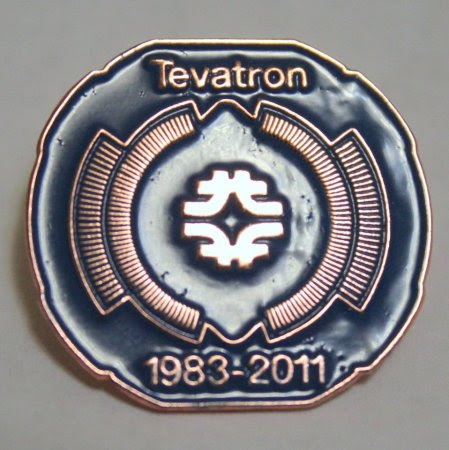 The widely expected discovery of the top quark at the Tevatron in the mid 1990s is an exception.


See the official Tevatron timeline with its history and pictures...


The Tevatron could have been shut down earlier because it simply can't compare to the LHC: it has become self-evidently uncompetitive. Its center-of-mass energy is 3.5 times smaller than the same figure at the LHC: and this disadvantage will double to 7 since early 2014 when the LHC will be running at 14 TeV center-of-mass energy.

However, even when it comes to the luminosity, the Tevatron has become a poor relative of the LHC. After many and many long years, it could have accumulated at most 10 inverse femtobarns per detector. Both major LHC detectors have already acquired 4 inverse femtobarns of data during a year of serious running.

However, this comparison understates the huge difference in the discovery potential. In reality, most of the interesting physics arguably occurs above 100 GeV where the capability of the LHC to find new things is greater than that of the Tevatron by a factor of something like one million.

It really makes no sense to continue to run the Tevatron. Even if it found some hints of new interesting phenomena, they wouldn't be trustworthy and conclusive. At the end of the Tevatron's career, the collider has produced many embarrassing spurious signals (especially CDF did). Even if the Tevatron were running for another decade, it couldn't acquire the same amount of data as the LHC has already recorded. The running would be redundant. It's like collecting nickels when you already possess 100-dollar banknotes.

Some people obviously want to keep the "employment levels" high but this is simply not a good justification for expenses that are counted in billions of dollars. Scientists of course like to behave much like any other parts of a "big government" but they shouldn't: they have a special obligation to be honest and to candidly say that their experiment has become useless if it has. And the Tevatron has. So thank you, Tevatron, for your services: and a good riddance, too.

I wish the Fermilab (the broader facility that hosted the Tevatron collider) further successes and a hope that it may return to the top of experimental particle physics sometime in the future. Meanwhile, we have entered a period in which Europe has become the leader of experimental particle physics. It's likely to continue at least for a decade, maybe two.
Luboš Motl v 5:27 PM
Share