The file offered below may be specifically useful for Czech readers – only 7% of the TRF visitors – but also for others.

Did you ever find your keyboard layout incredibly limited? Haven't you ever been upset that you can't write François with the funny French accent beneath "c" or El Niño with the funny Spanish accent above "n"?

What about the annoying "minus sign" that always produces a small hyphen, like in "high-school students", but it never types a longer dash – such as this one – or an even longer dash — such as this one? ☺ And why can't you just type the smiling from the beginning of this sentence? ☻ Or a reverted one?

(Press CTRL/+ or CTRL/– to get a higher resolution if you need to see some fine symbols more clearly.)


And what about all the accents in Danish, Swedish, Norwegian, Dutch, Hungarian, Czech, Polish, and the Greek alphabet? And what about E = ħω, the formula for the energy of a photon? Believe me, I didn't use any LaTeX now, just ordinary Unicode characters. I could go on but you get the point.

If you feel that you may want a keyboard that allows you to type hundreds of special characters by a combination of two keys – one dead key and one actual key – and if you use any Windows operating system, you should download Czech Lumo Keyboard 2011f/g.

After you download it and unzip it, go to the only subdirectory and just run the setup.exe file (created by Keyboard Layout Creator by Microsoft: please feel more than free to use antivirus to check the file) and it will add the keyboard to your list of keyboards (by running the right application for your class of microprocessors). I also recommend you to go to keyboard settings in the control panel and allow (left) ctrl/shift to switch between languages so that you don't have to click at "EN/CZ" all the time.

In principle, all users may use it as the primary keyboard but I only recommend it to the Czech (and similar) users who frequently type things like ěščřžýáíé etc.

Description of the keyboard

It is formally a Czech keyboard so it allows one to type some standard Czech accented characters very easily. But it allows you to type all European Latin-based characters, Greek letters, and many more. Among the letters, I have verified the presence of all accented letters used in all European languages that use Latin-based scripts. The only missing characters were a few Icelandic and Old Welsh (extinct) letters, but even among these exotic tongues, most of the characters may be found on the keyboard.

The self-explanatory screenshots below (click any of them to zoom it in) show that some usual English characters such as numerals are overwritten by Czech accented letters; you need to press SHIFT to get the numerals. The original characters such as !@#... that were obtained by SHIFT can be typed with right ALT – which is equivalent to left CTRL plus left ALT. Note that there are also some characters typed with right ALT and (any) shift.

Regular keyboard without any SHIFT-like switchers. Some Czech garbage has overwritten punctuation signs. You will get them back.

The same scene with SHIFT. You recover some punctuation signs but lose others.

Right ALT or, equivalently, left ALT and left CTRL restores most of the symbols and gives you some currency symbols, lawyers' paragraph, and so on. 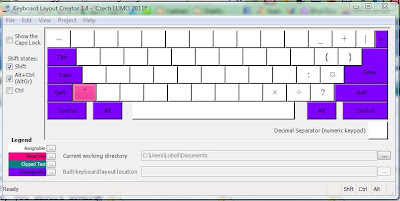 Right ALT plus SHIFT gives you some extra interesting symbols including nice symbols for multiplication and division.

CTRL gives you some regular symbols as well but applications may override these CTRL combinations so one can't rely on this key.

CAPS LOCK differs from SHIFT by giving you the capitalized Czech accented letters instead of the digits etc.

Most of the magic is hiding in four dead keys (pink on the pictures above):
As you can see, all of them are located on the top row with digits. Two of the dead keys have shift; two of them don't.

These keys redefine the meaning of the next key you press. If you want to type ~, =, +, \, you simply press the dead key twice in a row (my invention, too). This small sacrifice allows you to access over a hundred of new characters by a simple pair of keystrokes: one dead key and one generic key.

Well, truth to be said, there is also a potential fifth dead key, between left SHIFT and "z", but it only exists on some (German) keyboard and moreover, all the characters (such as "űőÜÖß") have been reproduced elsewhere (umlauted "v0s" with or without SHIFT), so you don't depend on this key at all.

Listing the meaning of dead keys

It's useful to rename the four dead keys, to reflect their "dominant" impact on the letters. They will add an adjective to the next key:
The rest of the article explains what it means if you add either of these four CAPITALIZED adjectives in front of any other key.

The simplest accent is "LONG": it adds an acute above a letter. So you may type vowels áéíóúý, ÁÉÍÓÚÝ, as well as

(the line with digits, started from left apostrophe), as well as

which are the same things with a shift. You see the first half of the Greek alphabet. The main QWERTY segments

which have 2+2+3 non-letter keys next on the right side from the letters type the following when they're long:

where the original character such as J,K,M means that the function is not well-defined, so you get an acute and a letter. This was without shift: you saw two more Greek letters near the digits, λμ. The same sequence with SHIFT gives

where small letters means an ill-defined key. You see that various long letters and slashed letters, including "ħ" (long "h"), can be obtained easily. A funny detail is that Ð isn't the same character as Ð: one of them is Southern Slavic and the other is Scandinavian haha.

Similarly, here are the HATTED keys, including the first row with digits. In Czech, the HATTED would be called "HÁČEK" (or by a derived word with the same root) which means a "small hook" (inverted hat) and appears e.g. above "s" in "Luboš". Fine, so here are the hatted keys without SHIFT:

And with shift (I mean, the second key is pressed with SHIFT):

Again, "fghjk" and "xvm" is unused. You see various soft letters with a "HÁČEK" or "HAT, the second part of the Greek alphabet, some new kinds of left and right quotes, some Icelandic characters, relations for sets in set theory, and so on.

You see various square roots, quantifiers, elements for sets, "ß" i.e. a short version of "ss" in German is an UMLAUTED "s", of course. UMLAUTED zero is like "ö" but with the long two lines above "o", namely "ő". There are also various fractions, musical symbols, arrows, infinities, alternative Greek letters, and so on. If you find some of them important, you have to find it.

Fractions, churches, double crosses from footnotes, subscript 2, subsets, vertices of a triangle, double arrows for various implications, broken arrow resembling ENTER, mirror "P" for a paragraph, and so on, and so on.

Finally, we're getting to the CIRCLED characters obtained by the left apostrophe dead key:

A degree, superscripts 1,2,3,4, 0.1 percent, card symbols, "o" with a tilde, approximate sign, some fat dot in the middle, currency symbols for pound, yen, cent, hybridized "ae" and "oe", Spanish "a" and "o" in a superscript (whatever they use it for), French little quotes ‹like this›, and also acutes going to the left: "aeiou" with the left acute, "àèìòù", is typed as "bfjpv" because these are the letters that follow after "aeiou".

Finally, CIRCLED characters with SHIFT are the following:

Again, you see some El Niño-like symbols from the PIGS countries, trade marks, various letters in circles, copyrights, plus-minus, French quotes «like this», sharp subset relationships, inverted Spanish question mark and exclamation mark, of course on the same keys as the normal ones, smilings, options-like Sun icon, symbols of sexes (Mars and Venus), and so on, and so on.

I forgot: the normal keyboard without dead keys has some symbols such as the lawyers' paragraph, §, but you may also get the alternative ¤ if you add a SHIFT, and so on.
Luboš Motl v 9:12 PM
Share