IPCC: sky will be full in 20 years

And could 15% of Greenland's ice melt in a decade?

It is not only Al Gore who began to jump the shark every day. The most active members of the IPCC are doing the same thing. Be careful: the shark may eventually devour you. 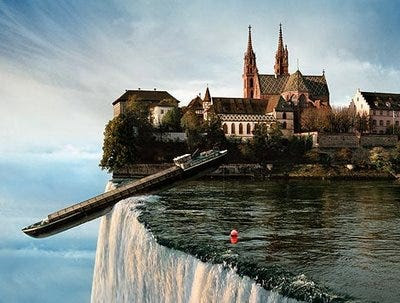 The IPCC's 5th report will calculate that the end of the world (our flat Earth) arrives in 2030 if not earlier.

They inform about some paper to be published in "Climatic Change". Reuters clarifies that regardless of the fact that the paper is self-evident crackpottery, it has already been decided that this paper will be the basis of the fifth IPCC report in the case that the IPCC members won't be arrested before the expected publication date. A lead author of the paper gives us a cute summary:


At present emissions levels, in less than 20 years the sky would effectively be full, meaning every extra tonne of carbon dioxide (CO2) emitted would have to be removed to stay within safer climate limits.


You won't be able to move in the atmosphere: there will be just no space left. Carbon, the main enemy of life among the elements of the periodic table ;-), will occupy the whole sky. A related problem is that the stars will fill the sky at night so the heaven will be white both at night and during the daytime.

More precisely, the IPCC will tell us that you won't be able to exhale in 2030 because the atmosphere will be full of CO2. So whenever you feel like you want to exhale, you will have to add your name on a waiting list.

Make no mistake about it: the CO2 concentration in 2030 will be about 425 ppm and there's nothing unusual about this concentration. It is 425 parts per million or 0.0425% of the volume or, equivalently, of the number of molecules in the air (because each molecule of an ideal gas occupies the same volume at a fixed pressure and temperature, regardless of its chemical composition).

The article by Reuters continues to study the magic threshold of warming by 2 °C which is, of course, just a completely arbitrary and de facto unmeasurable number. Moreover, one should be very accurate about the beginning of the interval – the base line of the temperature that is used for the comparisons. For different points in the past, we get vastly different ideas what it means to warm the Earth by 2 °C. Moreover, different temperature datasets will disagree with each other, too.

Moreover, we would need at least 100 more years and not 20 years to increase the global mean temperature relatively to the year 1800 by 2 °C.

What is so magical about 2 °C? This brings us to the second topic because those people incredibly claim that a warming by 2 °C means that the Greenland ice sheet "irreversibly melts".

Well, melting is never irreversible: the material, in this case water, may always refreeze again. But fine. They say that 2 °C is enough to melt the Greenland ice.

Whatever interpretation you try to attribute to this proposition, you will instantly see that it's complete nonsense. Different places of Greenland have different temperatures – because of different latitude, altitude, and seasons, among other factors. So the ice of Greenland can't melt "simultaneously". If there were significant warming, the ice would continue to melt gradually, continuously.

Obviously, the melting of the Greenland ice is negligible. Why? It is easy to calculate that if all of Greenland's ice melts, the sea level jumps by 7 meters. It's the average figure: because of the non-uniform gravity from the ice itself, the sea level around Iceland would actually drop. In fact, this correct figure has been popularized by the alarmists as well. However, we know that the sea level isn't increasing by more than 3 centimeters per decade and most of this increase isn't due to Greenland, anyway. Sea level rise is dominated by the thermal expansion of the ocean water. Simple maths makes it obvious that at the current rates, we would need thousands of years to melt the Greenland ice.

This brings me to a recent event, the Atlasgate. The Times Atlas has published a remarkable statement that since 1999, 15% of the Greenland ice has disappeared.

The previous paragraph assumed that you talk about the relative loss of the volume of ice. If you talk about the changing area of the ice sheet, you have to translate it to the volume. If the "thin areas" are disappearing, you could get a smaller relative loss of the volume, say by a factor of 5 (which is still insanely high and in direct contradiction with he most elementary observations of the sea level).

But it is actually somewhat unreasonable to expect that the ice will only disappear at the places where it has been thin. The slopes could grow too large etc. Consider an alternative model: the Greenland ice shrinks to a smaller "generalized pyramid" shape which is however similar to the original one. If that's so, a 15% loss of the area is equivalent to a 7% loss of the perimeter and 22% or so loss of the volume (first, second, third power of something): so you would get an even bigger loss of the volume than 15% which is completely unrealistic.

At any rate, if someone is reading these preposterous claims that 1/6 of the Greenland ice has disappeared in a decade, it shows that he must have lost all of his or her common sense. He or she must have become a complete lunatic. It's as crazy as claiming that Manhattan has already been submerged by the ocean. It's always a mystery whether the people behind such incredibly stupid claims – recall the "Himalayan glacier disappearing by 2035" for another stunning example – really believe what they're saying or whether they actively spread something they known to be nonsense.

My best answer is that they work hard to fool themselves – to convince themselves to believe this rubbish. And once they win their internal battle against the last traces of intelligence and integrity, they may spread the virus of stupidity to their environment, too.
Luboš Motl v 9:46 PM
Share