Last Saturday, Czech president Václav Klaus was explaining why the common currency isn't a good idea under certain circumstances - e.g. those that exist in the EU today. On the pages of Právo, a center-left daily that has evolved from the official communist newspapers before 1989, he said the following during an interview:


Q: ... You said yourself that you didn't recommend a spontaneous solution of the problems [in PIGS countries]. How can we avoid it?

A: The dominant issue should be the responsibility of the individual countries. The fact that these countries are hiding behind the curtain of the European Union and that they blame Europe for the problems seems terribly unfortunate to me. I don't like that the Greek politicians aren't able to say that we should adopt certain policies not because the EU is forcing us to do so but because we should do it even if the Brussels were not recommending it. Of course that the sparrows on the roofs were tweeting that Greece was deliberately playing with the statistics. Nevertheless, everyone exerted all of his power to lure Greece into the eurozone. And the result is what we are seeing.

In this sense, I do not blame the Greeks. Any country should have the choice whether to live with half, a quarter or full determination. It should be able to decide itself: we want to sit for more hours in a shadow under cypresses, drinking ouzo, or we want to work more. If Greece decides to devote more hours to ouzo or cypresses, it is absolutely all right. Nevertheless, it cannot enter a currency union with Germany.

I would mention that a big problem is that even when some people sit outside the shadows of cypresses, e.g. in a PIGS tax office, their behavior looks similar as it does under the shadow of cypresses - which is, as the blonde chick entrepreneur may surely confirm, highly counterproductive for the business. ;-) 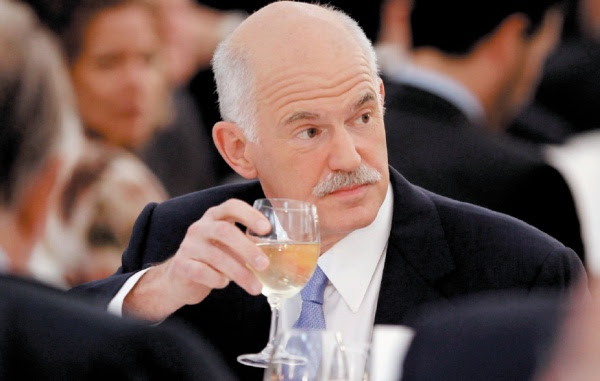 It took five full days for the Greek translators to translate these five sentences and to deliver this information to the Greek Prime Minister Georgios Papandreou. So on Thursday, i.e. yesterday, Papandreou could finally pick the fruits of 120 hours of some hard work of his government bureaucracy: he could finally get very angry! ;-)


The Czech Press Agency summarized the Greek premier's reaction that has filled pages of the Greek media. His reaction to Klaus's innocent, important, and obviously true comment resembles a reply to another nation's declaration of war - a summary that all faithful are obliged to repeat as a holy word: :-)


Papandreou said he had heard with great sadness Czech President Václav Klaus, a well-known anti-European who now wants to express his populist anti-Europeanism, that he offended Greeks with the statement that Greeks drink their ouzo and enjoy themselves, while Czechs are those who work hard.

Papandreou was quoted by the Greek paper Kathimerini, referring to the Athens News Agency (APE).

If Europe does not overcome this approach and is isolated in it, this will be the path toward a fragmented Europe, Papandreou said. The achievements of not only the past decade, but also the past 50-60 years after World War Two will be lost, Papandreou added.

And needless to say, there are many untrue propositions in Papandreou's proposition. First of all, it's been shown that he hadn't heard about Klaus's explanation with "great sadness" but instead, with "great anger".

Second, President Klaus is not a well-known anti-European: he is clearly a well-known European. One doesn't have to be ignorant about ouzo and one doesn't have to support flawed projects such as a pan-continental currency to be a European. In other words, the supporters of the European Soviet Union as a hypothetical future empire covering the whole continent don't own the trademark "Europe" which describes our continent itself - with all of its diversity - rather than a vague ideology whose only constant is that it is detached from reality.

Third, Klaus didn't say that the Czechs are those who work too hard. Czechs are probably somewhere in between Germans and Greeks - and arguably closer to the Germans which is not hard to understand given the geographic proximity. But Klaus didn't analyze this question in his text.

Siesta in Greece (a pause in between the breaks). ;-)

Not to offend anyone, let me talk about myself. When President Klaus writes to me that he's sure I am working 200% etc., I just ignore it because even I have the right to determine the gears and even though I can work real hard when I decide it's important and right, there are too many reasons in the real world why I often decide otherwise and my preferred number is surely not Klaus's 200%. Incidentally and correspondingly, I haven't wanted to be the president at least for 20 years. ;-) I am not ashamed of that and I would never feel offended if Klaus told me that he likes to work much harder than I do - because it's obviously the case. Someone must completely misunderstand the human freedom - and the fact that people are not identical - to be offended by Klaus's remark.

Fourth, Europe is not "becoming" fragmented when it comes to work ethics, sensitive points, and many other things. Europe has been fragmented in this sense since the first moment when humans began to live in this continent. The Greek fiscal tragedy is just one of the numerous proofs of this unquestionable fragmentation - profound differences in traditions, opinions, lifestyles, and innate aptitudes that have always existed, exist, and probably will exist in between different nations and different parts of the continent. In the past, these differences - and contradictory national and group interests - led to uncountable wars. We have mostly learned how to peacefully co-exist but that doesn't mean that we have become homogenized in the "peaceful" respects.

Fifth, if someone thinks that the main purpose of the last 50-60 years in Europe is to deny that some nations may disproportionately more often like to drink ouzo in the shadow of cypresses than others or that all citizens of Europe are obliged to deny this reality for the sake of some new and almost global political correctness, then indeed, he is going to see that those 50-60 years of work have been wasted. The life of a continent can't be built upon a big lie. It may be politically incorrect to candidly discuss these differences in Greece but it is surely OK in the Czech Republic and many other countries.

Of course, the Prague Castle is a little bit faster so Klaus needed just hours, if not minutes, to reply. He reiterated his statements and mentioned that the point of the statements were not the Greeks themselves but a broader point that he has no reason to retract. During his first-day-at-school visit to a school in Ostrava, Klaus said:


A wounded goose is honking. I haven't criticized the Greeks: that wasn't my point at all. I was saying that there are countries that are pushing the accelerator at 25%, 50%, or 100%. That there may exist countries where people may sit under the cypresses or drink ouzo. All of this is all right, it's legitimate, it's correct: the only limitation is that such countries mustn't join a currency union with Germany. And I insist that this proposition is valid.

You will have to learn how to live with this fact, Mr Papandreou. If you want to be given $150 billion a year and share the status of the most respected hard-working people and drivers of the European economic progress at the same moment, you are bound to be disappointed.

Yes, one could say that Klaus's comments may be classified as populism because most people in Central Europe agree with such observations. They're right, too. German politicians are expressing similar attitudes - and, which is related, the German citizens share similar attitudes with the Czechs. The main reason why the Germans politicians haven't been angrily replied to yet is that the Greek translators from German may be even slower than the Greek translators from Czech and a year or so hasn't been enough for them. ;-)

Not too surprisingly, the reaction to Klaus's words is even more enthusiastic among the Slovak citizens - because they had to pay according to Papandreou's "don't ask, don't tell, just pay" policy. The Slovak media typically write that statistics shows that Klaus is right and Papandreou is wrong and they explain what ouzo exactly is. ;-)
Luboš Motl v 9:04 AM
Share