NASA: Webb will probably go on

SLS to launch in 2017, bring Yankees to Mars later

Space News and many others disuss the 2012 budget for NASA. The money is going down by 3% or so but I find most of the other news positive. 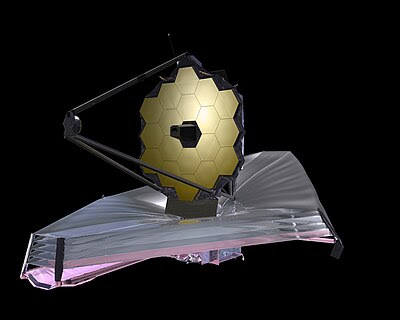 First of all, it seems likely that the JWST, the James Webb Space Telescope which is the planned successor of Hubble, will keep on going even though it got more expensive than previously advertised.


Also, I interpret the other news as a partial revival of George W. Bush's Constellation Program. Recall that Bush proposed had proposed a program to return America to the Moon and later send people to Mars. I would normally be very excited about it except that I was living in a heavily anti-Bush environment so my natural excitement was being poisoned by constant left-wing vitriol of the comrades around me. ;-)

The Constellation Program was cancelled but its Orion crew capsule was apparently preserved and recycled. Ares rockets died but SLS, the Space Launch System, may replace it and bring people to Mars or asteroids, maybe within a decade. I find such a possibility exciting. Among the realized projects, SLS would supersede the space shuttles, of course.

While I agree that science itself doesn't depend on manned missions and manned missions may be excessively expensive, I actually do support manned flights – and new challenging plans to send people to faraway places. One reason is that I still have keep some excitement of a little boy who would love to see some of the storylines from science-fiction movies come true.

The second reason is that manned flights pose new technological challenges and force the engineers to solve homework exercises they hadn't solved before. I surely think that it is a very good thing. Without such new challenges, NASA would be reduced to an agency sending hundreds of satellites with many telescopes which could be largely redundant.

There are lots of people who want to be funded and they probably often present their new projects as something fascinating even though it's almost the same thing as a previous project or it's downright redundant. This is a natural attitude of many mediocre semi-intellectual people in institutionalized science: note that even loop quantum gravity may be promoted as a useful science that should be funded if you find a sufficiently immoral liar and crackpot who does all the hype: you will always find a sufficient number of the stupid people who are eagerly waiting to be brainwashed by the cheapest lie so this side isn't a problem.

There are not too many people who have a very crisp idea about the actual value, originality, and the new information that may be brought to us by every single project funded by NASA. That's why it's so important for NASA to be solving challenges that are obviously new even from the viewpoint of millions of people - e.g. how to get people to Mars. In some sense, this task is analogous to the task of building a collider with energy above 10 TeV or something like that. Everyone can see that we haven't been there yet.

SLS, a more modest and less shiny artifact of Constellation and Ares, was mostly supported by the Congress while the rank-and-file people in NASA opposed it. Of course, the boss of NASA must promote it because he's really employed by the Congress or the White House. ;-) I actually agree with the Congress and I believe that its supervision is helping to keep NASA kind of efficient and close to the technological frontier even thought the progress in these issues will inevitably slow down because of budgetary reasons.

It's obvious that America feels that it should be saving money even when it comes to NASA. On the other hand, the budget of $18.7 billion per year is really small. Compare it with the hundreds of billions that have been wasted and are still being wasted for various climate-disruption-inspired green technology nonsense every year. It's just sad that the mankind is paying an order of magnitude more money for the suppression of the civilization than what it is paying for cutting-edge technologies to get us further.
Luboš Motl v 9:34 AM
Share