The New York Times think that the eurozone is moving towards a counterpart of the U.S.:

No doubt, the current "neither fish nor fowl" arrangement of the eurozone in which only some features of a common state are shared while others are not isn't optimal. 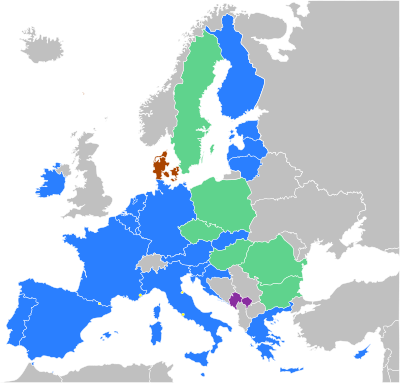 Blue: seventeen eurozone members; green: countries obliged to join the eurozone in the future, according to current laws; brown Britain: permanent exception; red Denmark: exception that may be revoked by a referendum; violet: non-EU users of the euro; yellow little spots: semi-EU users of the euro.

The usual arrangement that Nature found viable in the process of natural selection involves a stomach that has legs and hands growing out of it, with a brain on top of it. The brain figures out whether it's better to try to manually kill and eat a small bird or a tiger, the legs bring the stomach closer to the bird, the hands kill the bird, and the stomach eats the bird, returning some sugars to the brain, legs, and hands as a compensation for their services. ;-)


In an analogous way, the eurozone countries may share a common currency but if their economies and budgets evolve almost independently, they need different monetary policies. So a unified monetary policy inevitably hurts at least some of them. Those that are hurt need some help etc.

So a shared fiscal policy – which either allows a majority (or another relevant power) of the eurozone to control everyone; or that forces the healthier ones to constantly transfer lots of money to the less healthy ones is necessary for a eurozone-like bloc to function more properly.

However, you can't just add the "common fiscal policy" to the shared powers just like you won't find animals that are only composed of "stomachs and legs" (without "hands and brain"). When your new shared government imposes some new and efficient – and therefore inevitably unpopular – measures, there will be protests and you must make sure that the shared government will also be able to overwhelm the protests by a police force. So the police has to be controlled by the same shared government, too. By similar arguments, the same thing must hold for the courts and many other things.

As the map above shows, my country isn't a eurozone member although it's "obliged" to join the eurozone "at some point". In practice, it's enough to breach a condition for accession and we may continue to be outside the bloc. However, the threat is always there. If the eurozone or the EU were obviously evolving into a full-fledged unified state, I would support our exit from the EU.

I believe that a fully shared government of the eurozone would mean the end of democracy as we knew it for a few centuries. It's just a fact that the political thinking of the different nations isn't synchronized. The historical traditions, influence of religion, and lots of other things are different. The current events drive different nations differently, too. Of course, it partly boils down to their different languages.

The sort of transnational influence that would be needed for such a eurozone reshaped into a single country could lead to very worrisome events. Just a trivial example. Imagine that the unified government decides that it wants to abolish nuclear energy in the eurozone. Such a scenario is not unthinkable: Luddites have already overtaken Germany, a nation that we otherwise consider to be rational. Such people could tell others that nuclear power in other nations – including France – is dangerous or non-green, or whatever demagogic pseudo-argument that these nuts like to say, and they would make whatever fiscal decisions are necessary to make the construction or upgrade of nuclear power plants impossible.

Of course, this would lead to some internal tensions and the nations that depend on nuclear energy would rightfully demand the bombardment of Berlin, the hotbed of anti-nuclear fascism in my story. I can give you less extreme and more realistic scenarios, too.

If the European Parliament were replaced by a two-story system in which the national Parliaments or national governments send their representatives to a European government etc., you would face similar problems with an even higher urgency. Whether you like it or not, the influence of Germany in Greece or another country is an unpopular intervention by foreign powers; and a direct transfer of money from German taxpayers to Greece is an unpopular waste of money for the Germans.

All these emotions boil down to the simple fact that different European nations simply don't consider themselves to be one family. They didn't build their current wealth, traditions, and culture together. They don't have too much influence on each other. And they didn't really fall in love with each other which would push them to sacrifice everything for their new darlings. ;-)

The lack of democracy is not just an aesthetic imperfection. Democracy is needed for the government not to degenerate into an inefficient parasitic dictatorship. It's not just about some elections that take place once in four years: it's about the fear of the politicians that they may be stripped of their powers if they do something bad. They may lose their jobs in the regular election cycles; and they may lose them earlier if the media and courts expose some really bad deeds and if the people make sure that they're heard before the elections.

When it comes to democracy, my point is surely not to claim that the regular average people are ingenious or perfectly just. Most of the people are dumb. The point is that democracy is a regulating mechanism that imposes some selection – and the criteria of the selection ultimately depends on how happy the people feel which is what the governments should try to achieve, anyway. If much of the eurozone's population loses the feeling that they may influence what's going on because it's controlled by someone else, we should no longer call it a democracy.

So I think that all these attempts to create a unified country are inappropriate and artificial social engineering projects. What the experience has actually shown is that the attempts to unify don't work, so the more sensible solution should be to loosen the eurozone – and the EU – and to start to eject the most incompatible members.
Luboš Motl v 8:11 AM
Share