A. Dragić and his six equally Serbian collaborators have studied how the Forbush decreases affect the day-night temperature differences – especially in Belgrade which I visited a year ago or so.


What have they found? If they take all Forbush decreases, the effect is insignificant. However, if they compute the average of the largest Forbush decreases, they find a substantial increase of the day-night temperature difference by as much as a Fahrenheit degree around 3 days after the event: 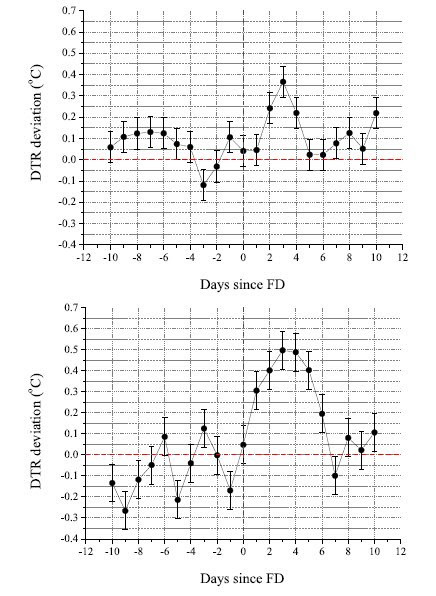 It's up to you whether you see a bump in the graphs and whether you decide it is a coincidence. I guess that much more complete and accurate surveys than the orthodox Slavs did should be possible but if the signal is real, their paper is a crucial beginning.

A higher day-night temperature difference indicates that the number of clouds is smaller – because clouds cool the days but heat up the nights a little bit, and thus reduce the temperature difference – which is in agreement with the cosmoclimatological expectation: the Forbush decreases makes the galactic cosmic rays disappear for some time (because of some massive, temporarily elevated activity of the Sun). 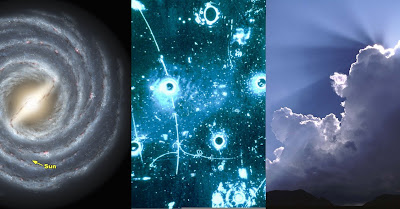 I think it's both simple and clever to look at the day-night differences because the overall noise in the temperature is suppressed while the signal caused by the clouds is kept. Just to be sure, it's obvious that clouds do reduce the day-time differences but that doesn't mean that they preserve the day-night average. At typical places, they cool the days more than they heat up the nights.

It seems that Al Gore will have to add one more bulšit to his rich vocabulary. This is one more paper, among thousands of papers, for him to deny. In this case, the scientists are not controlled by a politically correct Heuer (or hujer, as Czech readers would say) so it will be hard for Al Gore to find a quote in the paper suggesting that the authors' observations have nothing to do with the climate. ;-)

By the way, Andrew Dessler recently claimed that clouds don't matter for climate change. But here you can see the graph of the radiation going through top-of-atmosphere according to CERES; and its part that is caused by clouds. 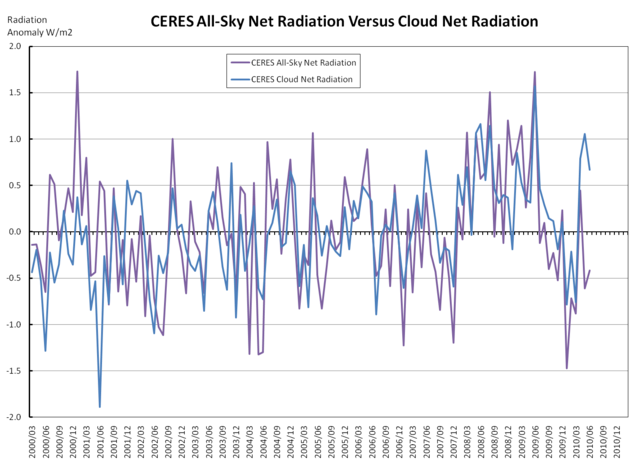 They're almost identical! And that's by using Dessler's own preferred data. Changes in clouds are responsible pretty much for all changes in the energy flows, in a sharp contradiction to Dessler's preconceived conclusion. See WUWT for more comments on this.

Now, I feel the urge to mention that the cloud cover may vary because of nearly unpredictable complex phenomena in the atmosphere; and because of controllable external effects such as cosmic rays. Both of these categories of effects have to be studied carefully if we want to understand the changes in the energy flows and temperatures.


March of the penguins: on increasing ice

By the way, why haven't you heard about Antarctica too often in recent years (in comparison with the Arctic)? Why were the penguins discriminated against (relatively to the polar bears)?

Another paper shows that between 2000 and 2008, Antarctic sea ice area was increasing by 1.4 percent a year in average. That's why.
Luboš Motl v 9:06 AM
Share